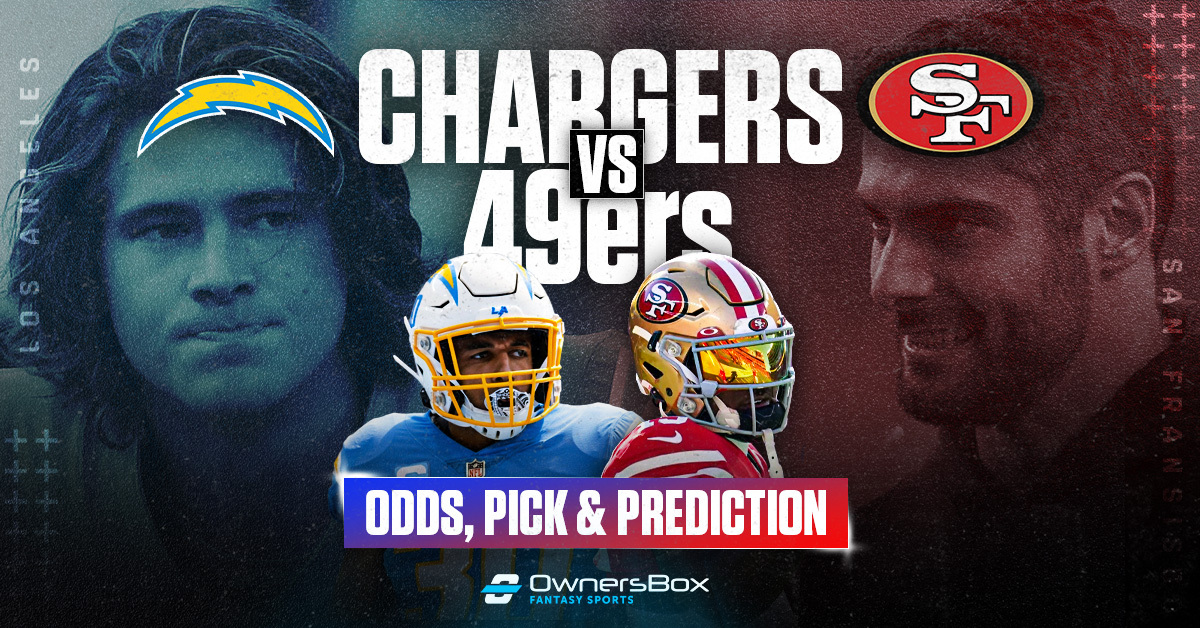 5-3 Los Angeles comes into this matchup with the 4-4 49ers as 7-point underdogs in the Chargers vs 49ers odds. Based on record alone this number appears to be a little high but since the acquisition of Christian McCaffrey, this 49ers offense is vastly improved. The Chargers cannot seem to escape the injury bug and as they head into this contest, they are expected to be without multiple impact players once again.

Justin Herbert has somehow found a way to get his team to a winning record heading into week 10. Herbert and the Chargers are 4-0 ATS on the road and although their win in Atlanta last week was not pretty, they found a way to win and cover late. The tough news for the Chargers? The Falcons are definitely not the 49ers and they are most definitely not the 49ers coming off of a bye. Kyle Shanahan can finally get McCaffrey fully involved in the offense and a matchup against one of the leagues worst rushing defenses is a welcomed sight. On the other side of the ball, the 49ers have a fantastic defense who rank amongst the leagues best in every category. How Herbert does without the likes of Mike Williams and Keenan Allen will decide who covers Sunday night.

Ontario sports betting markets have held strong on this key number of 7 on the point spread all week long. Although briefly on Sunday bettors at Caesars Sportsbook could find the 49ers at -6.5. The game total has held strong as well, dipping from 46.5 to 45.5 on Sunday night  but seeing no movement since.

The Los Angeles Chargers cannot escape injuries. Whether its a poor medical staff or just bad luck this team continues to be beat up every week. With Keenan Allen and Mike Williams both being DNP’s throughout this week it looks like Herbert will be without his two primary receiving threats again Sunday night. The injuries to the receivers has benefited Austin Ekeler and his usage. Ekeler has been fantastic this season and has scored multiple touchdowns in four of the last five games.

Justin Herbert threw the ball 43 times in Atlanta last weekend. 43 times is fine for a guy like Herbert but what changes without his receivers being active is the yards per play aspect. The Chargers averaged just 5 yards per play against a defense who is giving up an average of 6. That may not sound like a lot but when you dig a little deeper, the Falcons are second worst to only the Lions in yard given up per play this season. We all came into this season expecting a dynamic Chargers offense and we have been treated to the exact opposite. They need something to change before Sunday night to score with the 49ers.

The 49ers are the best .500 team in the NFL. Not only have they underperformed in spots but I now think they are a much more complete ball club with McCaffrey involved. The 49ers on paper match up perfect for this contest Sunday night and I would not be overly shocked to see this line jump to 7.5 before kickoff. San Francisco will also welcome back a healthy Deebo Samuel this week and as you can imagine, I would expect to see plenty of looks with both Samuel and McCaffrey coming out of the backfield alongside one another.

This will be the first week the 49ers will deploy Deebo Samuel, Brandon Aiyuk, George Kittle, Kyle Juszczyk, Christian McCaffrey, and Elijah Mitchell on the field together.

The 49ers and their new look offense will look to hit the ground running on primetime. This team is ready to go on a Super Bowl run and in a weak NFC, they are poised to do just that. The Falcons ran all over the Chargers a week ago and we now get Kyle Shanahan off of a bye with a healthy offense and two of the most dynamic players in the league to deploy. Good luck, Los Angeles.

Charges vs. 49ers Pick and Prediction

Not to pile onto the Chargers here on anything but I think this is one of the best fade spots of the season. I am grabbing the 49ers -7 here. When you compare the team totals in this game we have a 49ers total coming in at 26.5, while the Chargers are sitting at 18.5. Vegas is expecting the 49ers to score and I too believe they are going to be able to get into the high 20’s, if not the 30’s. Give me the 49ers to cover the touchdown spread with plenty of help from their newest offensive weapon.