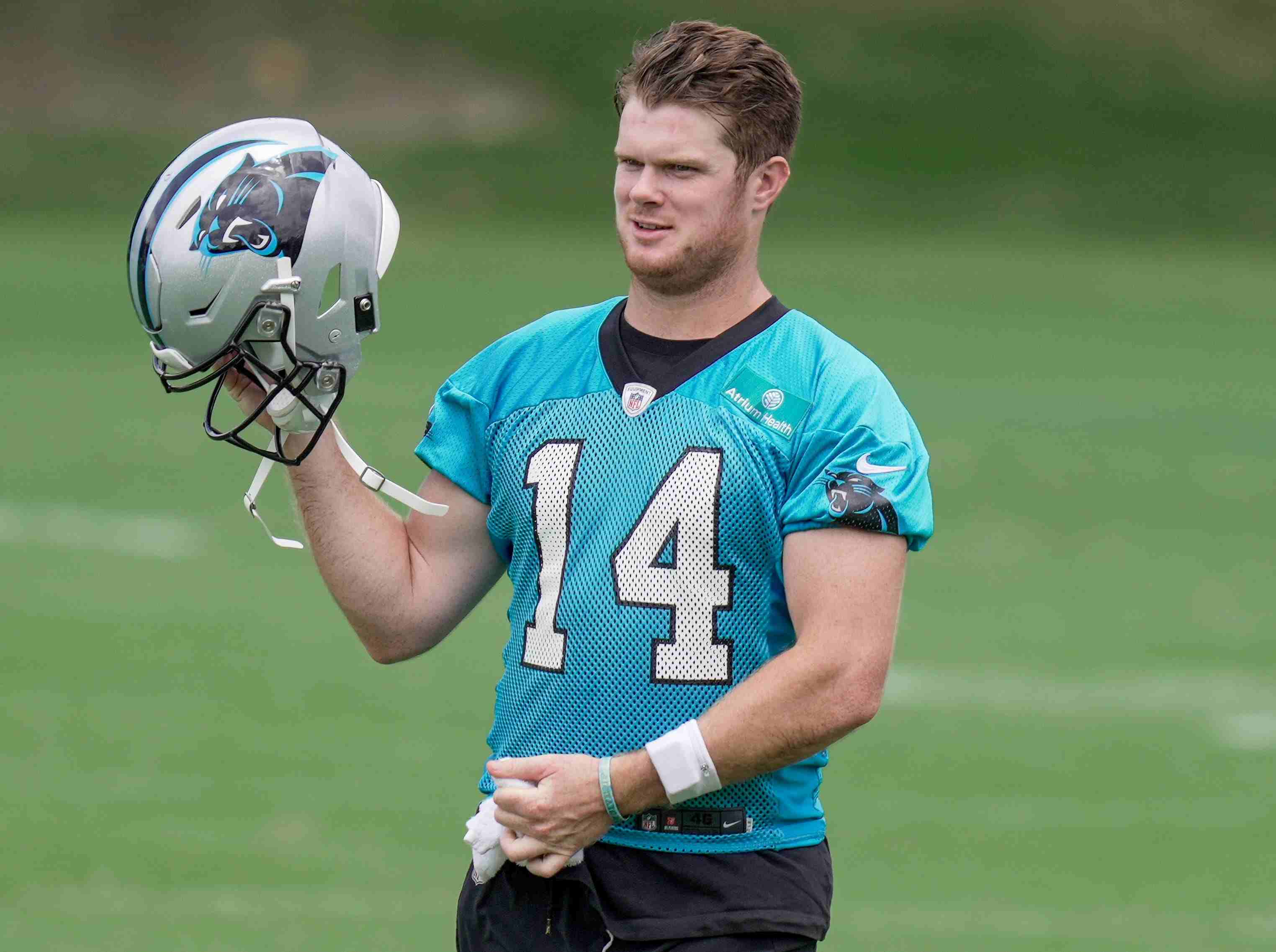 On April 5th, the Carolina Panthers acquired quarterback Sam Darnold from the New York Jets in exchange for a 6th round pick in 2021 and 2nd and 4th round picks in 2022; the Panthers subsequently picked up Darnold’s 5th-year-option for 2022.

Sam Darnold endured a rough three year relationship with the New York Jets franchise since being drafted 3rd overall in the 2018 NFL Draft out of the University of Southern California. Darnold, at times, showed great promise, but at other times it looked like his play was the cause of the Jets’ dysfunction and not a consequence of the system.

I think much of the blame can be laid at the feet of former Jets head coach Adam Gase, who seems to destroy the offense of every team for which he calls plays (hopefully after disastrous tenures as a head coach of both the Dolphins and Jets, Gase is finally out of the league, but who knows). As the Jets planned to select a QB with their 2nd overall in the 2021 NFL Draft, they traded Darnold to the Panthers three weeks before the draft, and selected quarterback Zach Wilson at 2nd overall.

Interestingly, Justin Fields was available in the 2021 NFL Draft when the Panthers were on the clock at pick 8, and the Panthers chose to stick with Darnold and select cover corner Jaycee Horn with the 8th overall selection. Darnold and Fields’ careers will now be eternally linked by Panthers fans as if Darnold falters in Carolina and Fields excels in Chicago, fans will question why Panthers management passed on Fields.

Sam Darnold gets a second chance to excel with the Carolina Panthers. This is a great situation for Darnold as he is free from Adam Gase and free from the toxic culture of the New York Jets organization. 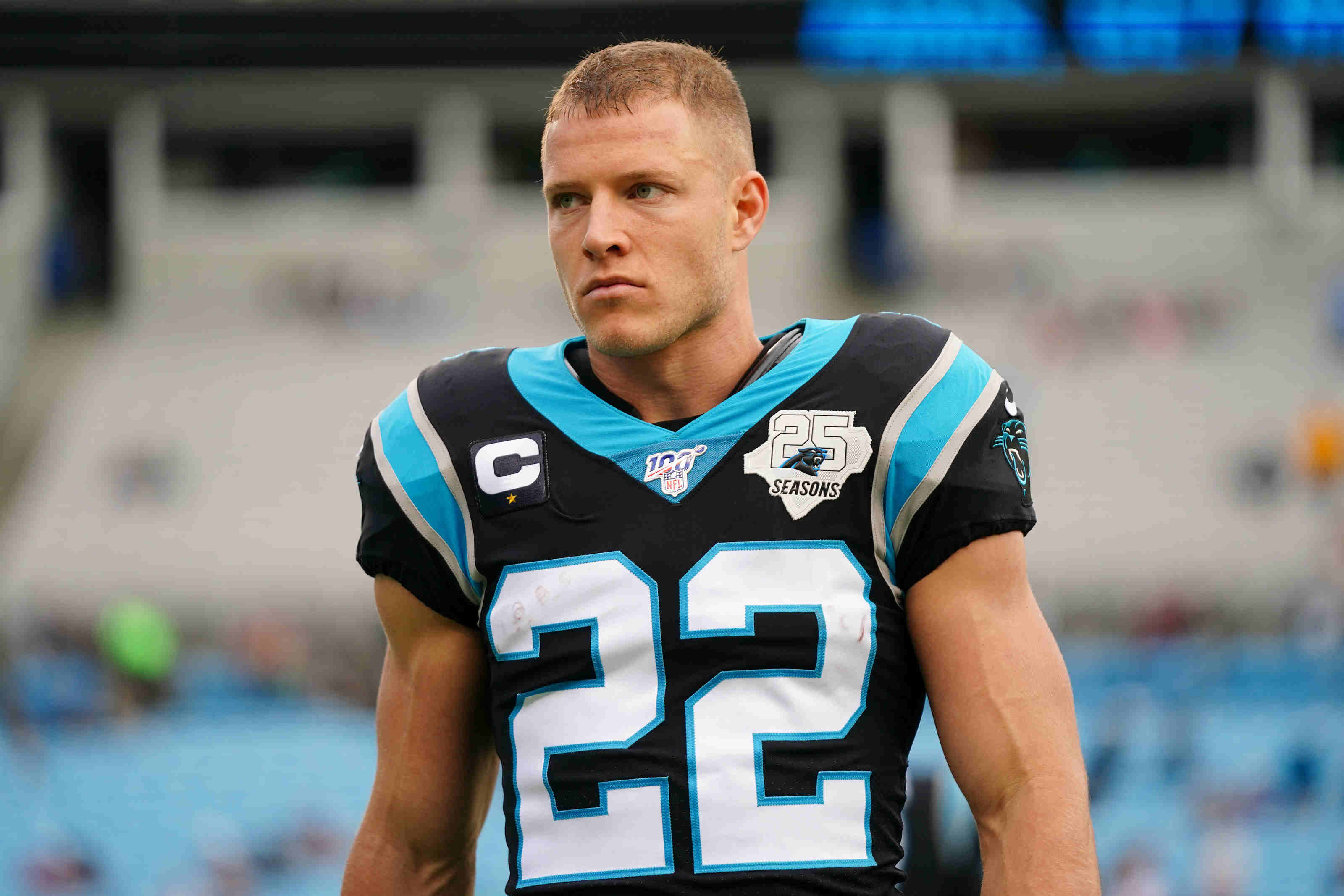 The Panthers offense enters 2021 with a new quarterback in Darnold, the best running back in the NFL in CMC, and a budding star at wide receiver in DJ Moore. Throw in their new offseason additions and this is a team that can make some noise and score some points. The offensive line is perhaps a point of weakness and what may hold back the Panthers offense from taking the next step. Lets get into some key additions and losses from the past off-season.

Like I said in the story of the offseason, Darnold is getting a second chance and fresh start in Carolina. Panthers fans should be excited to see if head coach Rhule and offensive coordinator Joe Brady can help Darnold reach is massive potential. Darnold needs to protect the ball and better decision-making in the passing game. If Darnold can become a better game-manager, he has the talent to truly excel as an NFL quarterback.

In fantasy drafts this season, Darnold is a great option in 2QB leagues, as he should definitely outperform his best season at MetLife Stadium. Overall, exchanging green for Carolina blue may be the thing that saves Darnold’s career, and perhaps even begins a new positive era in the history of the Carolina Panthers.

The Panthers drafted wide receiver Terrace Marshall Jr. in the 2nd round out of LSU. Offensive Coordinator Joe Brady is very familiar with Terrace Marshall from his days on the LSU coaching staff. Marshall is an athletic big body receiver with speed, similar to another former LSU wide receiver DJ Chark. Marshall has been making a ton of noise through the first few weeks of Panthers training camp and looks like a great bet to breakout in his rookie year.

While DJ Moore and Robby Anderson will remain the top two targets in the offense, the lack of tight end production in Carolina opens the door to a third wide receiver excelling. Take a chance on Marshall with a late pick in your fantasy drafts this season or in weekly fantasy contests on OwnersBox.

Oklahoma State Cowboy running back Chuba Hubbard was drafted by the Panthers in the 3rd Round of the 2021 NFL Draft. Hubbard is certainly an interesting case. In 2019, he was perhaps the best running back in college football as he racked up over 2000 rushing yards in 13 games. In 2020, he took a significant step back in production with only 650 yards, albeit in 7 games. Hubbard nonetheless displayed his potential in 2019 to rack up yards.

If CMC were to face another injury (lets hope not he’s awesome), Hubbard would step in as the primary ball carrier as the only other notable running back on the depth chat. Hubbard, being from Edmonton, Canada, has tons of potential and has a great chance at being the best running back ever from Canada.

Dan Arnold joins the Panthers after a semi-breakout season with the Cardinals in 2020 producing 31 catches for 438 yards. Unfortunately for Arnold, he is leaving a system in Arizona that features tight ends the least among NFL teams  in the passing game for a system in Carolina that perhaps utilizes the tight end second least. Arnold will compete for reps in Carolina, but I am not betting on him being the replacement for Greg Olsen the organization has been looking for since the past couple seasons.

Wide Reciever David Moore leaves Seattle via Free Agency for warmer weather in Charlotte where he will be the second most important D. Moore in the Panthers wide receiver room. Moore will provide depth for the Panthers at wide receiver behind DJM, Robby Anderson, and rookie Terrace Marshall Jr.

The one downside of the Panthers offseason is the team did little to bolster their offensive line in either free agency or the draft. Elflein and Erving are average lineman and will provide veteran depth to the offensive line.

The Panthers traded quarterback Teddy Bridgewater to the Broncos for a 6th round pick this offseason. With the trade for Darnold, Bridgewater’s contract became expendable. Bridgewater will compete with Lock to for the starting job in Denver.

Curtis Samuel departs the Panthers for the Football Team on a massive 3 year $34.5 million contract. Samuel has been a staple on the Panthers’ offense since he was drafted in the 2nd round out of Ohio State in the 2017 entry draft, but his big potential never was really maximized in Carolina. During the 2020 season, Samuel finished with 1050 yards and 5 touchdowns, seeing an increased role with CMC missing almost the entire season. The Panthers were able to replace Curtis Samuel with Terrace Marshall in the 2nd round of the 2021 NFL Draft, but Samuel ability to play a hybrid WR/RB/TE role out of the slot will be missed.

Running back Mike Davis filled in valiantly while CMC was out for most of the season with injury. Mike Davis departs Carolina, cashing in on his stellar play with a two-year contract with the arch-rival Atlanta Falcons. You can’t really blame Mike Davis for transferring to the Falcons as the best running back in the NFL Christian McCaffrey is still occupying the Panthers backfield, and Atlanta’s backfield is wide open, so there is much more opportunity for volume it ATL. 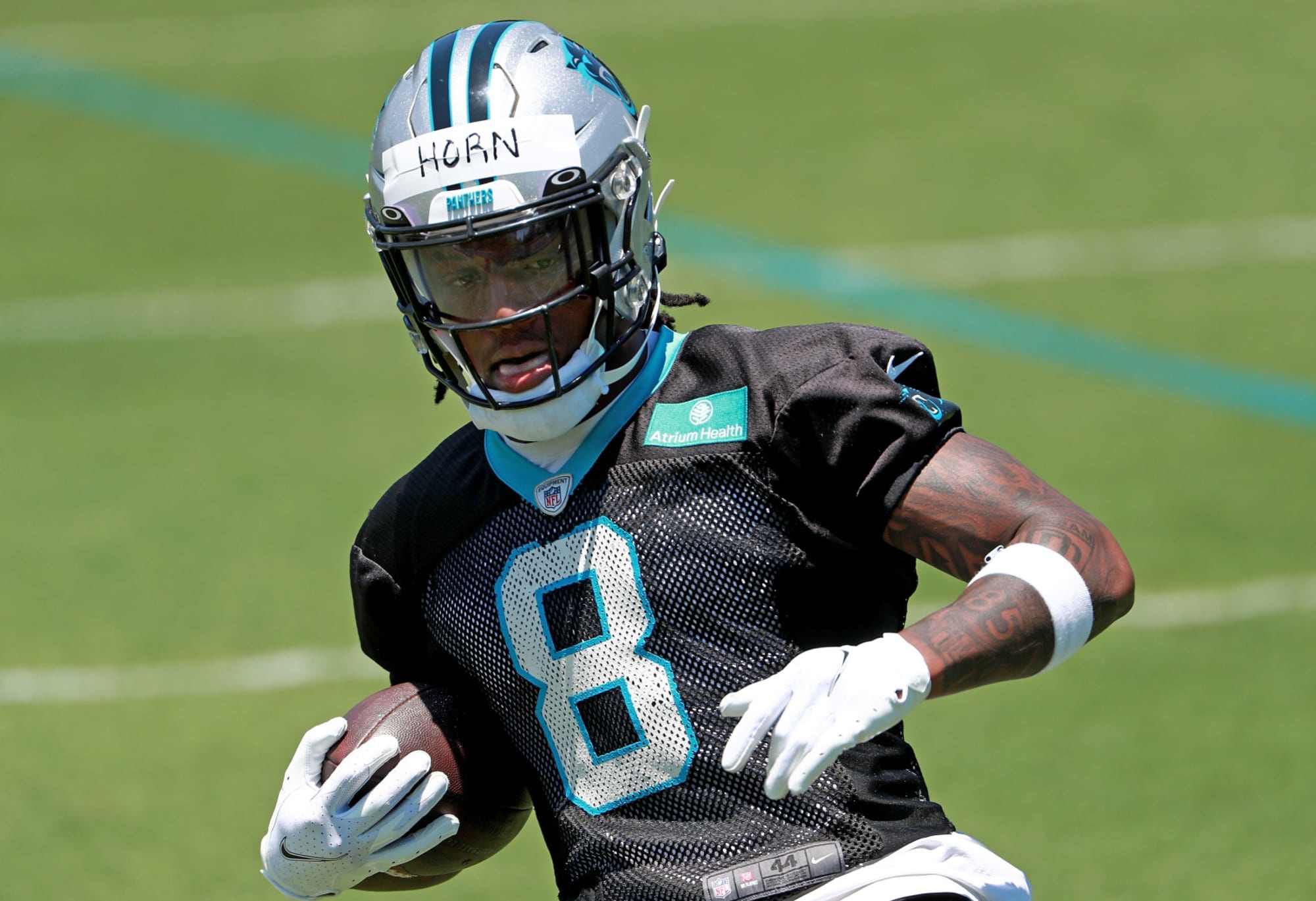 The Panthers used the 8th overall pick in the 2021 Draft to select cornerback Jaycee Horn out of the University of South Carolina. As Columbia is only a short drive from Charlotte, the Panthers scouts definitely got a good look at the cornerback playing for the Gamecocks. Horn was an interesting selection as many had the Panthers either selecting quarterback Justin Fields or athletic cornerback Patrick Surtain III out of Alabama.

Horn was sharp pick by the Panthers as a lock down corner has been missing since James Bradberry signed with the Giants and with the NFL passing more and more each season, skill at corner is essential for stopping drives before they reach the red zone. Jaycee Horn is supremely talented should contribute out of gate for Panthers this season.

This offseason, cornerback A.J. Bouye signed with the Panthers on a 2 year $7,000,000 deal. Bouye was a fantastic signing as he has played well for the Broncos and Jags last few season, and pairs well with Horn to solidify the Panthers cornerback position, which has been a position of need for the Panthers.

Haason Reddick is slam dunk signing by the Panthers this offseason with one year at $8,000,000 . A first round pick by the Cardinals in 2017, Reddick had been somewhat of a disappointment before breaking out in 2020 to the tune of 12.5 sacks. Fortunately for the Panthers, the Cardinals turned down Reddick’s fifth year option prior to the 2020 season. Reddick provides a great combination of pass rush and run stopping that will bolster the Panthers solid defensive front.

The Panthers had no discernible losses on the defensive side of the ball this offseason which is rare for any NFL team. The Panthers will definitely be better this season, but the question is how much better? 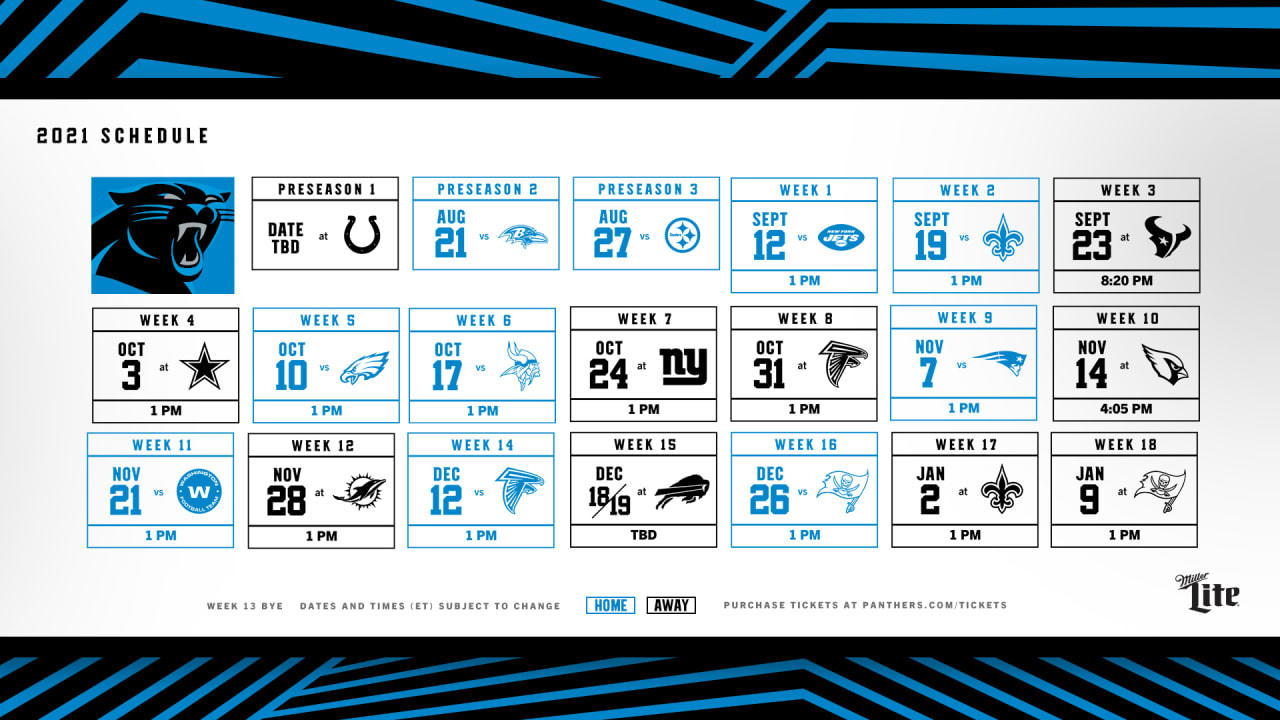 Carolina’s schedule starts off light with matchup against the lowly Jets and Texans, and a home matchup against the banged-up Saints that usually struggle away from the Super Dome. I predict the Panthers jump out of the gate at 3-0, maybe even make it to 5-2 through Week 7 with wins against the Eagles and Giants, but the rest of the way the schedule gets hard with out of division matchups with the Patriots, Cardinals, WFT, Dolphins, and Bills. I think the Panthers could maybe ,pull out wins against the Falcons, Football Team, and Cardinals and finishing a respectable 8-9 on the season, but ultimately missing out on the playoffs again this season. 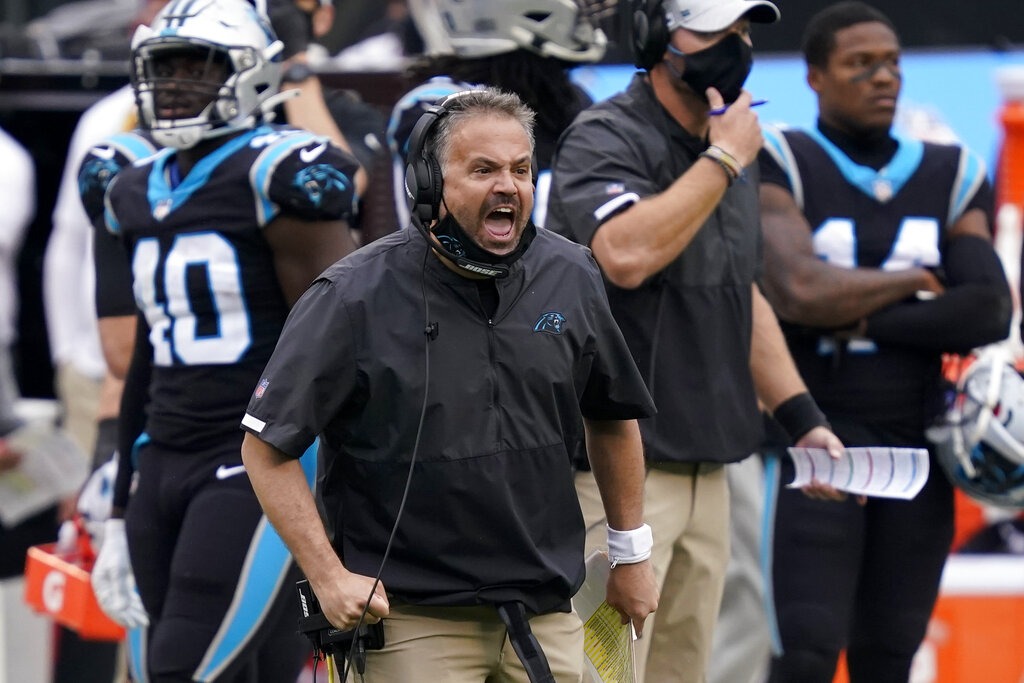 While I think Darnold will succeed in Carolina, the Panthers will need Darnold to be the breakout player of the year in the NFL for the team to make the playoffs and contend. The defense is above average but is just not dominant enough to win games for the team on its own. The Panthers have a tough schedule and will be hard pressed to make the playoffs the season, especially while the Bucs are dominating the division. CMC can win a few games against bad defences for the Panthers and keep them competitive during the season. There is a lot of hope for the Panthers future, especially if Darnold gets his career back on track in Charlotte.