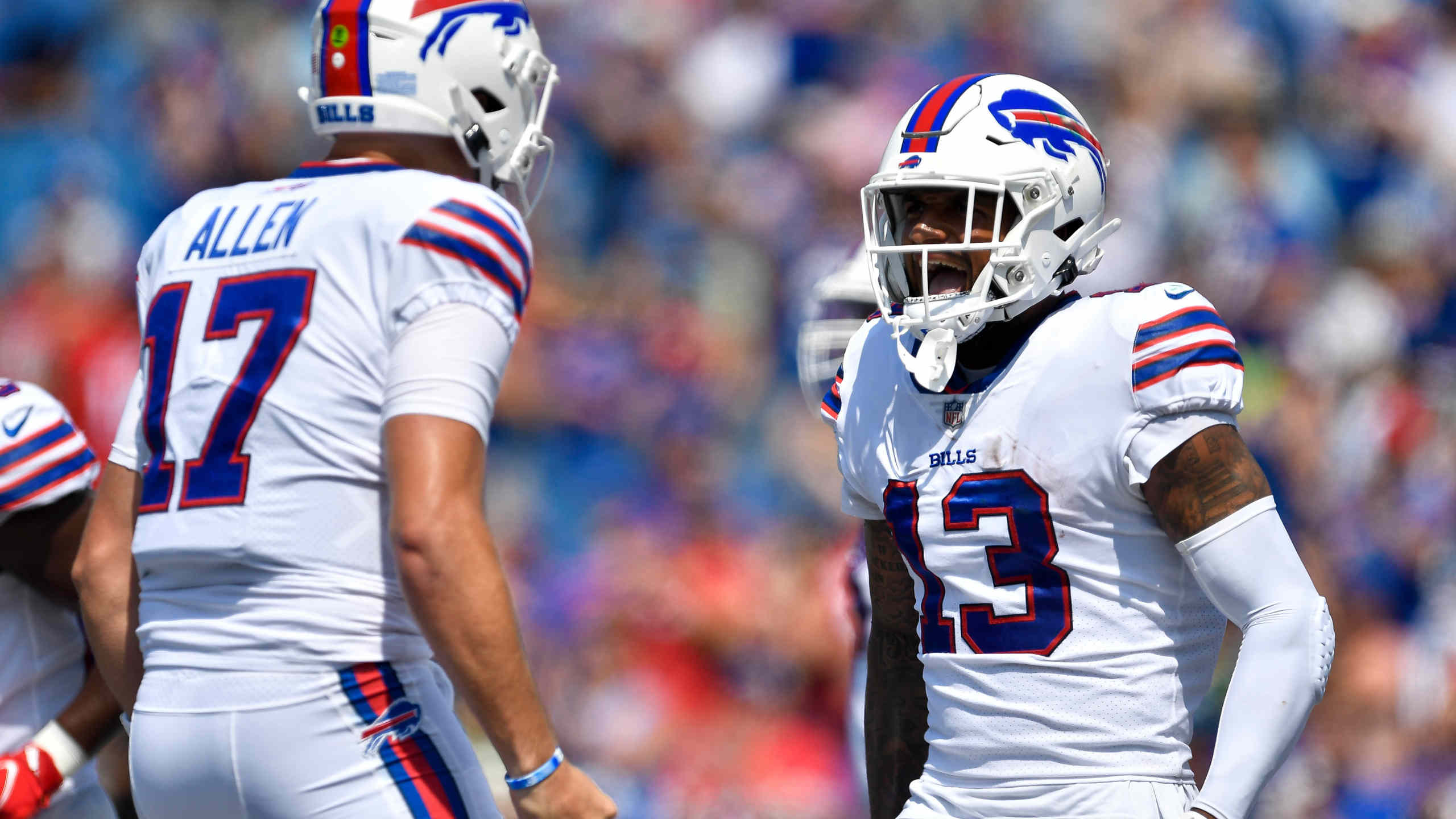 The Buffalo Bills had a very strong 2020 season, which saw the rise of a future Hall-of-Famer in Josh Allen. We also saw the acquisition of Stefon Diggs paying major dividends as he stapled himself into the NFL’s top wide receivers last season.

For this upcoming season, the Bills have a very good chance of winning the Super Bowl. They have an elite offense and a stellar defense to complement the offense. They have added veteran receiver, Emmanuelle Sanders to their already crowded receiving team. If all the pieces align, the Bills could be hoisting the Lombardi trophy at the end of the year. 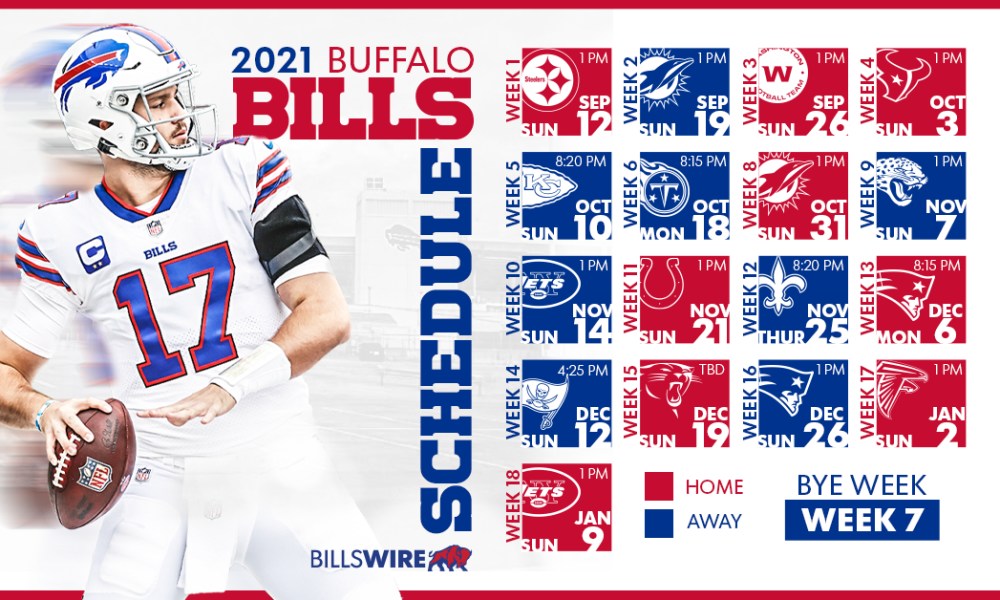 The Buffalo Bills have the 23rd hardest strength of schedule based on opponents’ 2020 win percentage (find it here).

Hardest Games: There are two games on the Bills schedule that are circled in my mind. This includes Week 5 at Kansas City against the Chiefs and Week 14 in Tampa Bay against the reigning Super Bowl champions. The Chiefs will continue to have a powerhouse of an offense with Patrick Mahomes controlling the offense. They have the most dangerous offense in the NFL and have a solid defense to complement the offense. This will be the first time the Bills and Chiefs face-off since their AFC championship matchup last playoffs.

The next hardest game is when the Bills travel to Tampa Bay to play the defending Super Bowl champions. The Buccaneers have all 22 of their starters returning and will have its first real training camp with Tom Brady as their quarterback. The Buccaneers have a top defense who should only get better as some of their top players were rookies last season.

Easiest Game: I think the easiest game in Week 4 at home against the Houston Texans. The Texans have been a disaster ever since they decided to trade DeAndre Hopkins to the Arizona Cardinals. Since then, they have lost wide receiver, Will Fuller, and defensive end, JJ Watt. The Texans also have their franchise quarterback, Deshaun Watson, in deep legal trouble and he has officially requested a trade from the Texans. They have entered full rebuild mode, which means this should be an easy win for the Bills.

Most Exciting Game: The easy answer is the Buccaneers game or the Chiefs game. A surprising game I am excited for is when the Bills travel to New Orleans to play the Saints. The Saints recently named Jameis Winston as their starter for the season, which means lots of offense! I’m excited to see Josh Allen and Jameis duel off with each other. Hopefully, we see a high-scoring exciting game.

Josh Allen was fantastic last season and has paved his way as a top 5 quarterback in the NFL. The Bills should improve this year as Allen will continue to get more comfortable in the NFL. Last season was a breakout season for Allen, but he should make another step forward in 2021. The Bills season outlook is heavily influenced based on Josh Allen’s success in the NFL.

This is a freaking missile

The Bills have been running a split-share back-field between both Moss and Singletary. None of them has taken sole possession of the RB1 spot for the Bills. In 2021, I see Singletary getting the bulk of the carries, but Moss getting most of the red-zone touches. I see touchdown upside with Moss.

Moss only played 13 games compared to Singletary’s 16 games. Moss still finished the year with 3 more touchdowns than Singletary. Expect none of these running backs to take over RB1 unless one of them gets injured.

The Bills have assembled a solid wide-receiving core for the 2021 NFL season. Stefon Diggs and Josh Allen’s connection was unbelievable last year, I expect this connection to grow into something potentially even stronger. Diggs wanted a fresh start with a team who wasn’t run heavy all of the time, turns out Diggs was right. Diggs is now considered a top 5 wide receiver in the NFL in a lot of football experts’ eyes.

Cole Beasley was a very nice addition to the Bills as well. Josh Allen has given praise to Beasley’s route running abilities and how much separation he creates with defenders. Beasley is one of the best slot receivers in the league. The Bills have added veteran Sanders to this jam-packed receiving core. I think Sanders and Davis will battle each other for reps. I see one of these two receivers having a phenomenal season.

Will Gabriel Davis have a BREAKOUT season?

Davis is only 23 years old, played his college football at UCF. He had a solid rookie season last year and I see him building off his success. The one interference in his production is the signing of Sanders. This could potentially hurt Davis stock for a breakout season with the Bills. I think it’s more important for Davis to learn from these veterans, so when the time comes he can take full control of the WR2 spot. Davis is a very exciting piece for Buffalo Bills fans.

The Bills’ defense wasn’t outstanding in 2020 compared to previous seasons. I’m expecting a different story for the upcoming season, predicting a top 10 defense by the end of the year. The Bills have some high-caliber players such as cornerback, Tre-Davious White, who is considered one of the best cornerbacks in the NFL. They also have safety, Jordan Poyer, who is very strong at his position and should have another great season.

#Bills defense seems to be clicking this preseason. 💪