Broncos vs Chargers Odds, Preview and Betting Pick for MNF 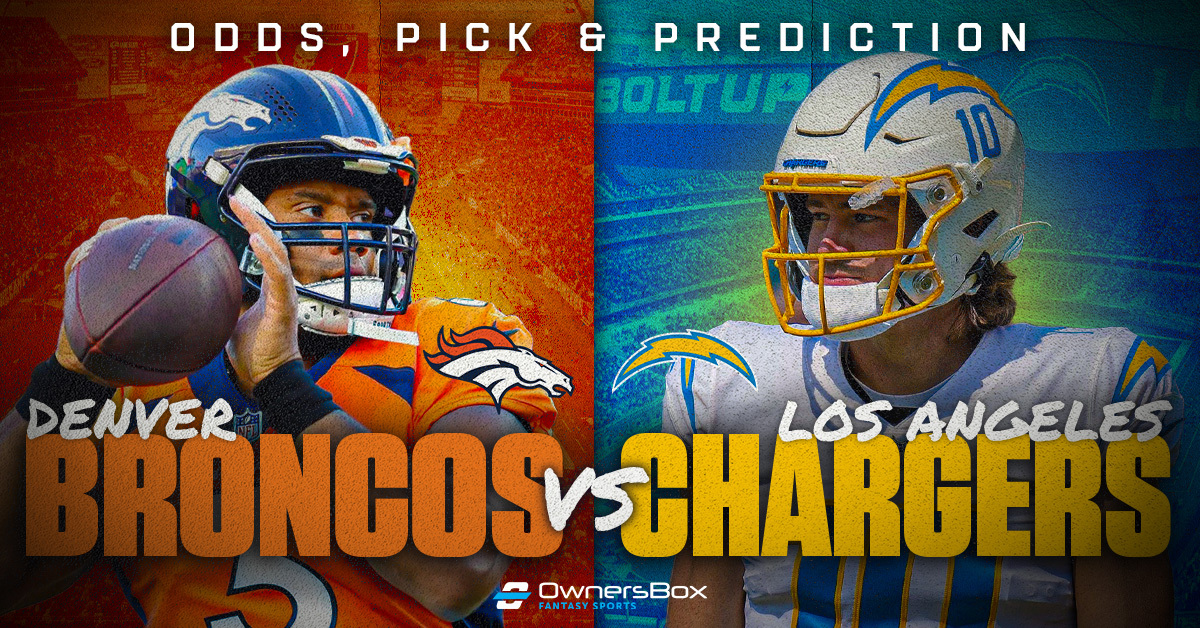 Primetime games have been abysmal over the past few weeks and sadly for us, we get Nathaniel Hackett back in the spotlight.  The Hackett led Broncos travel to Los Angeles to take on the Chargers as 4.5-point road underdogs, while the game carries a total of 45.5 in the Broncos vs Chargers odds.  This matchup between AFC West teams will almost assuredly feature another below average showing from Russell Wilson as he has been dealing with a shoulder injury.  The Chargers also have an incredibly long injury report and although they are coming off of two straight wins, their defense has given up a combined 52-points.

The 12-9 Broncos loss against the Colts is probably still fresh in the mind of a lot of you and regardless of how hard I try to forget about it, I just can’t shake the image of Russell Wilson saying “let’s ride” in his postgame press conference.  This Denver team has one of the most inefficient offenses in the league and until Russell Wilson figures out how to play well under Nathaniel Hackett, the Broncos are a team you want to steer clear of when betting sides.  This matchup is far less exciting than it looked a month ago but it is being played in a primetime spot and regardless of how much everyone complains, we all know we’ll be tuned in. Before we jump into the odds, a good thing to take note of is the Chargers being 4-1 ATS this season, while the Broncos are 1-4.

Colorado sports betting markets have been able to collect a lot of money off of Denver backers this season. The Broncos are 1-4 against the spread this season, while the Chargers are 4-1 in 2022. DraftKings Sportsbook is offering the best moneyline price on the Broncos, listing a generous +195 in the Broncos vs Chargers odds.

To make things worse for the Broncos, Russell Wilson is dealing with a strained latissimus dorsi muscle in his throwing shoulder.  Although he is not missing practice time, you’d have to imagine this injury does impact the passing game.  The Broncos offense was already underperforming before Wilson suffered this injury and now with the loss of Javonte Williams in the backfield, I just cannot fathom how they improve here.

#Seahawks committed grand larceny with the Russell Wilson trade to Denver.#Broncos gave up:

And the Seahawks were the ones that improved at QB (with Geno Smith) pic.twitter.com/erjtkMegER

This AFC West matchup has seen the home team win the past four meetings and that further influences my skepticism in the Broncos here.  Some may reference the extended off week the Broncos are coming off of and yes, I do think it could help but no, it is not going to fix all of their problems.  Turning the page to the defense side of the ball, not all things are bad in Denver.  This Broncos defense has come together nicely and they are currently third in the NFL in yards/game against. To cover this 4.5-point spread on the road, the Broncos defense will need to show up in a big way.

The Chargers have faced some of the worst injury luck in the league but have still managed a winning record through five games.  This Chargers offense has relied on running back Austin Ekeler as of late and he has looked fantastic. Ekeler put up a combined 199 yards last week against the Browns, which included two touchdowns. Ekeler leads all backs in receptions and receiving yards, while also leading the league in yards after catch.

The Chargers coaching decisions down the stretch in Cleveland were questionable to say the least and if Cade York makes a late field goal, the discourse around this team is probably very different.  Brandon Staley is often times his own worst enemy and in a must-punt spot late in the game, he decided to go for it which probably should have resulted in a Chargers loss.  He put his team in a position to lose and going forward, it is hard to ignore his ability to not only blow up his own teams chance at winning, but also influence the way a bet may swing late in the game.

Broncos vs Chargers Pick and Prediction

The under.  The under is the play here.  The Broncos have a terrible offense and a defense who should keep them in the game.  I just see this divisional matchup playing to a 23-17 style outcome while the Broncos continue to attempt to figure it out.  Nathaniel Hackett vs Brandon Staley will see some outlandish coaching decisions but hopefully in this one, these decisions positively influence our under.

I decided early in the week that I will not be touching any props on either team and because of that, I am just riding the under.  One play for primetime games might just be the way to go this season anyways.