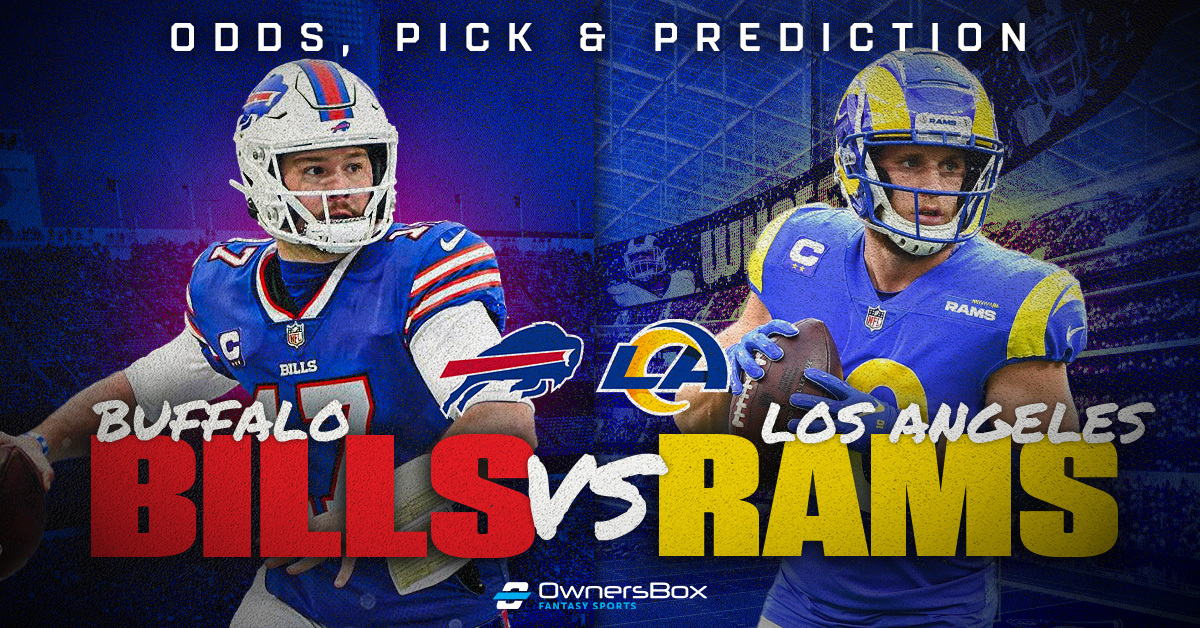 My good god the day has finally come, NFL football is back. The 2023 NFL season starts with the reigning Super Bowl champs taking on the current Lombardi Trophy favorites. The Buffalo Bills head to SoFi Stadium to take on the Los Angeles Rams on Thursday, September 8th, 2022. Buffalo are short road favorites in the Bill vs Rams odds.

Use the BetMGM bonus code ‘OWNERSBOX’ and get a $1,000 risk-free bet for Bills vs Rams.

New York sports betting markets get to experience their first regular season Thursday Night Football game as a legal betting state. The in-state team is listed at -135 to win straight up in the Bills vs Rams odds.

To be honest, this Bills team is the best in the NFL, and the sportsbooks agree with me. Buffalo are favored in the latest Super Bowl odds at +200 to lift the Lombardi Trophy.

However, in this game, they’re coming in a little shorthanded. Their elite cornerback Tre’Davious White is out and Jordan Poyer did not practice at all in August and will most likely not be at 100%. That leaves rookie Kaiir Elam and Dane Jackson to cover Cooper Kupp and Allen Robinson.

The Bills on offense lack anything but talent. The receiving corps of Stefon Diggs, Dawson Knox, Gabe Davis, and Isaiah McKenzie bring a great combo of size and speed. Not to mention, a backfield that includes Devin Singletary and rookie James Cook. And at the helm, Josh Allen, who finished as the third best overall QB according to PFF in 2021, along with being the most efficient rusher.

The Bills scored just under 30 points per game last season as the number one scoring offense in the NFL. Despite the Rams’ stout defensive line and Jalen Ramsey, I expect the AFC East Division favorites to put up points.

Although the Rams won Super Bowl 56, they are the fifth betting favorite. Von Miller left for Buffalo, but the Rams quickly replaced him with Bobby Wagner.

Both secondaries are susceptible in this game. PFF ranks the Rams secondary ninth heading into the season, but without Jalen Ramsey that unit could easily drop into the 20s. David Long Jr, Taylor Rapp, and Troy Hill all had PFF coverage grades below 65 last year.

The @RamsNFL in Week 1 under Sean McVay

As I mentioned above, Matt Stafford won’t have to face a full Bills secondary. Instead, he’ll see a banged-up Jordan Poyer, rookie Kaiir Elam, and Dane Jackson. With Van Jefferson expected to be sidelined, Allen Robinson could have a huge debut in a Rams uniform.

With all the news in the secondary, I’m surprised the total hasn’t moved more in the Rams vs Bills odds.

Both of these offenses were electric last year and are led by two stud quarterbacks. There’s been reports about Stafford’s nagging shoulder injury. It’s the NFL, grow up, he’s fine.

The over has hit in four out of the last five meetings between these two teams, and the last game featured just under 70 total points. The total has been floating around 51 to 52.5 for the last two weeks now, but I think any number at 52 or below is a hit. Pull the trigger on over 52.0 at -110 in the Bills vs Rams odds on Thursday night.

I’m also hopping on Allen Robinson Over 59.5 reception yards. I’d take it up to 62 with White out and Poyer, not at 100%. Available at DraftKings Sportsbook and tons of other NFL online sportsbooks.