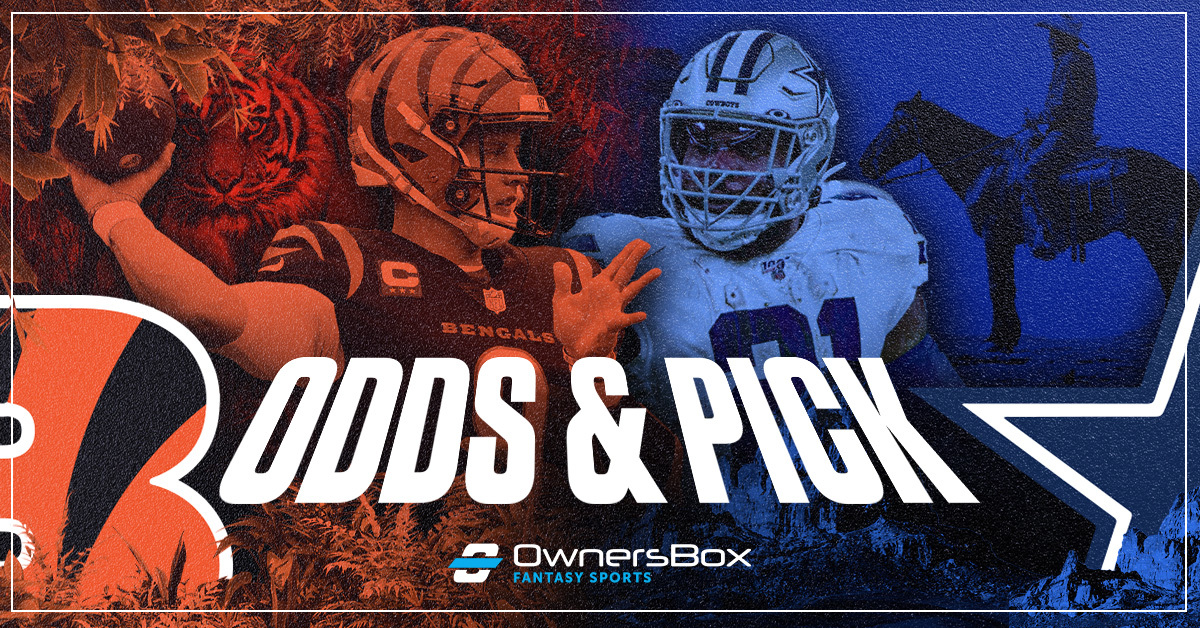 Fresh off a heartbreaking overtime loss to the Steelers, the Bengals will host the Cowboys on Sunday, Sept 18 at 4:25 PM EST in their NFL Week 2 matchup. Dallas got blown out by Tampa Bay in the season opener, and the Cowboys were the only team to not score an offensive touchdown in Week 1. Dallas lost Dak Prescott to a finger injury late in the game, and he’s already been ruled out for Week 2 as Cincy is pegged as road favorites in the Bengals vs Cowboys odds. That leaves a Joe Burrow vs Cooper Rush QB battle in this intriguing contest.

Cincinnati is heavily favored, getting a touchdown on the road at Jerry’s World. If you’re thinking about betting the ML, remember, you’ll have to wager $355 just to win $100 on Cincinnati. There’s money to be made if you believe in Dallas as a straight up winner at +278, but it’s a risky proposition to roll with a QB making his second career start against last season’s AFC champions.

Use the Caesars Sportsbook promo code ‘OWNERSBOXFULL’ to get a $1,250 first bet for Bengals vs Cowboys in Week 2.

Ohio online sports betting markets aren’t open until January 1st, 2023. However, Betfred is the official betting partner of the Cincinnati Bengals and will look to have a betting kiosk at Paycor Stadium.

Joe Burrow had the worst game of his career in Week 1. Was it a Super Bowl hangover that often plagues championship contenders? Was it the fact that Burrow didn’t play a single snap in preseason? Perhaps it was the elite Steelers defense, or maybe it was just one of those games. Whatever the case, we can reasonably say that Burrow’s performances can only get better from here.

Joey B has never committed multiple turnovers in back-to-back games in his career, so there’s plenty of room for optimism when backing the Bengals on Sunday. Cincinnati was 8-2 ATS on the road last season, tied with Arizona for the second-best mark in the NFL.

Joe Burrow's first-ever completion to Ja'Marr Chase – was at AT&T Stadium (home of the Dallas Cowboys).

"Everyone keeps asking me if I've played there before… I did."@WCPO @JoeyB @Real10jayy__ #Bengals pic.twitter.com/u9n0WsBpzJ

Cincinnati is 2-7 against Dallas since 1990 and has lost all four games in Dallas in that span. Those numbers might make backing Cincinnati intimidating, but don’t let them fool you. This is a team that almost won in Week 1 despite committing five turnovers facing a team playing its second-string quarterback.

This is why I believe the 7.0-point spread isn’t eye-popping in the Bengals vs Cowboys odds.

Cooper Rush has started one game in his career, which was a 20-16 win against the Vikings last season. In that one, he hit the blazingly fast Cedrick Wilson for a 73-yard TD where Wilson raced past defenders.

Rush hit Amari Cooper on an end zone fade in the final minute of the contest to secure the come-from-behind win. The problem is that neither receiver is with the team now, and Dallas is left with just CeeDee Lamb, its tight ends, and running backs.

Michael Gallup is doubtful, and Lamb is sure to draw a ton of defensive attention as a result. He didn’t have the best game in the world to start the season, and it’ll be an uphill battle for as long as Dak is out.

Cowboys WR CeeDee Lamb caught 18.2% of his targets (2-of-11) vs. Buccaneers, the lowest rate of the 89 players who saw five or more targets in Week 1. Bucs undercut many of team's routes. He'll look to find better rhythm, separation Sunday vs. Bengals. pic.twitter.com/9ssNQcpT6w

Over the last five seasons, Dallas is 6-1 ATS as home dogs. The only game in which they didn’t cover was Week 1 against the Buccaneers. However, this is a different team, with offensive line issues, Ezekiel Elliott who, doesn’t appear to be in his prime anymore, and the worst receiving corps in a decade.

The Cowboys were 8-1 ATS on the road compared to just 5-4 at home last season. Is this the spot in which they’ll cover as home dogs in the Bengals vs Cowboys odds?

The Bengals went 5-4 to the over as favorites but just 2-8 on the road last season. Dallas was 5-4 to the over at home. I wouldn’t expect much scoring from Dallas this week. The team looked terrible with Dak at the helm, so the switch to Cooper Rush isn’t likely to improve things on offense.

Cincinnati should get points on the board, but the combined score going over 41.5 in the Bengals vs Cowboys odds seems highly unlikely.

This feels like a prime bounceback spot for Joe Burrow after such a poor showing in Week 1. Dallas needs to pick itself up off the mat and move forward, but this won’t be the week to do it. This is a perfect storm of an elite team hungry to prove itself against a struggling team missing a ton of key pieces on offense. I’m taking the Bengals to cover.

Joe Burrow has too many excellent weapons at his disposal not to cash his TD prop this week. Studs Ja’Marr Chase and Tee Higgins are joined by Tyler Boyd, Hayden Hurst, and Joe Mixon in one of the most lethal passing attacks in all of football. If Higgins ends up not being able to play, Tyler Boyd will be a great NFL DFS wide receiver pick in any contest.

Burrow threw for at least two touchdowns in 11 of 16 regular season games and two of four playoff games last season. We’re booking a bounceback in Week 2!