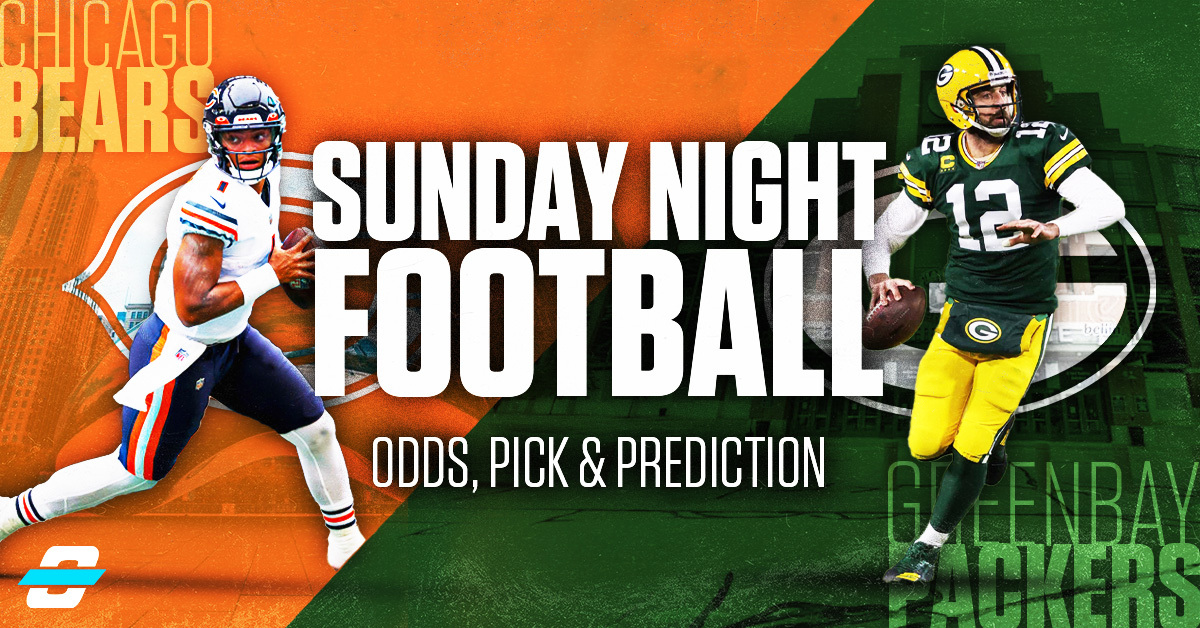 Week 1 of the NFL season is in the books and as we head into the Week 2 slate, we have two teams who are coming off of much different Week 1 outcomes. The 0-1 Green Bay Packers are hosting the 1-0 Chicago Bears on Sunday Night Football, live from Lambeau Field in Green Bay, Wisconsin.  Green Bay are 9.5-point home favorites in the Bears vs Packers odds, and the game holds a low total of just 41.5. The Bears come into this game as surprising Week 1 winners and will look to spoil the Packers’ home opener in primetime.

Odds as of September 17th at DraftKings

Illinois sports betting apps have the Bears to win outright at +360. Users looking to bet on the Bears can get a $1,000 deposit match bonus for this Sunday Night Football matchup.

Yes, the Bears are 1-0, no, they are not very good. The Bears beat the 49ers in a game that looked like it was being played in the 1980s. The rain not only made the visuals look like a disaster but also the field, which ended up playing directly into the hands of the home team. Although I do believe in Justin Fields, the weather in Green Bay on Sunday night is slated to be partly cloudy and pleasant, which will allow us to figure out who this Bears offense truly is.

Speaking of the Bears’ offense, they will be faced with playing a defense we faded a week ago. That defense does not have to play Justin Jefferson this week and in turn should be able to settle into the season and control the game, considering Fields’ lack of offensive weapons.

Week 1 went exactly how I thought it would for the Green Bay Packers. With a new group of wide receivers, Aaron Rodgers has said it himself, they need time. With Allen Lazard expected to be back in the lineup Sunday night, this offensive unit will be able to begin to form chemistry against an inferior opponent in the Bears.

Rodgers and this Packers team have been written off before, remember that 38-3 loss in week 1 a season ago? They followed that up with a 35-17 win against a weak opponent in the Lions the following week.

"Drops are gonna happen.. it's the mental mistakes that we're gonna have to clean up" ~@AaronRodgers12#PMSLive #GoPackGo pic.twitter.com/4ef8r398t2

This offense is currently trusting two rookie receivers who are playing a lot of snaps and as they progress, this team will begin to look like the NFC North favorites. Rodgers is 22-5 SU and 20-7 ATS in his career vs the Bears, and with arguably the best running back duo in the league, look for this Packers offense to get going Sunday night.

It’s with good reason we see Green Bay as such heavy favorites in the Bears vs Packers odds.

The Chicago Bears are just what the doctor ordered for Aaron Rodgers and this Packers offense and in this spot, give me the Packers laying the points. 9.5 is definitely not a number you feel overly comfortable with when the game starts but when you dig deeper into the Lambeau numbers, I love the spot.

Bears fans should be worried…

The Packers went 7-1 ATS at home a season ago which included a perfect 3-0 ATS mark when favored by 9.5 points or more.

The Bears are a clear fade in this spot, but a guy I am not fading is David Montgomery at 42.5 rushing yards in the Bears vs Packers odds, I like the over for his rushing total.

After 17 attempts which resulted in an alarming 26 yards against the 49ers, I believe Montgomery is in a strong spot with a discounted rushing prop here. The Bears may be playing from behind, but I think Montgomery could cover this number before the game gets out of hand.