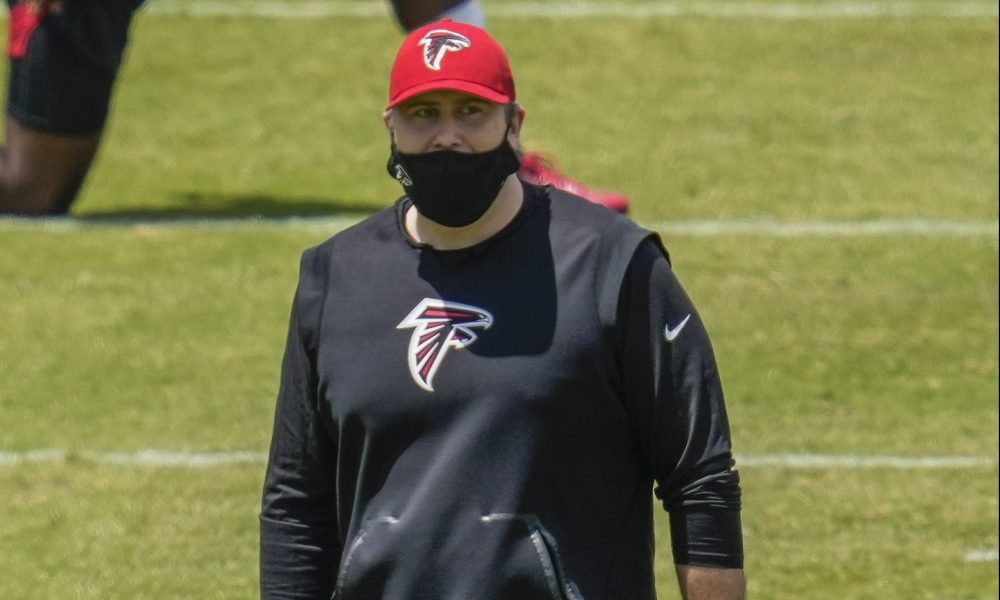 For the first time in 10 years, the Falcons will be without their number 1 receiver in Julio Jones. As one of the most dominant wide receivers in NFL history, Julio’s departure was definitely a sad sight amongst Falcons fans. This is a massive hit to the receiving corps, as it’s now expected to be the Calvin Ridley show in Atlanta. He will get some new help though.

The Falcons used the 4th overall pick in 2021 on Kyle Pitts, one of the best tight end prospects we’ve ever seen. I expect him to make an immediate impact on the team, specifically as a receiving tight end, and while he won’t fill what Julio was able to do, he could at least help absorb a decent amount of it. Losing Julio is definitely a worrying site though, just look at the Falcons splits with and without Julio playing since 2012: 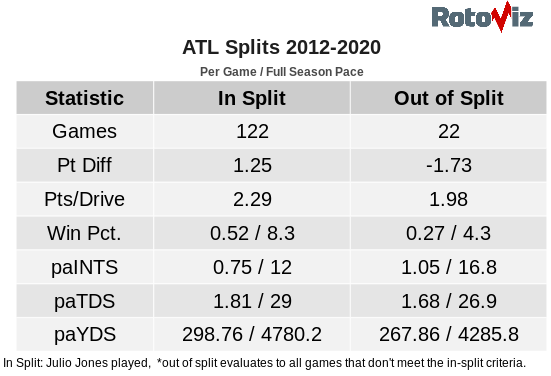 Everything is down without Jones, but the one that sticks out the most to me is win percentage. In the 22 games without Julio they’ve only had a 27% win percentage, compared to 52% with him. That’s an absurdly high gap. But who else did they add? The running back room looks completely different. Todd Gurley, Brian Hill and Ito Smith are all gone and were replaced with Mike Davis, Cordarrelle Patterson, D’Onta Foreman and Javian Hawkins. I don’t see any major upgrades there, but Mike Davis is definitely a more than capable back. Atlanta hasn’t had an efficient run game since Kyle Shanahan left, but there is a glimmer of hope. 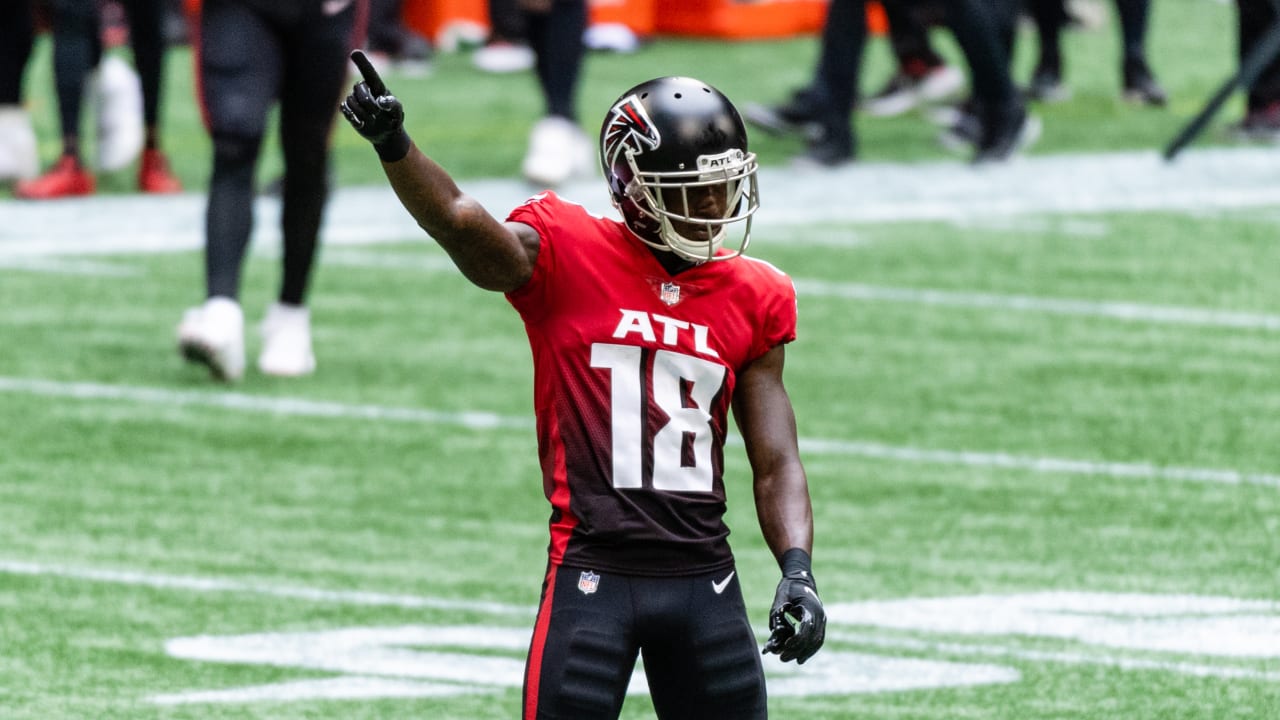 The Falcons finally moved on from their head coach Dan Quinn and brought in former Tennessee Titans offensive coordinator, Arthur Smith. The Titans were one of, if not the best play action teams last year with Smith, so I’d expect to see him drastically improve the Falcons ability to do the same. They took a few hits on the offensive line, the biggest of which being the loss of their longtime center Alex Mack, so that might If this offense wants any chance of being good, they’ve got to hope Smith is the answer. 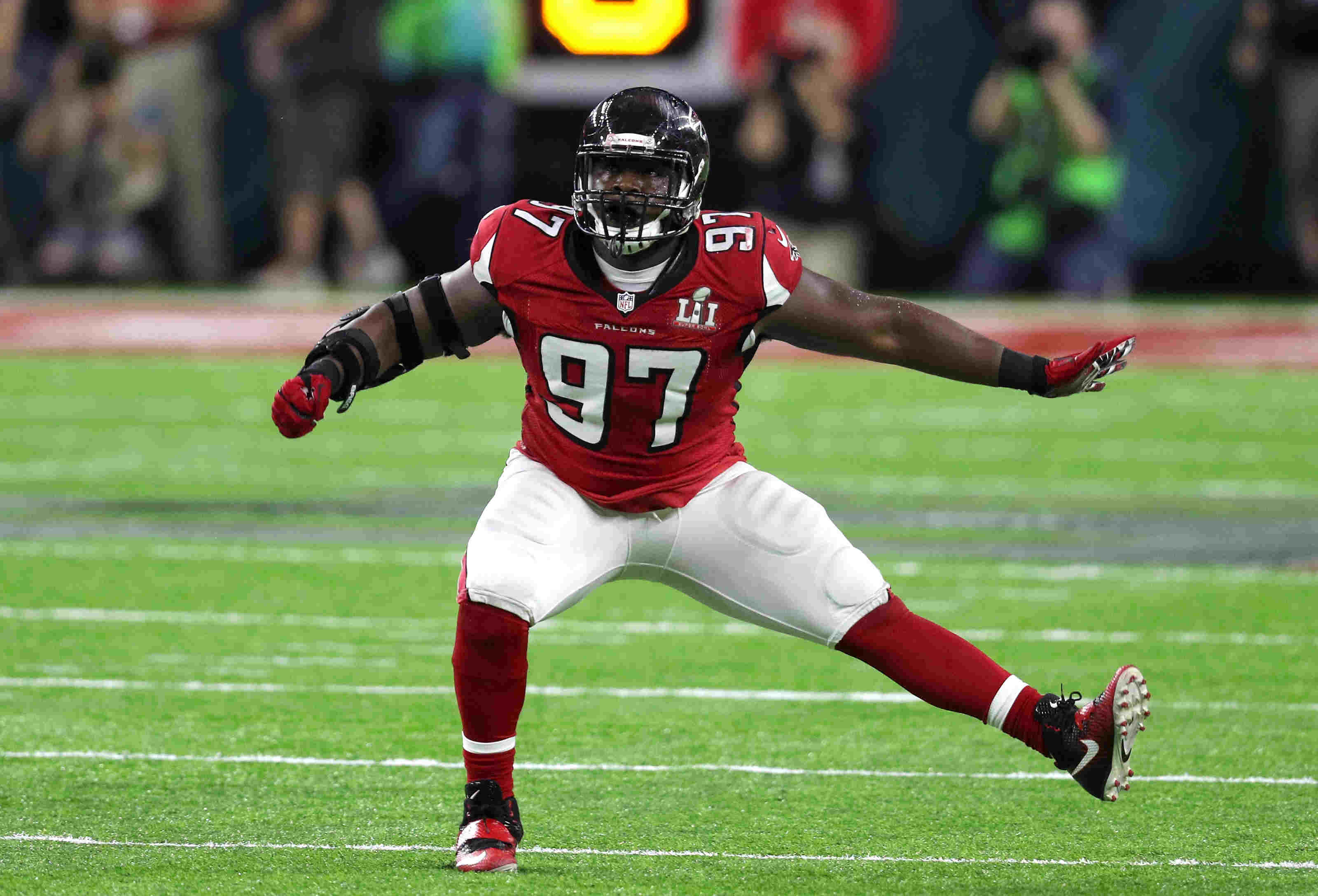 I wasn’t confident with the offense, but I’m even less confident with the defense. They gave up the 4th most yards (6374) and 4th most yards per play (6.2) last year, and it’s not like they got any better. The pass rush is nothing special, as Dante Fowler can hold his own and Grady Jarrett is pretty solid inside, but other than that it’s just meh. I don’t expect to see much improvement from the 1.8 sacks per game number last year. Deion Jones and Foyesade Oluokun are a pretty solid linebacker duo and definitely the strong point of this defense.

The secondary has always been a weak point of this defense but there’s a chance that will be any different this year. They lost a lot of their starters, as Blidi Wreh-Wilson, Damontae Kazee, Ricardo Allen and Keanu Neal all are gone. The only starters they kept from 2020 were Isaiah Oliver, who we still haven’t seen take that step up we’re waiting for and AJ Terrell. Terrell has a lot of potential and will be someone this secondary looks to lean on in his sophomore year.

They brought in a couple veterans to replace Allen and Neal in Duron Harmon and Erik Harris, not the greatest additions but they’ll play a role. The range of outcomes for this secondary is pretty large, simply because there’s so much turnover. I am worried things could turn bad very quickly though. 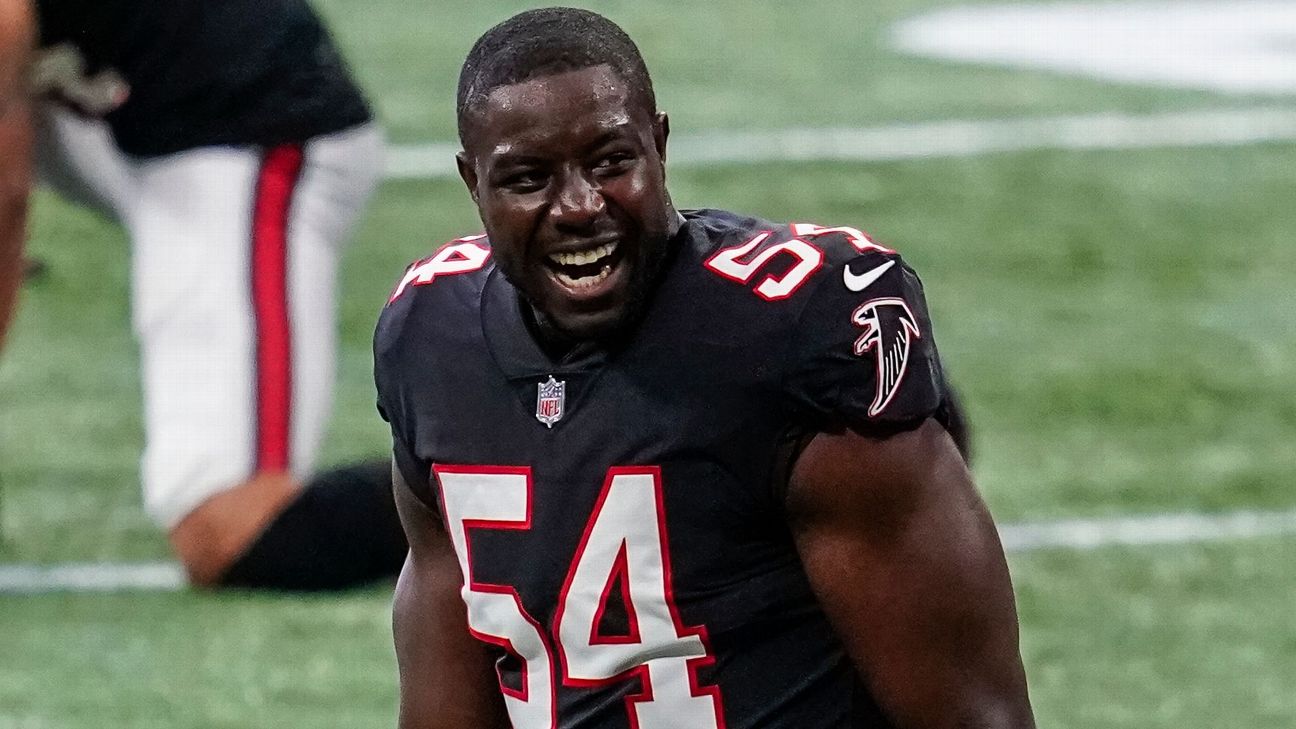 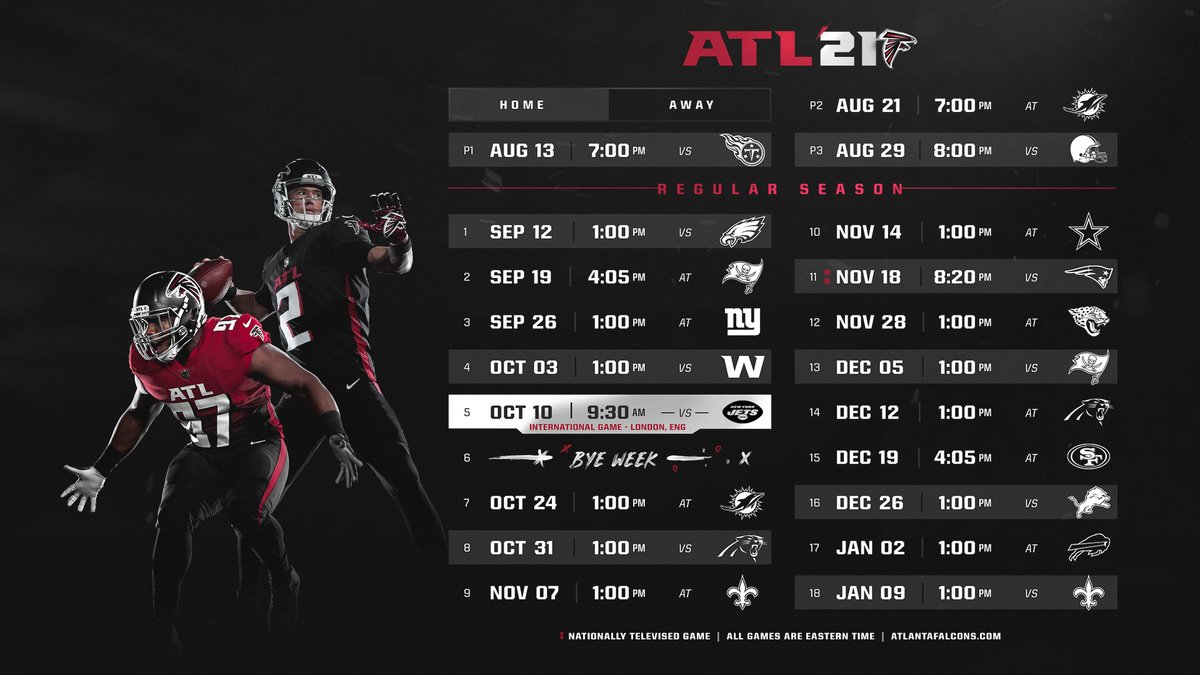 The schedule isn’t too tough, as the Falcons only play 2 playoff teams from last year outside of their division (Buffalo and Washington), but I just don’t expect this team to be very good. There’s potential for a few more wins on this schedule, but I’m confident in saying Atlanta will be under .500.

This team just needs to show they’re headed in the right direction under Arthur Smith and maybe they can build up a team around him in the coming years. Matt Ryan is getting up there in age and I’m not sure if he’s still got enough in the tank to return to his prime form. If things aren’t clicking in 2021, I could see them find his replacement in the draft next year.