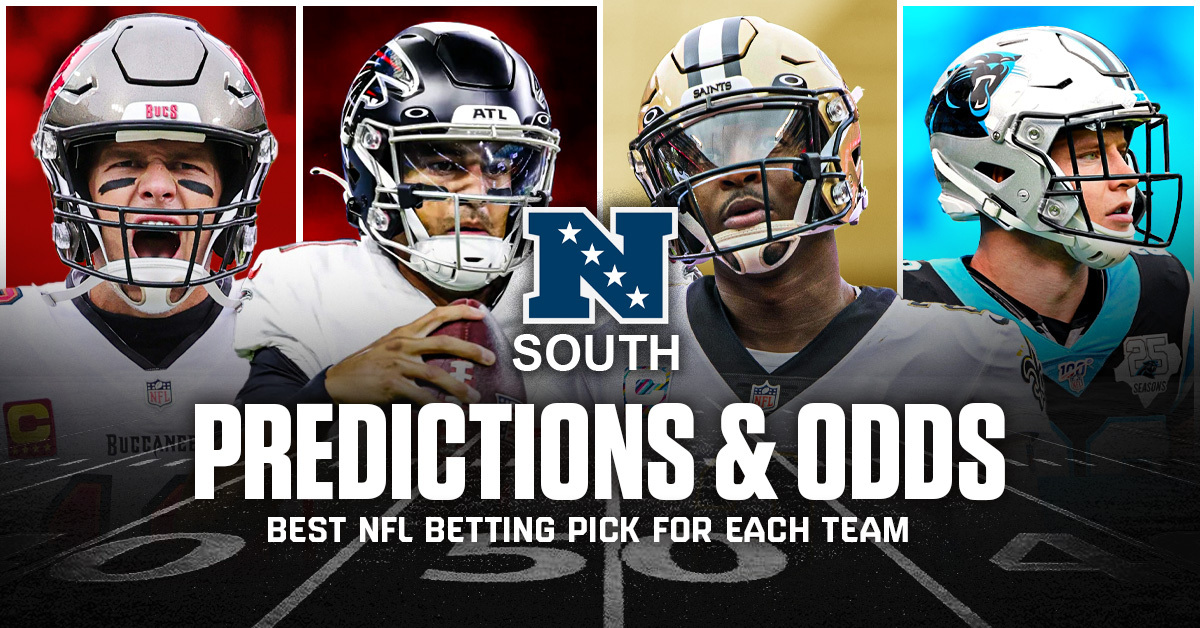 It’s no surprise that Tom Brady made his return from his short retirement stint, but what’s puzzling is why he was considering leaving the NFC South. The fellow QB’s in this division feature Marcus Mariota, Baker Mayfield (maybe?) and Jameis WInston. The focus of these NFC South division predictions may not be on who will win this division but how many of the others can make the postseason.

Let’s take a look at the NFC South division odds as we get closer to the 2022 season, as we identify where the value lies and make a betting pick for each team.

Louisiana sports betting markets have these teams fairly spread out when it comes to their win totals, this could be a look ahead into the potential end of year standings in the division. The win totals are pretty similar across the market, with BetMGM offering similar prices on these NFC South division odds.

The updated Super Bowl 57 odds list the Buccaneers right at the top, despite losing a number of members of their offensive line, including Ali Marpet’s retirement and Ryan Jensen’s preseason injury. At Caesars Sportsbook only the Buffalo Bills have shorter odds to win the Super Bowl at a price of +600.

The Buccaneers are looking to run it back yet again, one year removed from their Super Bowl victory. Tom Brady’s return immediately makes them the favorite to make it out of the NFC in 2022. The secondary is pretty well all intact, Chris Godwin has made significant strides to return from his late season ACL tear, Leonard Fournette was resigned and Russell Gage and Julio Jones were added to replace Antonio Brown.

That doesn’t mean there shouldn’t be any concerns for sports bettors when it comes to this roster. Jason Pierre-Paul didn’t have a great 2021 season but the departure of Shaquil Barrett is significant. Replacing him with a 32 year-old Akiem Hicks doesn’t make me think they can maintain their 47 sack output from 2022. I think this group could be outside the top-20 in sack rate this season.

The other concern comes on the offensive side of the ball, it looks like three of the top-5 offensive lineman when it comes to snap counts last season will not be playing this year. Ryan Jensen is a longshot to be back from his knee injury, Ali Marpet’s retirement, and Alex Cappa now in Cincinnati. This week Aaron Stinnie also lost his season to an ACL tear, he was inline to take over at guard.

Brady was pressured at the lowest rate in the NFL this season, just 20% of dropbacks, his yards per attempt was 25th and his completion percentage was 29th under pressure in 2021. If a 45 year-old Tom Brady isn’t well protected, and I think there’s legitimate concern he won’t, then this could be the worst Bucs team of the Tom Brady era.

It’s a new era in New Orleans, with Dennis Allen being promoted to head coach after Sean Payton’s departure. The Saints have finished 4th and 3rd in opponent points per game under his tutelage so I’d expect them to maintain a similar output with Allen leading the charge. Replacing the departure of Marcus Williams to Baltimore with Tyrann Mathieu should help them in maintaining that excellence.

On the offensive side, the loss of Terron Armstead certainly hurts but it was a formality he was departing and James Hurst is ready to move to the left side. With Winston back behind center it gives Alvin Kamara to do what he does best and that’s work as a pass catcher. Kamara struggled while seeing plenty of stacked fronts with an offense that was incredibly underwhelming due to it’s personnel.

It’s been a long time since the Saints have had this much talent at the wide receiver position. Michael Thomas may finally be healthy for the first time in two seasons, Jarivs Landry is one of the league’s most underappreciated pass catchers and Chris Olave is an exciting and experience college product out of Ohio State.

Considering their success against the Bucs, 4-1 the last two seasons, this team could put together a quality record within their division. I think it’s worth a shot at taking them to win the NFC South with a +340 price at Caesars Sportsbook.

If I had to predict one team to make a 2021 Cincinnati Bengals type rise it would have to be the Panthers. I like what they have on defense, I think there’s talent both up front and in the secondary. The loss of Hassan Reddick and his 15 sacks is noteworthy, but Yetur Gross-Metos had an 11.5% pass rush win rate last season and registered 4 sacks despite playing just 188 snaps. Pairing him with Brian Burns still gives them a solid duo on the edge.

The biggest concern comes on the offensive line, Carolina’s pass blocking grade was 28th and run blocking grade was 25th in the NFL according to PFF last season. The right side seems to be in a good spot with Taylor Moton and Super Bowl champion Austin Corbett. Carolina added Ikem Ekwonu and Cade Mays in this years NFL Draft, giving them depth and options on the other side.

Baker Mayfield played through significant injury last season and I think he’ll be in position to give this team improved production at the quarterback position. These may be the best pass catching options he’s had in his career in DJ Moore and Christian McCaffrey. But if this team is going to make any noise in the NFC they’re going to need to see some progression from now sophomore Terrace Marshall.

There aren’t quite enough offensive weapons for me to see this team making the playoffs and going on a run like Cincinnati last season. But the secondary has a nose for the football, Jeremy Chinn, Donte Jackson and Jaycee Horn form a nice trio in the backend. A lot will need to go right for this group but I think they can eclipse their 6.5 win total.

Yet another offseason in Atlanta where the Falcons completely overlook the most important positions on the field that aren’t quarterback. The offensive line is a complete joke and got next to no help. Last years third round pick Jalen Mayfield hasn’t been able to earn a starting role and they followed that up by not drafting on offensive lineman until round 6 this year. Only the Miami Dolphins earned a worse pass blocking grade from PFF last season.

You head over to the other side of the ball to see Ta’Quon Graham and Grady Jarrett on both defensive ends, they combined for just one sack in 2021. This team desperately needs talent when it comes to getting after the quarterback, the only real player I see capable of providing that is second round pick Arnold Ebikete. But this was the worst pass rushing team in the NFL last season.

As exciting as it is to have Kyle Pitts and Drake London to throw to the teams that win football games in this league can play in the trenches. You need to be able to get after the QB in this pass heavy league. I think this is the worst team in the NFL, they won’t be surpassing their win total in 2022.