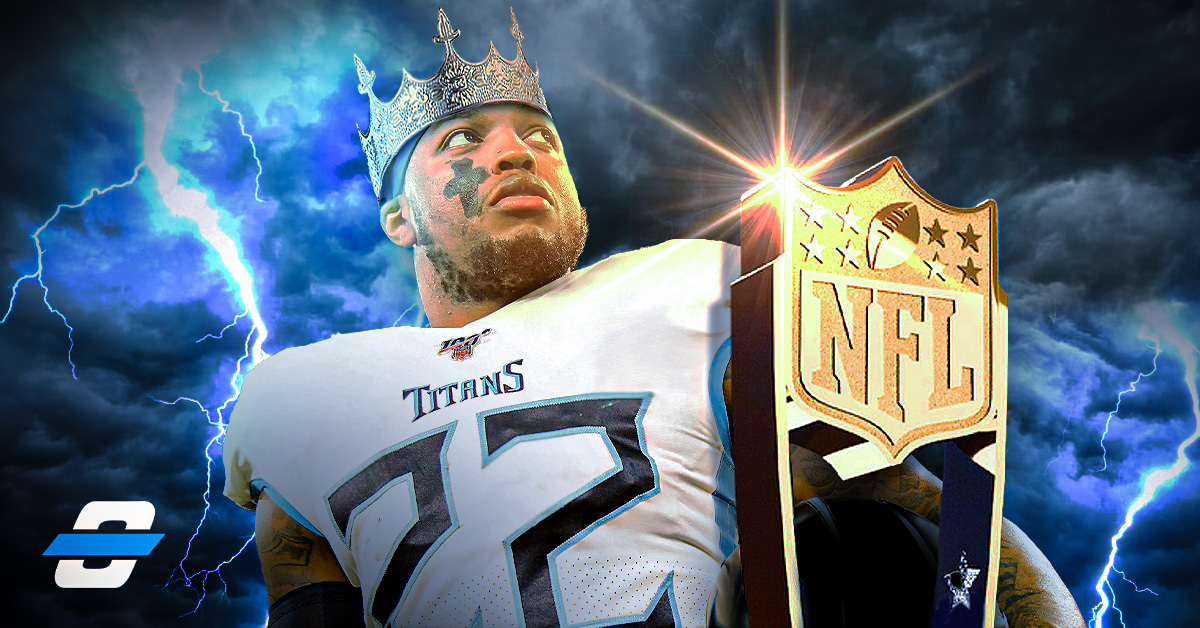 Heading into the 2022 NFL season, I think there are some great value plays you can get on season-long awards. Trying to predict who will win these awards can be very difficult and that’s why I’m here to help you. Below are some of my favorite plays for all seven 2022 NFL awards. I attempted to take someone who was not the favorite or a frontrunner for most of theses awards, so take that into consideration as well.

The last non-QB to win the MVP award was Adrian Peterson in 2011. So according to that logic, that narrows our list of candidates down to 32. There’s the obvious route of Josh Allen, who’s the favorite at BetMGM with +700 odds, but unlike our favorite QB, he’s playing without his offensive coordinator from last season.

Justin Herbert is in the midst of one of the greatest starts to a QB career in NFL history. In his first two NFL seasons, Herbert ranks 1st in completions, passing touchdowns, and passing yards in NFL history. He’s put up these record numbers under two different offensive schemes in as many seasons.

With Joe Lombardi back as offensive coordinator, the offensive line playing at an elite level, and his weapons still intact, I project 5000+ passing yards and 45+ touchdowns this upcoming season. The former Oregon Duck is on pace to be in the discussion with some of the all-time greats at quarterback. The only thing missing is an MVP trophy, which will change in 2022 when he asserts himself as a top-3 quarterback in the NFL.

Offensive player of the year is one of the most interesting awards in the NFL. A skill position player has won it the past three seasons. Cooper Kupp in 2021, Derrick Henry in 2020, and Michael Thomas in 2019. Furthermore, MVP is a quarterback award, so I’m leaving them off this list. The player that’s caught my eye this offseason is Minnesota Vikings WR, Justin Jefferson. Jefferson currently sits at eighth in the OPOY odds at +2000 on BetMGM.

Jefferson is one of the most talented receivers in the NFL, but in order for him to win this award, his elite talent has to meet elite production. That’s where Kevin O’Connell comes in, who was Cooper Kupps’ offensive coordinator last season, and the Viking’s head coach this season.

Jefferson had 164 targets, and the most air yards in the NFL in 2022 (1,996), and if O’Connell can help him become more efficient on a down-to-down basis then look out. Former Vikings head coach, Mike Zimmer was clearly holding this offense back and with a more nuanced and creative playbook, Jefferson should be able to turn immense talent into immense production in 2022.

The defensive line has dominated this award for the past ten seasons. In the last 10 years, 8 defensive linemen have taken home this award and 7 of those are edge defenders. The last player not on the Dline to win this award was Stephon Gilmore in 2019. You’ve got the square picks at the top in former winners TJ Watt and Aaron Donald, and they’re the favorites to win it yet again.

But my favorite to win it this season is Micah Parsons going into his sophomore season. As a rookie, he was 9th in sacks with 13 and 5th in tackles for loss with 21. More importantly, he was named a first-team All-Pro last season as well as ranking second in DPOY votes, behind TJ Watt. He was the first player to do this since Lawrence Taylor won the award as a rookie in 1981.

He did all this while playing just about every position on the football field. Last season he had 390 snaps on the defensive line, 540 at linebacker, 20 in the slot, 9 as a corner, and even got one snap at free safety.  The recent signing of Anthony Barr at linebacker should help him even more. Barr practically fills his role as an off-ball linebacker, and if he can do that at a high level that will allow Parsons to rush the passer more in a Lawrence Taylor-type role.  Parsons is excellent in whatever role is given to him, and I’m backing him to win defensive player of the year at +900 odds on BetMGM.

Ja’Marr Chase who claimed this award in 2021, was the first receiver to do it since Odell set the league on fire in 2014. But we’re going back-to-back in 2022 with another wide receiver winning the award this season. That receiver will be the tenth overall pick, Garrett Wilson, from The Ohio State University. Wilson is quite easily the most polished receiver in this class and he may be the most talented as well.

He’s a crafty route runner that can create effortless separation, and his frame and length allow him to have an excellent catch radius. Not to mention, his 4.38 40-yard dash that he ran at the NFL Combine, shows his ability to make big plays downfield, which is also something he did at Ohio State. His size and pedigree make him a candidate to be the immediate WR1 in New York, surpassing the 5’9 Elijah Moore.

With no rookie QB expected to start in week 1, bet on the most talented offensive player in this rookie class to bring home the award. Fans residing in New York will have the chance to place this bet on PointsBet at +1000 odds with promo codes available here.

Predicting the defensive rookie of the year is a complete shot in the dark. Since 2012 there have been five different positions that have taken home the award. A middle linebacker has taken it home once, outside linebacker, corner, and defensive tackle twice, and then defensive end three times. So why not swing for the fences with a safety, a position that hasn’t won the award since 1990? Derwin James was robbed of the award in 2018, but Baltimore Ravens safety, Kyle Hamilton will get it done for the position in 2022.

Kyle Hamilton, a 6’4”, 225 pound safety with a 42” vert, was left off the Thorpe Award watch list. Pretty ridiculous considering this crazy stat. https://t.co/7726GAkLNG

The former Notre Dame standout is a freak of nature, and that is exactly what the Ravens need after ranking last in passing defense last season. He’s a do it all, unicorn-type guy, with the ability to make tackles in the box, get into the backfield, or play deep as a ball-hawking free safety. To win defensive rookie of the year you need to fill up the stat sheet, like Micah Parsons did in 2021. With his versatility and a new DC for the Ravens in Mike Macdonald, he has the chance to impact the stat sheet in many different areas next season.

This is the easiest pick I made by far, as I feel Derrick Henry is a slam-dunk pick to win comeback player of the year in 2022. When looking back at other players that have won comeback player of the year, they all seem like stories that should have been predicted before the season even started. Examples of this include Joe Burrow in 2021 and Alex Smith’s heroic return in 2020. Sticking to that path, I am taking the easy pick and the guy everyone is thinking of to win the award this season in King Henry.

Before Henry suffered a lisfranc fracture halfway through last season, he was on pace for an absurd 450+ rush attempts and 20+ touchdowns. Furthermore, in his last healthy season in 2021, he put up a ridiculous 2,027 rushing yards and 17 touchdowns. He is also a guy who has averaged over 100 rush yards a game all of the past three seasons.

With AJ Brown being shipped out to Philadelphia, and first-round pick Treylon Burks reportedly out of shape in Titans training camp, DHenny season is full-go. Let’s not be idiots and put $100 on Henry to win CPOY and he’ll turn that into $450 without issue. Tennessee sports betting is legal, so Titans fans can get in on the action for the Comeback Player of the Year award.

Coach of the year may seem like an unpredictable award, but past results help show us some of the guidelines you must meet. Firstly, you need to make the playoffs, every winner of this award since Jimmy Johnson in 1990 has made the playoffs. Secondly, seven out of the last ten coaches to win this award, their team has gone from out of the playoffs the previous season to making the playoffs the next. So we are looking for a coach, and a team, that fits both of those criteria for 2022.

That is Minnesota Vikings head coach, Kevin O’Connell. The Vikings have all the pieces to make a playoff push in 2022. With Justin Jefferson, Dalvin Cook, and Kirk Cousins forming a dynamic trio on offense. The Viking’s defense is being heavily overlooked in 2022, as their front seven includes former Pro Bowlers in Danielle Hunter, Eric Kendricks, and Za’Darius Smith. They also have loads of talent in the secondary with former All-Pros Harrison Smith and Patrick Peterson. They also drafted safety Lewis Cine in the first round and cornerback Andrew Booth Jr in the second.

O’Connell is in his first year as the Vikings head coach and is coming off a season as the Rams offensive coordinator in which he engineered an offense that propelled the Rams to a super bowl win. He was also the driving force behind Cooper Kupp winning the NFL offensive player of the year and Super Bowl MVP. He’s near the top of the coach of the year odds board at BetMGM, listed at +1400, but that doesn’t deter me as this Vikings team could potentially win the NFC North in 2022.