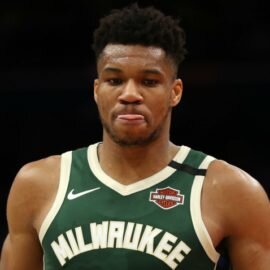 The Milwaukee Bucks got their asses handed to them last night. We all thought they conquered their demons this playoffs but after what I saw in game 1 I think we were wrong. There was no reason to “fear the deer” in this one.

First off, can somebody educate me as to why Brook Lopez only played 22 minutes? It seemed like he was the only guy making any shots in this game through the first half plus, then we just never saw him again. 17 points, 50% from the field, 3/5 from deep. I don’t get it.

Let’s talk about that mental midget Giannis, 7/12 from the free throw line, same old, same old. Somehow the stat sheet is telling me he only had 3 turnovers, it felt like a billion betwen him and Middleton. Kudos to Antetokounmpo for suiting up in this one, really didn’t expect to see that. But as I’ve said before, this man cannot be relied on in crunch time. I don’t want him to have the ball in his hands with the game on the line, plain and simple.

Look at Chris Paul alpha the shit out of him on this play, as he did all night long…

Chris Paul is a stone cold fucking killer, this man deserves his chip. It’s hard to put into words how much I enjoy watching him play. I feel like I could be standing on an 8 foot ladder 3 feet from the hoop and Paul would still drop that lethal elbow jumper on me. 34 points tonight, can’t wait to watch this man cook all series.

Chris Paul got the clean pick on Middleton 🍪@NBA | @CP3pic.twitter.com/fUzcdA0NvS

One last thing on game 1, I don’t want to let Khris Middleton off the hook. I know what I’ve said about him, the playoffs have been his coming out party, but he made basketball look way too hard tonight. His 29 points disguise his actual play on the floor. First off, 5 turnovers and just a lack of care for the basketball. In the first half he was taking so many low percentage shots, in the second half he was just lucky enough for some of those low percentage shots to fall.

Middleton, Jrue Holiday (4/14 and 0/4 from three) and Antetokounmpo are going to need to lose that beta energy for game 2.