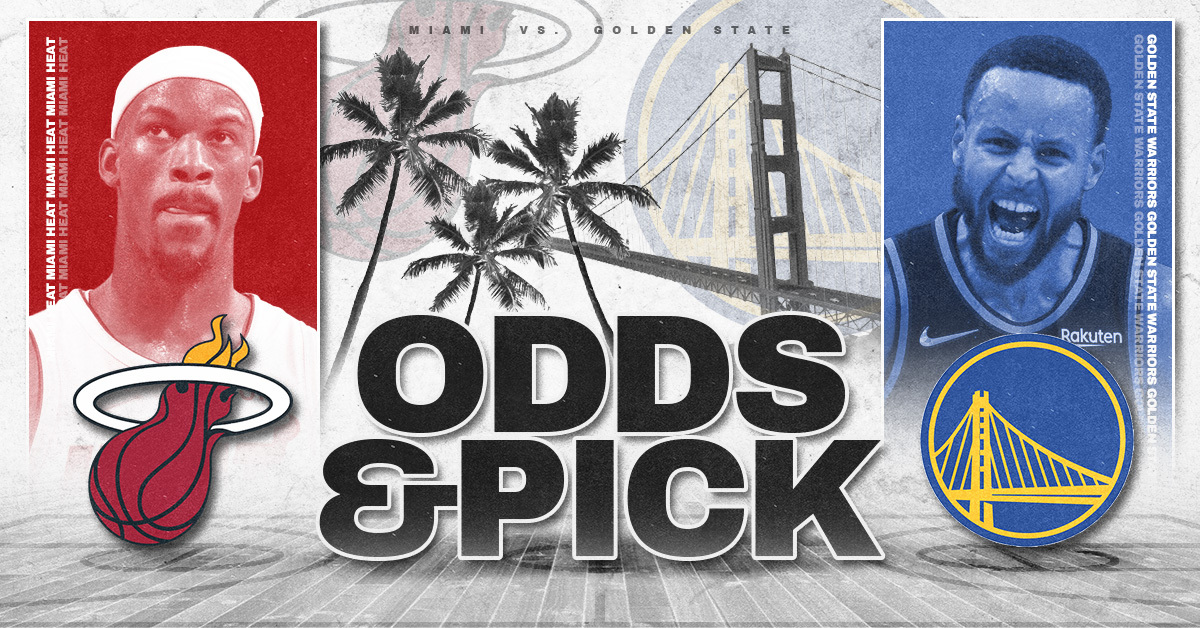 The Miami Heat make their trip out west to take on the 2022 reigning champs, the Golden State Warriors at 10 PM EST in the Chase Center. The Heat are coming off a back-to-back after going up against the fast-paced Portland Trailblazers on Wednesday, so hopefully, Jimmy Butler’s serving up some of his coffee, because the boys will be certifiably running on E. DraftKings is giving Miami 7.5-points in the Heat vs Warriors odds with the total set at 224.

Both teams are relatively healthy with Oladipo not taking the floor for the Heat + DiVincenzo & Iggy not suiting up on the Warriors side.

If you watched the Suns play the Warriors on Tuesday night and you aren’t violently bricked up to watch another marquee NBA matchup between two juggernauts in their respective conferences, then I need you to call your ex and just tell them that they were right.

Sign-up at DraftKings and a $1,000 deposit match bonus for Heat vs warriors, and more daily NBA bonuses everyday.

Sports betting markets put the spread at 7.5 in the Heat vs Warriors odds. DraftKings Sportsbook offers a number of NBA markets, including player props for all games this Thursday.

The Miami Heat are walking into this game with some surprising losses on their record so far this season. On top of not notching many W’s in their record, they have been wildly unserious about covering the spread for the kids — going 0-4 through their first four games.

Now, they’ve only gone up against teams who made the playoffs last year, but this team had the best record in the East last year and with Coach Spoelstra still at the helm, regression should not be expected.

Tyler Herro as a starter this season:

Leading the Heat in rebounds and threes. pic.twitter.com/ISNqWNgIYP

Regardless, seasons are not built in the first two weeks of the season and this team has a lot to like. Tyler Herro is looking like an early MIP candidate with the way he is attacking the boards.

Through four games he’s grabbed 6, 6, 8, and 15 rebounds after averaging only 4.7 through his career. I’ll be curious to see what they set his rebounds prop at in the Heat vs Warriors odds, because he’ll be going up against another Rebounding Revelation in Andrew Wiggins, who made his board-grabbing-game known especially well through the Warriors playoff run last year.

For the Golden State Warriors, it’s business per usual. This is a team that’s really relied on a second unit full of wily veterans who are more than willing to buy in.

However, this year’s Warriors have a bit of a different look with young guys like Kuminga, Moody, Wiseman, and even Ty Jerome getting a lot of run.

Tough one tonight in Phoenix. pic.twitter.com/N9EjzwRQVf

We’ve seen the Warriors go 1-3 ATS so far, but likely due to a bit of weaker defense, they have yet to hit an under — going 4-0 to the over.

After a wacky game in the desert against the Suns, where we saw Klay Thompson get kicked out of the game for the first time in 651 games played, I fully expect this team to bounce back with better discipline and be fully dialed in, which is indeed why we see them as favorites in Heat vs Warriors odds.

So although the Miami Heat have built a reputation as being one of the best defensive teams in the league, it will be tough to run the floor against Portland and Golden State in back-to-back nights.

They have enough of an ability to score and could keep up with the Warriors, but I like the Warriors to run away with this one. Give me the home team and -7.5 in the Heat vs Warriors odds, sprinkled with a Tyler Herro fade.

I’ll be keeping my eye on line movement for the total via VSiN.com and Covers — two website that I highly recommend you leverage as well to see where the handle vs the public are laying their money.