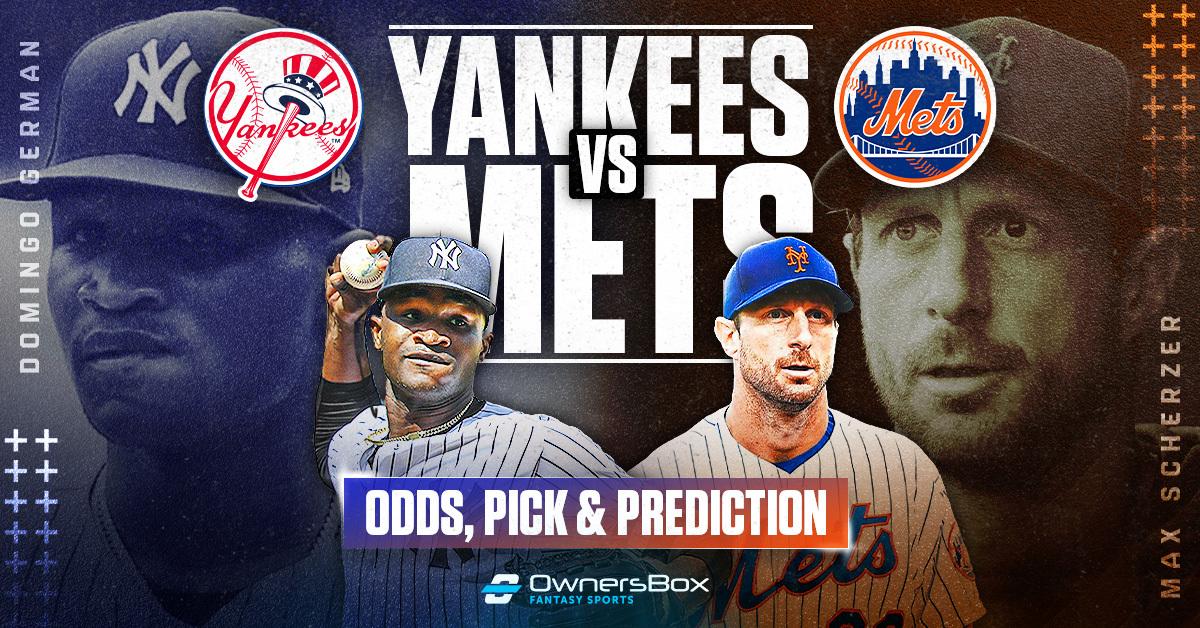 The Mets and Yankees are back for their second and final meeting of the regular season on Wednesday. The Mets took the opener by a score of 6-3, running Jordan Montgomery out of the game before he could get through 3 innings of work. Meanwhile Taijuan Walker was able weather 7 hits into just 3 earned runs across 6 innings pitched. The Yankees vs Mets odds have lengthened with a lopsided pitching matchup at Citi Field.

Max Scherzer toes the rubber for the Mets, he’s making his 5th start since returning from injury earlier this month. He’s in late October type form, allowing just 5 runs in 25.1 innings pitched. Despite that, he has a 1-1 record as his team has only provided him with 2.25 runs per game in those starts.

Domingo German goes for the Bronx Bombers, this will be just his second start of the season. He certainly hasn’t been eased in as his first go at it was against Houston. He gave up 5 earned runs and 2 home runs in just 3 innings. Taking on this Mets squad isn’t making things any easier on him.

Odds are courtesy of Caesars Sportsbook!

With Scherzer on the bump the Mets are lengthy favorites at pretty well every New York sports betting site. If you’re looking to back the Mets on the moneyline you best be doing some line shopping. The best price available in the Mets vs Yankees odds is -180 at DraftKings Sportsbook for the Mets to complete the sweep.

As touched on earlier, the Mets can’t seem to get their ace much support lately, in Scherzer’s last 4 starts the average total runs are a mere 4.5 per game. If you use the Caesars Sportsbook promo code ‘OWNERSBOX15’ you can place a risk-free wager up to $1,500 on the alternate run total at 5.5. A $1,500 wager would pay $4,200 on this bet.

The Mets find themselves in an excellent position to come away with a sweep of the best team in baseball. They’ve been great against right handed pitchers this season, with the leagues 3rd highest batting average, 6th highest wRC+ and a strikeout rate below 20%. With this being a interleague matchup, they haven’t seen much of German though, Mark Canha has the most AB’s with 9.

Almost 50% of German’s pitch mix is his curveball and sinker, which can be a deadly duo against opponents that lack discipline at the plate. The Mets are in the middle of the pack in chase rate, but they do have the third highest chase contact rate at 60.4%. They also have the 3rd lowest whiff rate in Major League Baseball to go with it.

Aside from Francisco Lindor, the rest of the Mets lineup has provided positive run value against sinkers this season. Jeff McNeil is hitting .417 against them this season. Against the curveball, which German through roughly 27% of the time last season, the success been a bit more mediocre. Pete Alonso sticks out with a .310 AVG but a 43.1% whiff rate.

The Yankees are in tough to avoid a 2-game sweep at the hand of their in city rival. Yankees hitters have seen Scherzer in the past, but the results are below average. DJ LeMahieu is 4/9 in his career but Aaron Hicks is without a hit in 13 at bats vs Max. This isn’t just any right handed pitcher they’ve faced this season.

Against right handed pitchers, the Yankees rank 3rd in OPS, 2nd in ISO and 2nd in wRC+. They can change the game in one swing of the bat. But Scherzer has enjoyed his lowest HR/9 since his 2014 season in Detroit, allowing just 0.84 HR/9.

The matchup between Scherzer and Judge will be must watch television on Wednesday night. The Mets right hander loves his fastball, he’s throwing it on 45.5% of pitches in 2022. But Judge has been the best hitter in baseball against that pitch this season, with a .895 SLG and a run value from Baseball Savant of 17.

Taking a side in this game has little value. Scherzer taking the hill has the Mets odds juiced up and backing the Yankees seems risky with the unpredictability of Domingo German’s second start of the season. So instead we will look to some of the prop betting markets available.

We’ll start with a pick priced at +140 in the Yankees vs Mets odds at BetMGM, that’s Jeff McNeil over 1.5 bases. We detailed his success against off-speed earlier on but he’s also hitting .298 against right handed pitchers this season and in his career it’s .302. With Geman going tonight he should move up a few spots in the lineup as well.

The last bet is on the other side of the diamond with Aaron Judge, I’m looking at his over 0.5 run at -115 at BetMGM as well. I don’t see this being a great matchup for Scherzer. A mistake with the fastball could lead to a long ball and if he gets to his other pitch mix then a free pass or two are on the table. I see Judge as a table setter today.