When Sports Teams Try to Lose

Every once in a while, we witness professional athletes intentionally do the opposite of what they’re supposed to do. Whether that’s scoring on themselves, preventing their opponent from scoring, or just flat out intentionally losing the game. My good friend, Simon Widdifield recently found some of these moments in sports and broke them down for you and I. He found these moments in history and presented them to me, capturing my live reaction to them for the first time.

To kick off these clips, we went all the way back to 2020, when Todd Gurley infamously accidently scored a touchdown against the Lions. With a little over 1 minute to play, Gurley gave his team a 5 point lead which quickly vanished as Matt Stafford lead the Lions back down the field with just enough time to score a touchdown. It’s safe to say, if Gurley had done what many other before him had managed to accomplish, (go down on the 1 yard line) the Falcons would’ve won the game. Here was our reaction to the clip:

Simon: So naturally the first clip is the one that spawned this idea in my head, Todd Gurley this past year against the Lions. This was during that stretch where the Falcons kept inventing new ways of losing every week.

Jared: This is him trying to lose but he still won, winning in this case is getting a touchdown. Of course the Falcons are the team that scores a touchdown when they’re not supposed to.

Simon: My favourite part of the clip is Lions Linebacker Jaime Collins signalling for a touchdown overtop of Gurley’s body lying on the goal line.

Jared: Gotta love when the defensive teams are happy he scores.

Simon: That’s the exact emotion I’m trying to capture with each of these incidents.

Simon: Matt Patricia was quoted as saying after the game “Great situational defense … I thought it was perfect”.

Jared: Of course Matt Patricia would praise his defense in that situation.

Jared: There’s a conspiracy theory that, Gurley, although it was better to not score, intentionally scored to pad his stats.

Simon: Did he really need that one extra touchdown?

Jared: He finished with 9. I believe he had a bonus clause if he scored a certain amount of touchdowns on the year too.

Simon: Well everyone knows 8 is not nearly as impressive as 9.

Jared: On 3.48 yards per carry, he desperately needed that extra TD.

Simon: Yikes, that is abysmal.

Maurice Jones-Drew Takes a Knee at the 1

This clips video quality is so bad it makes it look like its from the 1800’s, but bear with me. In this game, we see the Jets leading the Jaguars with just under 2 minutes to play. Rex Ryan, the Jets head coach at the time instructed his defense to let the Jags score, as it would’ve given them the ball back and a chance to win the game with a touchdown. Obviously Maurice Jones-Drew was having none of that.

With a chance to take the lead with a touchdown, MJD did the opposite of what he’s usually supposed to do, and in the end it worked out for his team as they were able to kick the game winning field goal shortly after. Here’s our live reaction to the clip:

Simon: This was a clinical play from Maurice Jones-Drew, you can see that the practice paid off

Jared: Imagine having a free path to score a touchdown and you just take a knee, it goes against every instinct in your body

Simon: After the game he told reporters that he took a ‘deep breath’ before dropping. He had to conjure all his willpower to not break the plane

Jared: I’m guessing the Jets had no timeouts left

Simon: Well in fact they used their last one the play earlier when two Jets players tackled Jones-Drew after receiving instructions to let him through. Rex Ryan post-game said “We couldn’t even get that right”.

Simon: I guess it really is about ‘who wants it more’.

Simon: Let me ask you a question. Rex Ryan was comfortable allowing a touchdown from 14 yards. If you’re the coach, when do you tell your team to part the Red Sea?

Jared: Oh god, probably around the 20 because the field goal becomes pretty automatic when it’s kicked from under 40.

Simon: I’d love to see a team that’s really confident in their offense and has horrible defense do it from like the 50.

Jared: Maybe it has happened but the was so bad it still looked like they were trying.

Worst Strikeout of All Time

This was a wild at bat. To swing at that 3rd pitch is absolutely hilarious and fully embodies the ‘trying to lose’ mantra we’re going for. Alfredo Griffin, (the man at the plate) doesn’t care that he’s doing the complete opposite of what a baseball player is supposed to do, he doesn’t care that he’s going to take an L for his plate appearance. Simon explains why here:

Simon: While Football might not be my favourite sport, it definitely provides the best anti-sports moments. Every other sport is pretty straight forward in terms of it not making sense to give the other team a helping hand. However, I was able to find this clip from the MLB.

Jared: Man that 3rd pitch was wild, how could this have possibly been a smart play for the pitcher?

Simon: This was game 157 of the Blue Jays 1992 season and the last start for Jack Morris. It’s the top of the fifth and the Jays are up 9-0 which means when the inning is over, Jack Morris will become the first 20 win pitcher in Blue Jays history, baring an insane comeback. However, it looked like a rain delay may have been on its way, so to insure the game officially counted the Jays decided to get through the fifth inning as quickly as possible.

Jared: Wow what a team player.

Jared: From the pitcher’s perspective was he like ‘this guys going to swing at anything might as well throw the worst pitch ever’.

Simon: I think it’s hilarious that Griffin fouled off the second pitch and almost jeopardized the scheme. That first swing should’ve sent a clear message to the pitcher that the Blue Jays Shortstop was swinging on anything, so why did he throw the second pitch down the middle?

Intentionally Scoring on Yourself to see a Wolf 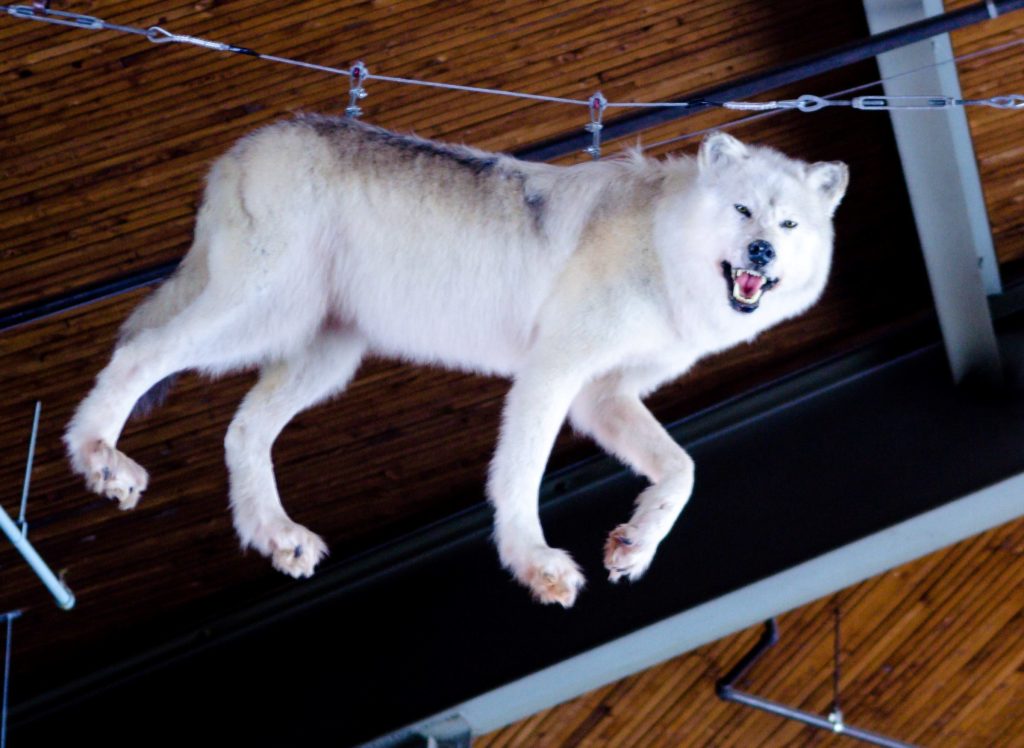 There’s no video for this moment, as it happened in the 1950s, but the reasoning behind it is interesting to say the least. Simon does a great job explaining this scenario so I’ll let him break it down:

Simon: Since I write for SudburySports.com I had to try and fit in a local one. Through sheer happenstance this is also, I believe, the only way it could occur in hockey. Are you familiar with the Doug Harvey story?

Jared: I do not know it, but I’m very excited because it’s Sudbury

Simon: I should preface that this story is unverified but widely circulated. So in the 1950’s, the NHL’s Montreal Canadiens came to town for an exhibition game against the much less skilled Sudbury Wolves. One of the unique features of the Sudbury Community Arena was a taxidermized wolf that would pop out of a trap door after every (Sudbury) goal. The Habs quickly got out to a 5-0 lead, however the Wolves got one back which meant that Hall of Famer and NHL Legend Doug Harvey got to see the wolf for the first time. He loved seeing that wolf so much, that the very next play, he took the puck off the faceoff and put it into his own net.

Jared: So he wanted to see the animal that badly he was willing to jeopardize his teams victory.

Simon:  Yeah, when he skated back to his bench he told his coach, Toe Blake, “it was worth it to see that wolf again’.

Simon: I’m pretty certain that the same wolf is still used today, except it’s on a zipline now.

Jared: Nothing quite like a 70 year old wolf to help celebrate a goal.

Winning the Game by Scoring a Basket on Yourself

This last story is another very old one, finishing off the 4 major North American sports with a moment in basketball history:

Simon: Much like with the hockey story, this might be the only circumstance where it could happen in Basketball. We’re talking about the pinnacle of the sport; 1960’s Eurocup, Basically the hoops equivalent of the Champions League. Each matchup is two legs, a home game for each team, most total points wins. That’s a very important part of the story.

Simon: In the 1962 Eurocup round of 16 the Italian side, Ignis Varese, faced off against the Spanish Real Madrid. The first leg is in Varese and they’re down by 5 with 27 seconds left. The Hungarian star foIgnis Varese, Lajos Toth, pulls threw and scores 5 points in a row to tie the game 80-80 with 2 seconds to spare.

Simon: Real’s coach Pedro Ferrandiz calls a timeout, he’s realized what no one else will for another 3 seconds which might as well be a lifetime here. See Madrid was up 78-68 1 minute and 58 seconds ago, 4 of their players had fouled out and one of their stars Wayne Hightower couldn’t play due to injury.

Simon: Yeah, before the huddle broke Ferrandiz gave his team two instructions. Varese players are down at their end guarding the basket and all cameras in the arena are facing that way as well, no one is prepared for step 1 of Ferrandiz’ plan, which goes off without a hitch. The ball is inbounded and goes immediately via a Real player into their own hoop. Clock hits zero, Ignis Varese wins 82-80.

Simon: Real’s players execute step two perfectly which is to run to the locker room. What will be dubbed the ‘Autobasket’ was just created.

Jared: So the coach believed it was better to lose by two then go to overtime and potentially get demolished and give them an uphill battle in the second leg. So did the Autobasket pay off?

Simon: Yep, Real, with their roster at full strength, won 83-62 at home in the 2nd leg of the aggregate.

Jared: So they were up 10 with two minutes to go, if the Italian team could score 10 in two then they could definitely score 25 in five.

Simon: Yeah it’s not outrageous to assume Ignis could’ve put up enough points to win on aggregate in OT. Madrid won their next two games before losing in the finals, but it was still a genius strategy. Unfortunately, for everyone everywhere FIBA banned the ‘Autobasket’ the day after the game.

These moments are pretty rare in sports, with the exception of similar versions of the Maurice Jones-Drew play in football, which happens quite regularly. They’re the kind of plays you’d love to watch play out live, as the thousands of people in the stands scratch their heads in confusion after witnessing these moments.

If you like this article, be sure to check out more of our fantasy football content! Also, we are launching our new Weekly Tournament game for NFL this season so be sure to look out for that. We will be doing free-rolls and large prize pools all season!