Tigers vs Guardians Odds, Pick and Prediction – Hutchison vs Plesac 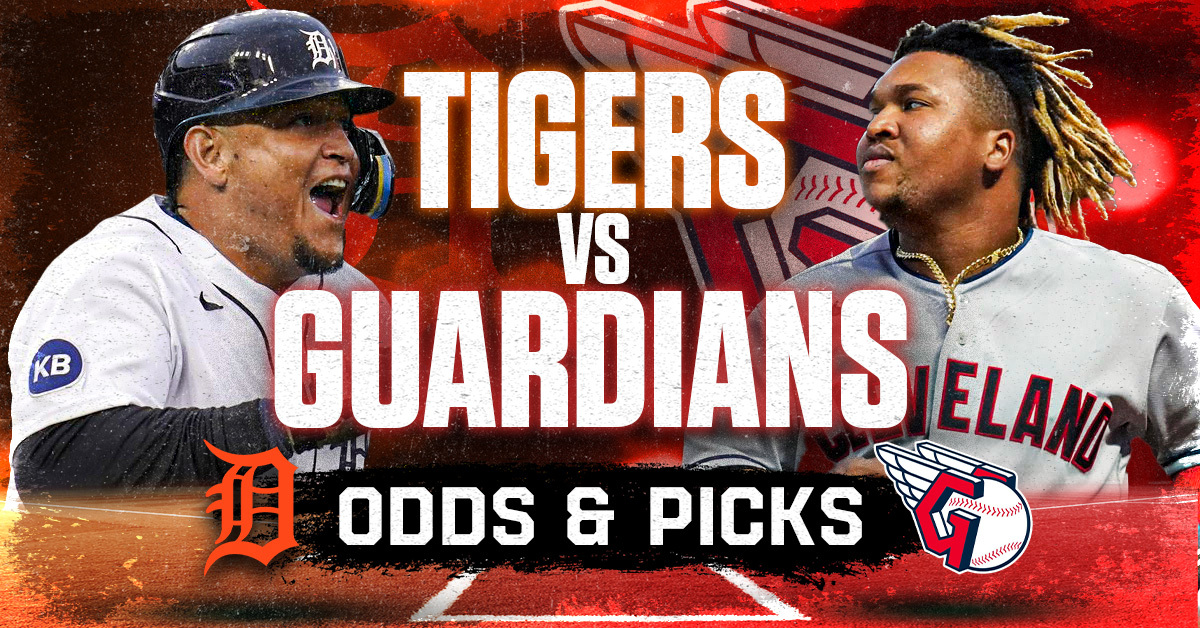 Another action packed weekend of Major League Baseball starts on Friday. The Tigers and Guardians will play game 2 of their 4 game set, with the Guardians taking the opener in shutout fashion, 4-0. Triston McKenzie went 8 innings, leaving the Cleveland bullpen rested and ready at Progressive Field. The Tigers vs Guardians odds signal that the Guardians are well positioned to pick up another win.

Zach Plesac is on the bump for Cleveland, he’s lost his last two starts, due to a complete lack of run support as his offense totaled just two runs. Those two losses include a loss to the TIgers last week, where he gave up two runs over 6 innings. Drew Hutchison toes the rubber for Detroit, he’s been used in a spot start role over the last month. He’s given up just 8 runs across 19 2/3 innings in his four starts..

Michigan sports betting markets have the Tigers listed as pretty significant underdogs in this game.  With Detroit being one of the worst teams in baseball that comes as no surprise, as road underdogs they’re 13-29 this season. Those of you backing the Guardians could look to back Plesac to record a win at +117 odds using the Caesars Sportsbook Michigan app.

Although Ohio online sports betting hasn’t been legalized yet, Guardians fans will have something to look forward to next season. Ohio is expected to launch legalized sports betting on January, 1, 2023. Ohio sports betting apps are already rolling in, with the Bengals and Betfred announcing a partnership prior to the 2022 NFL season.

The Tigers haven’t won a season series against the Guardians since 2015, so far this season that’s in line to change as they have a 7-3 record. Not only have they seen Cleveland a fair bit but they’re also very familiar with Zach Plesac. Miguel Cabrera, Jeimer Candelario, Jonathan Schoop and Willi Castro have all had 10+ at bats against the right hander. But Castro is the only one sporting a batting average above .200.

His inability to strike opponents out is good news for Detroit as they have the 6th highest strikeout rate against right handed pitchers. In Plesac’s start against them last week he managed just 3 strikeouts over 6 innings. After shopping around at a few Michigan sportsbooks I was able to find the best odds on Plesac’s strikeouts to go under 4.5, they are at BetRivers priced at -115.

The Guardians have quietly been one of the best teams in baseball against right handed pitchers this season. They have the league’s lowest strikeout rate, a .257 BA, they’re 9th in OPS and 10th in wRC+. A lot of that comes down to some of the teams biggest bats having excellent splits against righties, namely Josh Naylor, Jose Ramirez, Amed Rosario and Steven Kwan.

José Ramírez will be participating in his first Home Run Derby next week in Los Angeles. 🐐#ForTheLand pic.twitter.com/aip27iJxCd

What Hutchison can hold out on is how softly the Guardians hit the baseball. Cleveland has the lowest barrel% and hard hit rate in Major League Baseball this season, resulting in one of the league’s lowest average exit velocities. Hutchison has managed to keep the ball in the yard much better compared to the early parts of his career, his HR/9 is 0.76. So if you’re expecting runs in this one it’s going to take a number of hits.

The first pick for this game was teased earlier, Zach Plesac’s strikeout total in the Tigers vs Guardians odds is too high. With such a low strikeout rate this season combined with the fact a number of these hitters are familiar with his stuff I like him to go under 4.5 K’s today.

I’m also going to be taking over 0.5 run in the first inning. The YRFI is priced at -105 at a number of online sports betting sites today. The top of the Guardians order has been very good against right handed pitchers this season. Zach Plesac has authored an ERA of 5.63 in the first inning this season, allowing 10 runs in 16 appearances.