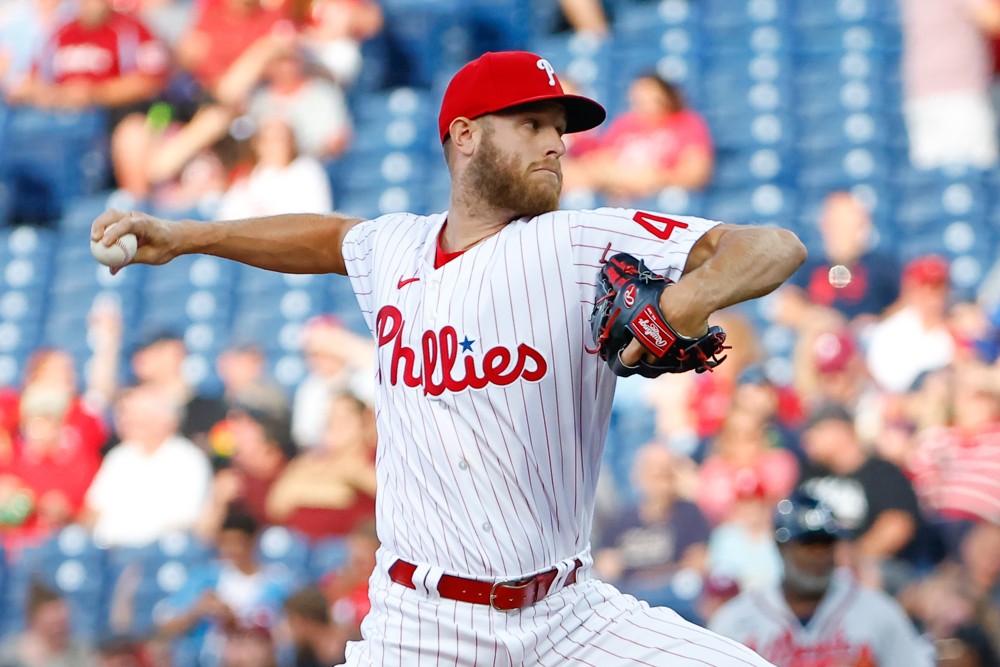 After a record setting afternoon at Citizens Bank Park, the Cardinals and Phillies meet up again under the bright lights of Sunday Night Baseball. Nolan Arenado broke a 6-6 tie on Saturday, hitting his second home-run of the game in the 9th inning. The record breaking came in the top of the 1st inning though, when St. Louis went back-to-back-to-back-to-back. It was the first time a team hit 4 consecutive home-runs in the 1st inning. We look ahead now to the Cardinals vs Phillies odds for Sunday as they close the series at 7:08pm EST.

The pitching matchup is an excellent one as Adam Wainwright goes for St. Louis and Zack Wheeler goes for Philadelphia. Citizens Bank Park is not a pitcher friendly ball park but it’s been friendly to Wheeler, who’s authored a 1.85 ERA in 48.2 innings. Wainwright is coming off one of his best starts of the season, going 7 scoreless innings and striking out 9 vs Miami.

Arenado has been carrying this Cardinals offense throughout this series, he’s responsible for six of the teams ten runs. Going 6/8 with five extra base hits with three of those being home runs. In the Cardinals vs Phillies odds at Caesars Sportsbook Nolan Arenado is listed at -188 to record at least one hit tonight. He’s 2/8 against Zack Wheeler in his career.

Illinois sports betting markets aren’t completely in agreement on how to price this game. If you sign-up with the BetRivers promo code in any legal gambling state they’re available, you’ll see the Phillies priced at an improved -148 odds. Bettors that like either team in this matchup should be sure they are shopping for the best line.

The Phillies find themselves as pretty significant favorites despite a mediocre 21-20 record at home this season. A lot of that comes down to the quality of pitching from Wheeler, who pairs a 28.5% K-rate with an opponent xSLG of .360 which are both top-18% of MLB. Despite the home-run barrage from the Cardinals on Saturday, they haven’t been hitting the ball hard this season and rely on a top-5 batting average in the league.

Wheeler’s strikeout prop is listed at 6.5 in the Phillies vs Cardinals odds at Caesars Sportsbook. He’s gone over this number in 10 of his last 11 games. That is an eye popping stat to look at for the casual bettor, but let’s dive a little deeper as to why it’s priced where it is. The Cardinals have one of the league’s lowest strikeout rates vs RHP at just 20.4% as well as 9th in whiff% this season.

The Phillies bats are quite the opposite of St. Louis, they have one of the highest hard hit rate’s in league along with their 101 home-runs this season ranking 6th. This makes for an interesting matchup against the soft throwing Wainwright, who’s been excellent this season at limiting hard contact but doesn’t miss many bats.

Despite an excellent year so far in Wainwright’s age-40 season, the expected stats do point to some regression. His expected ERA is more than a full run higher then his actual. Now this is typical from him, we’ve seen this in previous successful seasons. But what concerns me is his xBA of .274, which is the highest since two of his worst seasons in MLB back in 2015 and 2016.

Even without Bryce Harper in the lineup the Phillies still have plenty of bats to drive in runs. Despite a small sample size, there a few players that have enjoyed facing Wainwright in their career. Rhys Hoskins is 4/7 with 2 HRs and JT Realmuto is 7/16 in his career as well. The team has .252 AVG this season at home vs right handed pitchers.

We’re adding two prop bets to the card today in Major League Baseball. After shopping around, I was able to find the best line on Zack Wheeler under 6.5 strikeouts at PointsBet Ontario, the Cardinals vs Phillies odds list the under on this prop at -105. Wheeler has been cashing plenty of over tickets to this number, but the Cardinals limit strikeouts and put the ball in play plenty. I think this prop goes under for just the second time in his last twelve starts.

The next prop I’m looking at is JT Realmuto o1.5 bases, Caesars Sportsbook lists the odds to this over at +130. Realmuto had the day off on Saturday, with Bryce Harper being out of the lineup he’s moved up in the order. An extra at bat could go a long way in cashing this bet. His hitting splits favor RHP and his career success vs Wainwright make this an enticing play at plus money.

You can create a 3-leg Same Game Parlay at Caesars Sportsbook with these two plays paired with O7.5 runs in the game with +590 odds! Check out our Caesars Sportsbook Review to see their latest offers and excellent mobile app features.