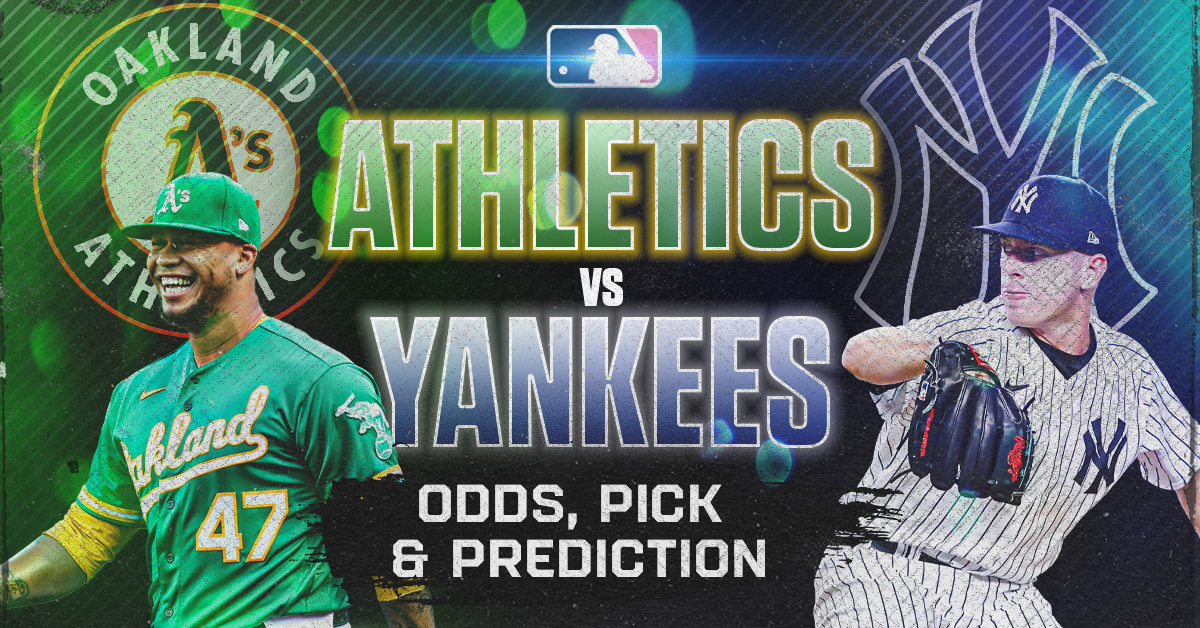 The Oakland Athletics and New York Yankees battle on Tuesday, June 28th, with the first pitch set at 7:05 PM EST. Oakland will start Frankie Montas (3-7, 3.21 ERA), and New York will start JP Sears (2-0, 0.00 ERA). The game will be played at Yankee Stadium in New York. The home team is listed as heavy favorites in the Athletics vs Yankees Tuesday MLB odds.

After letting pretty much all their best players go after the 2021 season, the Athletics have been nothing short of horrible in their 2022 campaign. They currently sit 21 games back of the Houston Astros and hold the worst record in baseball at 25-49. Surprisingly, Oakland’s pitching staff has actually been pretty solid. Their biggest issue comes offensively as their ability to manufacture runs is sub-par.

Let’s take a look at the Athletics vs Yankees odds at Caesars Sportsbook for June 28, 2022.

New York online sports betting markets list the Yankees as heavy favorites. However, Empire State bettors can get their hometown team to win by 2 or more at + money.

Click the banner below and use the promo code ‘OWNERSBOX15’ to get a $1,500 risk-free bet for Athletics vs Yankees.

The New York Yankees finished a frustrating series against the Astros over the weekend. One of the top storylines around the league was how they couldn’t get a hit for 16 straight innings. The Yankees prevailed in the final game of the series as Aaron Judge hit a walk-off home run to split the series. The Yankees are set to face a much weaker opponent in the Athletics and will look to add another series win to the stat sheet.

The Oakland Athletics are the worst team in baseball this season, so it is no surprise to see the Yankees listed as sizable favorites. The Yankees’ offense ranks second in Major League Baseball, while their pitching staff ranks the best. They average over five runs scored per nine innings. The Athletics, on the other hand, are one of the worst offensive teams in the entire league. They only average 3.18 runs per game while they give up 4.62. I don’t think anyone is surprised to see the odds for Tuesday night’s matchup.

The @Yankees have had 40 home games. 10 have been walk-off wins. 🤯 pic.twitter.com/j0DNThL2QS

Frankie Montas has been one of the few bright spots for Oakland as he has an ERA of 3.21. Since he gets extremely sub-par run support, his win/loss record sits at just 3-7. In his last start against the Seattle Mariners, he went eight innings giving up only two hits and no runs. He will have his hands full against a Yankees lineup that rakes right-handed pitching (2nd in MLB in wOBA and wRC+).

I’m going to attack a team total in the Athletics vs Yankees odds on Tuesday night. Digging deep in this game, I can’t see myself betting either side on the money line in this matchup. The Athletics are completely outmatched, and I just can’t find the value in betting the Yankees on the run-line or straight up.

I’m not going to overthink it and take the Yankees team total over at Caesars Sportsbook. The Yankees are a top-3 offense against right-handed pitchers this season. Montas has been solid, but the Yankees have too much to throw at him.

On the other side, the Athletics to score over 3.5 runs is priced at +120 at BetMGM.