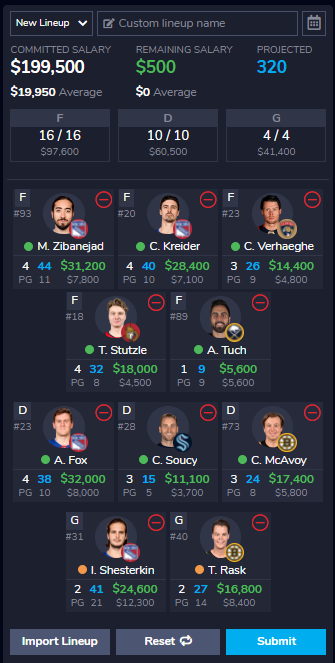 Fox and Makar are both having stellar seasons. Fox has proven that last year was not a fluke and that he’s a very talented defensemen. In his last 3 games, Fox is averaging an insane 22 Fantasy Points per game. In this span, Fox has 6 points, plus 7, and 9 blocks. He’s on an absolute heater right now and I think his crazy high price tag is worth it. He has very favourable matchups this week and 3 of them are at home.

I wanted to have Kreider in my lineup because if I truly believe Fox and Zibby will have strong weeks, this means their linemate, Chris Kreider should also have a strong week. I don’t love the price tag on Kreider, but if I can get two double digit fantasy point games from him I’d be happy.

Igor is the highest price goalie on OwnersBox and for good reasons. Igor is leading all OwnersBox in season average with 28 fantasy points per game. He’s projected to get two of the starts this week, I wouldn’t be surprised if this changes to three, so be aware.

TUUKA is BACKKKKK! The talks were true at the start of the season about how a Rask return was possible. Rask is the CHEAPEST goalie on OwnersBox right now. I think this is absurd based on good the Boston Bruins are. Rask could be the worst goalie in the NHL, but still get the win because the Bruins are that good. This is a must pick for your fantasy hockey teams this week. Rask is scheduled to start against the Ducks and Coyotes, which are two favourable matchups for Rask.

McAvoy has been very productive in his last 4 games, riding a 4 game point streak. He’s been logging a ton of ice-time recently and even got to the 27 mins mark against the Predators. McAvoy is strong choice for this price tag.

I love this value play for this contest of the week. Stuzle has obviously been a little bit of disapointment versus his expected production. Stuzle only has 18 points in 32 games this season and a horrendous -19. Why am I picking him this week? Stuzle seems to have found his groove in his recent couple of games, riding a 3 game point streak. Coach Smith has been noticing his play and has been playing him more than his usual time on ice. Stuzle is still playing powerplay 1 for the Senators, so he will always have a good opportunity to get points. Take a chance on Stuzle this week.