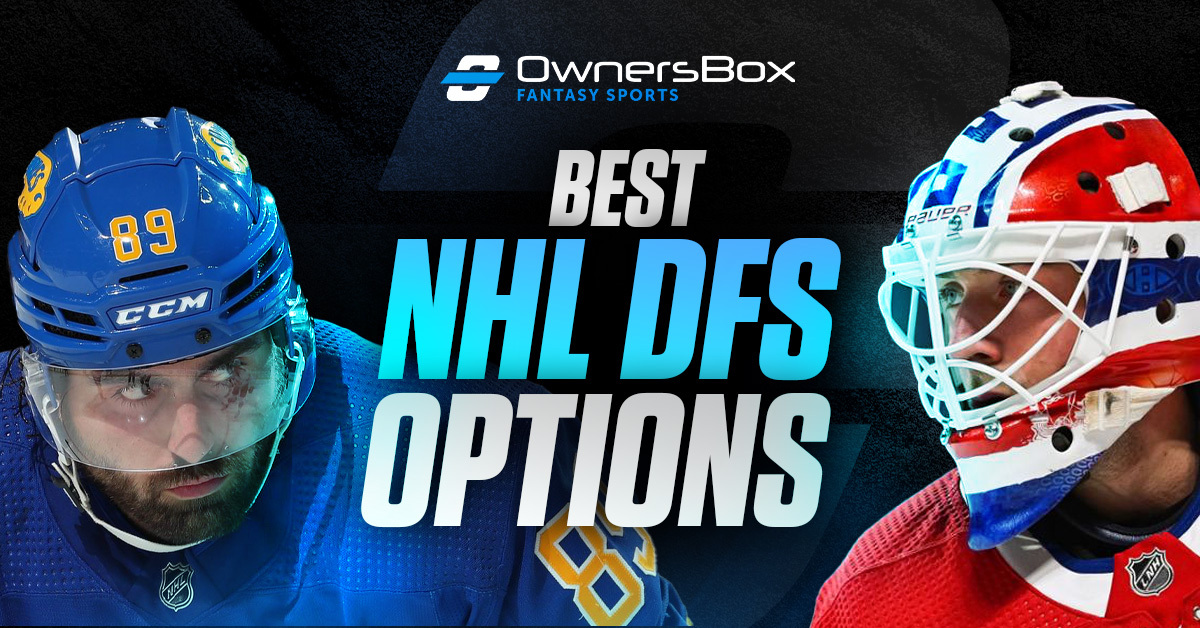 NHL DFS is so back, and we have tons of contests to enter at OwnersBox. Finding value in the daily fantasy hockey salaries is the hardest part, but that’s why I’m here. I’ve got three NHL DFS value plays for Thursday, October 20th to give you some leeway to spend on some higher-priced guys (Matthews, McDavid, Kaprizov, etc…).

Here are my three widely available daily fantasy hockey players to consider, including a forward, a defenseman, and a goalie.

New users who sign-up at OwnersBox can get a deposit match bonus of up to $500. Not to mention, users can get a free entry into the 3K Shootout NHL DFS contest, along with one free entry into the brand new Lightning Lineups fantasy game. This is one of the best fantasy sports promos available across all markets.

OwnersBox is the only place to play DFS in Ontario, so be sure to lock in your lineups North of the Border below!

The Buffalo Sabres have looked pretty solid to start the year, especially after knocking off the Edmonton Oilers. Alex Tuch has been their shiny, shiny star thus far.

Tuch currently holds the highest share of possible icetime amongst forwards at 31.1%, which translates to 18:40 TOI/GP. In three games, Tuch has two goals and three points with 10 SOGs.

Alex Tuch has his first of the season 🚨

The 26-year-old is tied with Rasmus Dahlin for the most shot attempts on the team, but he holds the highest xGoals rate at 0.81. It’s only three games into the season, but his goals per 60 minutes is at 2.14, and points per 60 minutes is at 3.21. He’s off to the hottest start of his career analytically, but he’s still super underpriced in NHL DFS contests tonight.

Calgary gave up the fifth most shots per game to right-wingers last year and have continued to do so early this year. Tuch is a steal and should give you solid fantasy point production tonight on the road.

Revenge game for Hampus? Not a great reason to throw someone in your NHL DFS lineup, but this is just a small part of the reason.

First of all, Lindholm has been the most valuable player to this Bruins team this season. He’s on the ice all the time. His share of possible icetime is 40.5%, which translates to 24:18 TOI/GP.

He’s averaging 4.95 fantasy hockey points per game this season, and we saw him get up to 8.8 against the Capitals when he scored his lone goal of the season. I could see him putting numbers all over the stat sheet tonight.

The Ducks are allowing the most shots per game this season, letting opponents fire off almost 43 per game. Playing on PP1, we could see Lindholm sneak one past John Gibson, and even if he doesn’t the Bruins will be spending so much time in the offensive zone he’ll be able to contribute value to your lineup at $5,100.

Usually, it’s smart to target teams that win or are at the top of the Stanley Cup odds, but the Canadiens are playing the poverty Yotes today so we have an exception with Mr. Jake Allen.

Allen has been playing surprisingly well for the defensemen the Habs have been putting on the ice so far this year. Allen is fourth in the NHL in Goals Saved Above Expected at 3.2. He’s singlehandedly winning games for Montreal, but he gets an easier one tonight with Arizona.

The Coyotes did just beat the Leafs, but they have very little offensive talent and it shows in the numbers. They own an Expected Goals For per 60 rate of just 1.8, which is second last in the NHL.

He’s coming back from parental leave after having his third daughter, and father’s always come back ready to kick ass after having a kid. He’s stopped 66-of-70 shots so far this year, and I expect him and the Habs to win big on Thursday night.

Allen poses the best value in terms of goalies in NHL DFS contests at OwnersBox on October 20th.