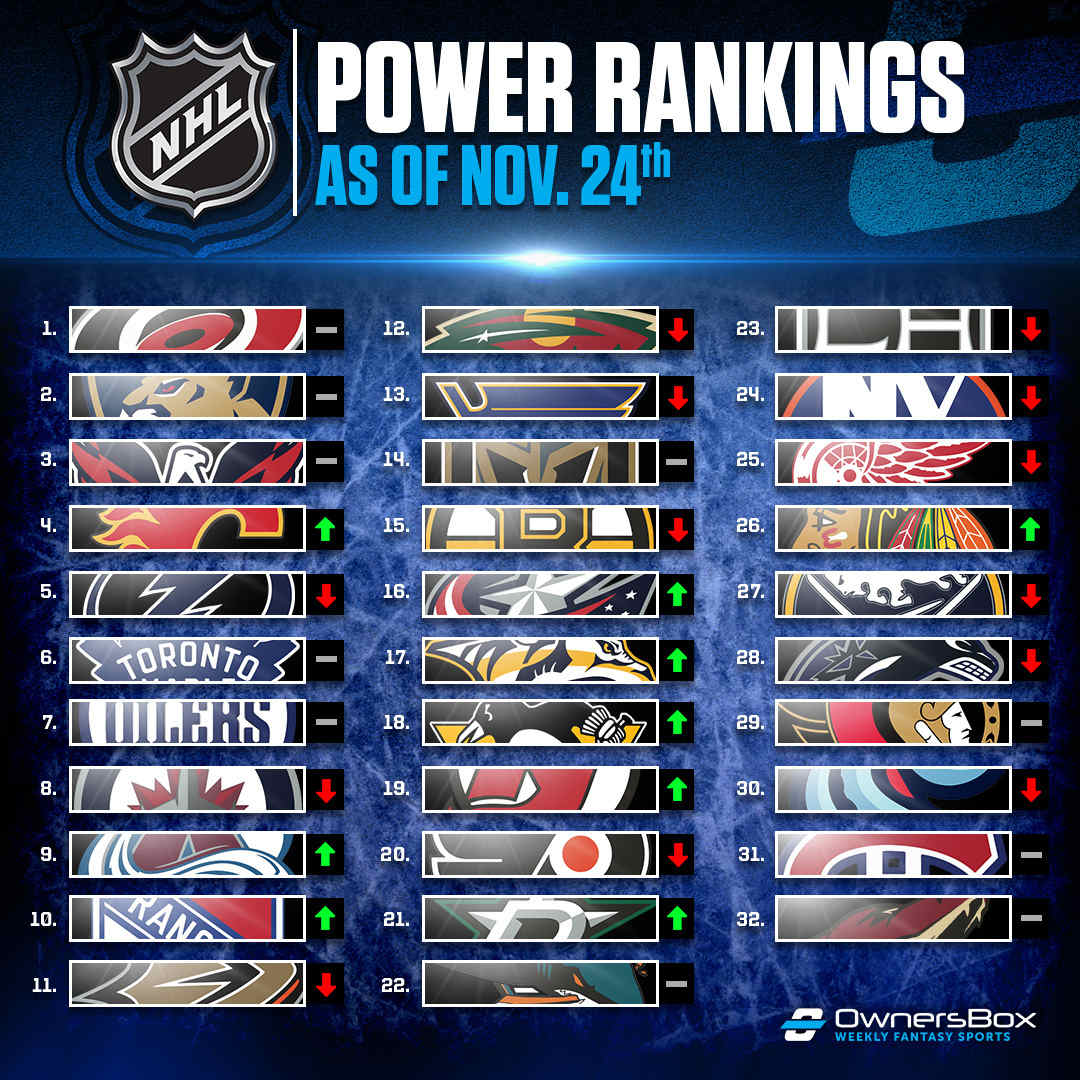 The 4th consecutive week the Hurricanes have occupied the top spot in the power rankings. There are no holes in this team: stars, incredible depth, solid defense and elite goaltending – and they are the clear number one cup contender at this moment.

The Panthers’ 8-0-0 start has slowed with a stretch of 5-2-3 in their last 10. With Barkov out, rookie Anton Lundell’s time at center for the Panthers is suddenly now.

Year-over-year the Washington Capitals continue to be a top class franchise with veterans leading the way on and off the ice. Ovechkin the ageless wonder continues scoring goals, bravo.

The only team in the top 5 not from the former Southeast Division, the Calgary Flames are on fire; 9-2-2 in their last 10, the best goal differential in the NHL at +30. Darryl Sutter has this clicking offensively and defensively and the rest of the league is on notice. Now, if only the team had real fans…

As back-to-back Stanley Cup Champions, the Tampa Bay Lightning have a ton of clout. 5-1-1 on the road this season and only one regulation loss in their last 10 has this team up in the power rankings.

The Leafs started slow, but they have been hot with an 8-2-0 run over their last 10. Shutdown third line of Kampf, Kase, Engvall looks great. Is this the year they get over the hump and win a playoff round?

An enigma wrapped in a riddle. The Oilers alternate games between absolutely dominating and looking completely listless. Depth in the bottom 6 and in net continues to be an issue, but rookies Ryan McLeod and Stuart Skinner look like mini-revelations so far. 8-1-0 at home and 5-4-0 on the road, this team could go for a good road game.

The Jets slide down from 5 to 8 after a rough 0-2-1 week. Even at .500 and with a worse record than some teams behind them in the rankings, the Jets maintain their standing as one of the top 10 teams as they look like a true contender throughout every single aspect of their lineup.

What’s surprising about the Avalanche is to find this team outside the Top 5 at 9th overall. Though not in the top 5, team has risen from 16 to 9 this week in the rankings, as a red-hot 5-game win streak has pulled the club back in the race in the Central Division.

The Rangers smell somewhat fraudulent with only 4 regulation losses and yet an even goal differential through 18 games. It means the losses have been real bad, such as the game in Calgary. Nevertheless, a top 10 spot it is for the Rangers due to their season record and consistently great play from Adam Fox and Igor Shesterkin.

The Ducks were humbled a bit this week after an electric 8 game win streak. Still, this has been among the most surprising so far in 2021-22 and remains way higher in the power rankings than expected. P.S. Dallas Eakins looks like an early contender against Darryl Sutter for the Jack Adams.

I don’t know how the Minnesota Wild do it. If you look at their depth at center you’d be absolutely amazed that they’re a contending team. Another of the surprises so far this year, lets see how far the Wild can go this year.

After a scorching hot start, the Blues were singing the Blues the last two weeks, reaching the low of lows in a loss to the listless Coyotes, a moderate bounce back this week, but this is a contender that needs to find its mojo again.

Injuries have taken a toll on the Knights. Max Pacorietty is expected back this week, a positive. A 7-3-0 stretch in the last 10 while super injured, another positive. The prospect of Jack Eichel back for the playoffs if the team can make it there: an ‘ace’ up their sleeve.

This team misses David Krejci way more than they could imagine. Look for a strategic acquisition for a new 2nd line centre, maybe a Thomas Hertl type. For now, the Bruins need to find scoring beyond the perfection line.

10 wins already? How about that for exceeding expectations. Bjorkstrand and Merzlikins are two of the most underrated players in the NHL. Though, overall this team is over-performing and expect them to have two picks in the top 12 along with Chicago’s 1st.

The Penguins are up 7 spots after a dominant week. The absence of both Crosby and Malkin crippled this team at center, but with Crosby back now, things are looking up, and maybe the Penguins can make one more run with this core. P.S. Guentzel is a great play in OwnersBox contests with Crosby back.

The Devils did well to stay afloat without Jack Hughes. Hughes is back, this team is feisty, but still in the whatever tier as they’re not a contender and they’re not a basement squad any more.

The Flyers are fickle. All offense no defense. Hart needs to stand on his head to win games. The wins look great, the losses look awful, perfect for the whatever tier.

The Stars were off to a rough start, but don’t let this team get hot. The forward depth is sound, the defense is talented, and Oettinger is emerging as a embarrassment of riches as 3rd starting quality netminder for this team. This feels like a team that quickly rise into the top half of these rankings in the coming weeks.

Really not much to say here. .500 on the season somehow? James Reimer playing well, Jonathan Dahlen looking like a diamond in the rough when healthy. Will this team put things together all season and compete for a wild card spot? Highly doubt it.

Hot start, ugly losing steak, hot run again. Danault was a sharp signing, but this team finds itself at 23 and part of the whatever tier. Really the teams in this tier can be ranked in whatever order you want, all have 8 or 9 wins, all aren’t contenders or basement dwellers- probably not making the playoffs but also not drafting Shane Wright.

Big road trip to start the season didn’t go great. Now COVID is here. New arena brings back hope for the season, and theres still time to catch up in the standings, but time is running out quick. When the all defense no offense thing is clicking, it looks amazing – when it’s failing it looks like a horrible strategy.

The season started out decent, but the ‘wheels’ have fallen off. Rookies Lucas Raymond and Moritz Seider continue to be bright spots and likely Calder favourites if they can hold off Ducks’ rookie Trevor Zegras.

Except for a brutal loss in Edmonton, things have made a swift 180 under new head coach Derek King. The season can’t be saved. The horrible off season move to acquire Seth Jones will haunt. But for now the team has moved up a few spots.

Surprising that they are not in the next tier.

The Dumpster Fires Tier – No Power

Avert your eyes. It is time for a change in management and coaching for this team. The defense is just putrid, awful, horrendous. As for the offense, Elias Pettersson doesn’t the star form any more. J.T. Miller looks great, but he’s the long bright spot up front.

COVID outbreak cancelled 3 games, and the Senators were able to put up 5 goals on the Avalanche in their return to play; the issue is they gave up 7 goals. Drake Batherson has been the loan bright spot when healthy, and any pre-season aspirations for this team ascending from the dumpster fire tier to the whatever tier have evaporated quickly.

Seattle drafted to be bad and well they’re bad.

Its cliche, but from the Stanley Cup finals to this horrific start, what went wrong?

The absolute dumpster fire is heating up? Points in 6 of the last 8 games. Still, -35 goal differential isn’t good. This team is tanking and its working.

Use promo code NHL10 for a free entry into the OwnersBox NHL Contest of the Week! Check out Cherry Pickin Fantasy Hockey on the OwnersBox YouTube!