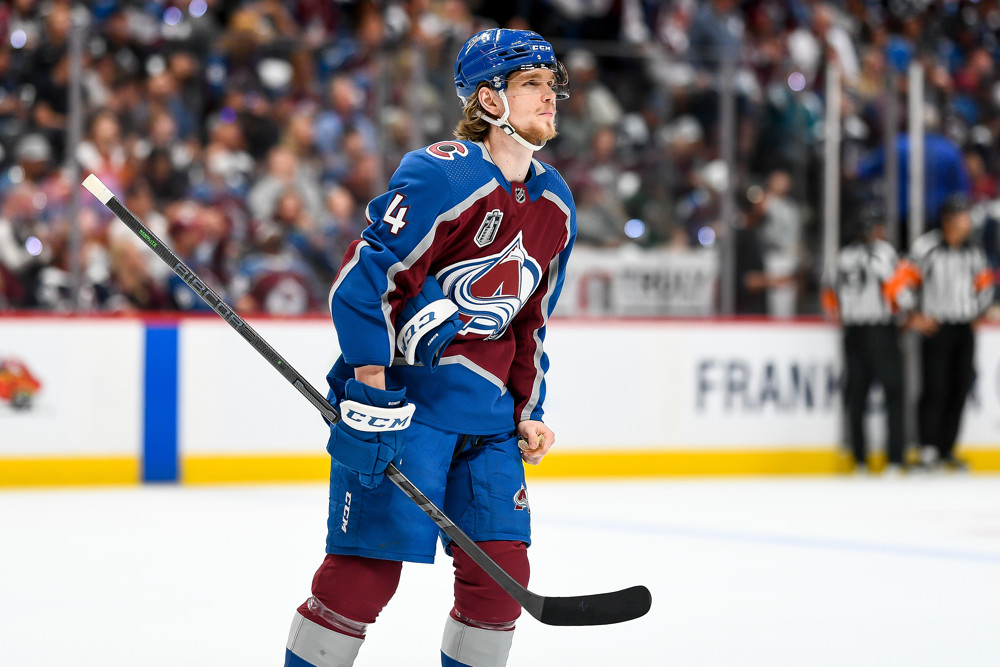 Fantasy leagues are often won and lost based on who hits with mid-to-late round picks. You need those guys that could provide elite production beyond the usual suspects. Here are my three Breakout Fantasy Hockey players that fit that bill, including a forward, a defenseman, and a goalie.

New users who sign-up at OwnersBox can get a deposit match bonus of up to $500. Not to mention, users can get one free entry into the brand new Lightning Lineups fantasy game. This is one of the best fantasy sports promos available across all markets.

And Hintz is quite literally at the center of it.

The 25-year-old center was a near point per game player last season, with 37 goals and 35 assists in 80 games. Here’s a look at all the goals.

That production was actually down a bit from what Hintz was able to do in the COVID-shortened 2020-21 wherein he posted 15 goals and 28 assists in 41 games.

Don’t fret about Robertson’s status. Hintz is meshing well with Mason Marchment, and 40 goals / 90 points is not outside the realm of possibility here.

Oddsmakers set his over/under for goals at 33.5, and that’s an easy over especially considering he’s no longer shackled by a defense-first coach in Rick Bowness.

The 21-year-old defenseman has been plagued by concussions since being drafted 4th overall in 2019.

The Colorado Avalanche secured that pick thanks to the Ottawa Senators, who deferred a first-round pick acquired in the Matt Duchene trade in lieu of selecting Brady Tkachuk 4th overall in 2018.

The 2022 Stanley Cup playoffs were a confidence builder for Bowen Byram.

Byram has all the talent in the world, and he showed glimpses down the stretch last season and through the Avs’ run to a Stanley Cup after returning from concussion down the stretch.

Byram posted 5 goals and 12 assists in 30 regular-season games, then nine assists in 20 playoff games. That was achieved playing under 20 minutes a night, and with limited power play time.

Yes, he’s playing among a group of defensemen that includes Cale Makar, Devon Toews, and Samuel Girard. That could, however, free him up to do his thing, and you’ll likely get tremendous value out of a somewhat forgotten top defensive prospect.

The Ottawa Senators garnered many headlines this summer with dramatic upgrades to the lineup, including Claude Giroux, Alex DeBrincat, and Cam Talbot.

It’s the latter who was penciled in to compete with Anton Forsberg for time in net, forming a potential fantasy value-crushing 1A-1B scenario.

As it happens, Talbot will be out 5-7 weeks to start the season, giving Forsberg a chance to build on some nice numbers posted last season.

Check his month-by-month save percentage from December on:

There was a bit of a drop off as he assumed more starts in Ottawa, but overall his numbers were incredibly strong, and Ottawa’s new look offensive attack should help tilt the ice in the other direction and lighten his load.

In all honesty, he was among some of the best goalies in the NHL last season.

Clearly, Shesterkin should (and will) win the Vezina and perhaps even the Hart.
But there're a few other interesting storylines. Anton Forsberg has quietly put together a very strong campaign and Kuemper started poorly but been solid since. pic.twitter.com/55GeEqZtuB

With the injury to Talbot, Forsberg is likely to make at least 50 starts. If the Senators pop as hoped and are in playoff contention late in the season, it’ll be in large part due to Forsberg’s efforts.