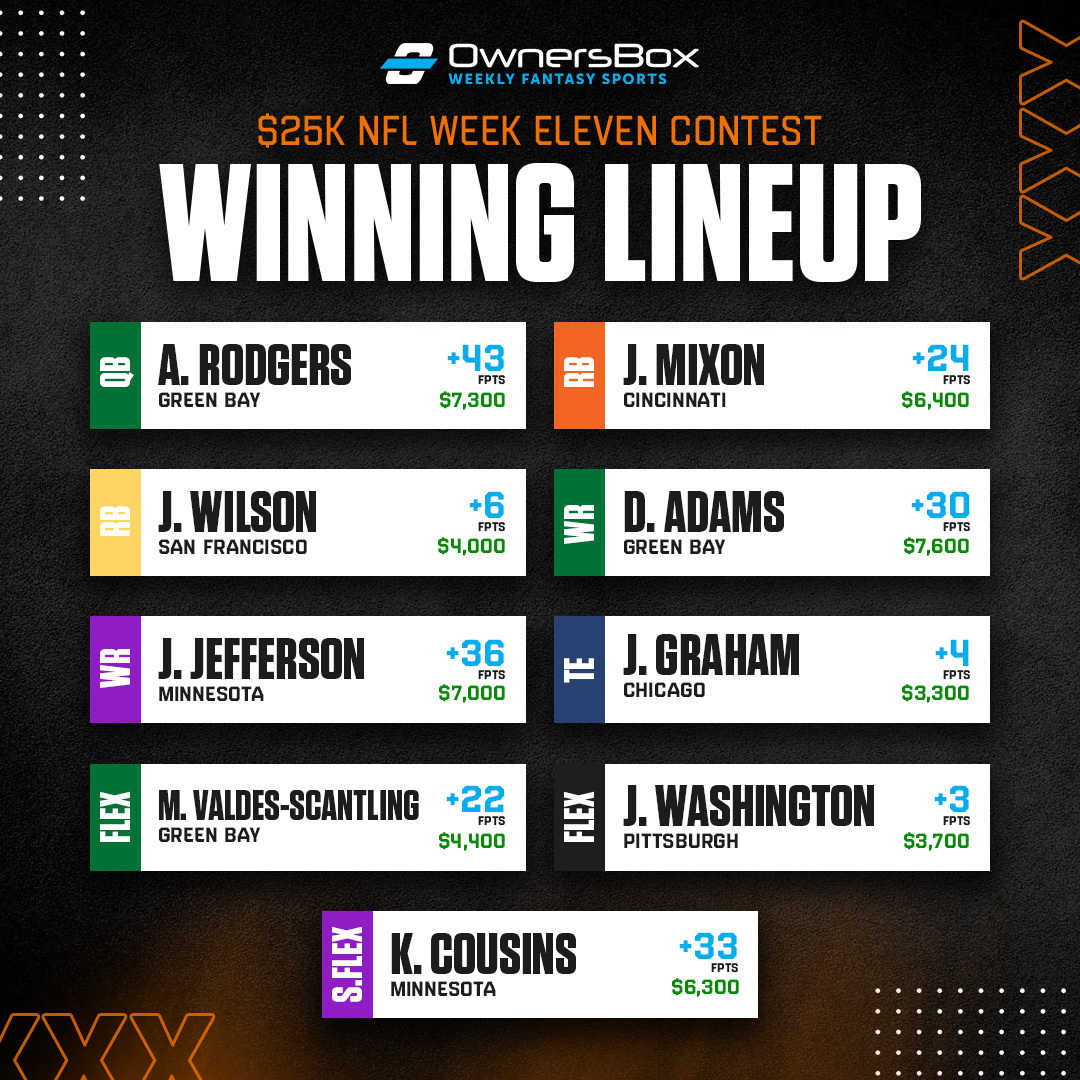 Week over week there has been a concrete trend of the winning lineup featuring multiple quarterback/wide receiver stacks, and often the stacks are from the same game with opposing quarterback duos.

The strategy is clear: stacking a same offense wide receiver with your quarterback raises the ceiling of your lineup; furthermore, choosing multiple quarterbacks and receivers from the same game, raises your lineups fantasy point ceiling even further as if the game is a shootout, the lineup will rack up fantasy points. This week’s lineup is case and point as the Packers/Vikings game was a shootout and the two stacks from the game combined for a whopping 162 total fantasy points.

Joe Mixon continues to be an incredible value in OwnersBox contest as his high volume role often translates to a great fantasy return. Jeff Wilson was the highest selected player this week at 56.7% selected and only returned 6 points. Often it is smart strategy to avoid the glaringly underpriced player as they will be heavily selected and if they have a bad game, your lineup will have an upper-hand on the many lineups that selected the player. But in this case, although Jeff Wilson only returned 6 fantasy points, the lineup was able to prevail thanks to the returns from the 5-player game stack.

There is a trend emerging in winning lineup articles. The winning lineups feature high priced QB/WR stacks and finds bargains at running back. Despite Aaron Ekeler and Jonathan Taylor scoring 41 and 52 fantasy points respectively, neither was in this winning lineup. Instead this lineup saved salary at running back and payed up at QB and WR, a strategy that has shown to work week over week.

This lineup was rounded out by two low-cost receivers: Jimmy Graham at tight end and James Washington at flex. Both didn’t fare well as Jimmy Graham only had 4 points and for a second straight week, the winning lineup featured Steelers’ wide receiver James Washington. But for the second straight week, he was essentially a non-factor in the lineup’s grand prize winning success.