With the NFL Draft being over and fantasy football season starting to kick into high gear I am going to go over an 8-team SuperFlex dynasty rookie mock draft. I made four different picks in this draft, and will discuss each of them individually. I had the second pick in this snake draft.

To begin, Breece Hall was selected with the first overall pick in this mock draft. He is the consensus first pick in dynasty rookie drafts. This is for good reason as he is projected to be the Jets starting RB for the foreseeable future. This is a no brainer pick as he should be going first in all of your rookie drafts.

With the second pick in this draft and my first pick, I chose Treylon Burks, WR, for the Tennessee Titans. Burks was a three year starter for the Arkansas Razorbacks, where he amassed 146 receptions, 2,399 receiving yards, and 19 touchdowns. Burks is a tough 6”2 225 pound physical receiver who can also beat you down the field with speed. His physical and bruising style of play means that he excels in yards after the catch and averaged 9.3 yards after catch per reception which was 6th best in the FBS in 2021. He finished first in this loaded WR class in yards per route run at 3.57 and yards per route run when lined up outside at 6.08. Additionally, Burks is a fantastic option in the screen game where he had 18 catches for 219 yards last year. 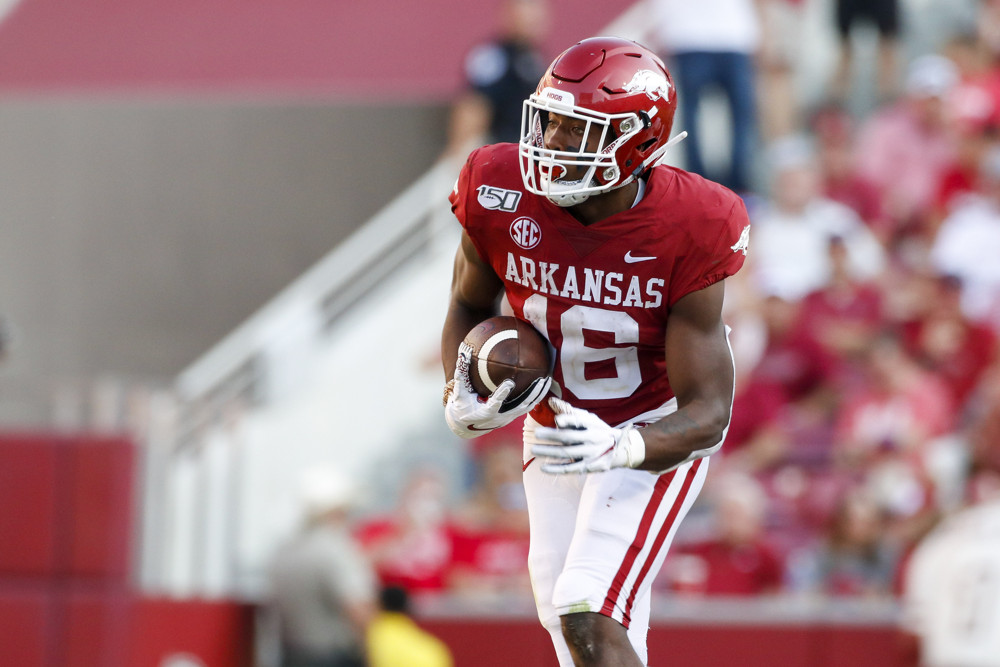 With that being said, the biggest reason I am drafting Burks in all my leagues this season is because of opportunity and volume. The Titans two best receivers from last season, A.J Brown and Julio Jones are now both on different teams. This means the Titans WR room consists of Treylon Burks, Robert Woods, Nick Westbrook-Ikhine, Dez Fitzpatrick, Kyle Phillips, Josh Malone, and Racey McMath. Other than Robert Woods, who is coming off a torn ACL last season the other WRs in the room only have 59 career receptions combined.

That being compared to A.J Brown who had 63 receptions last season alone and a target rate of 32.9% which ranked 4th in the NFL. Additionally, Julio Jones although a down year is still regarded as one of the best WRs in the NFL with a target rate of 21.4% in 2021. If that is not enough Burks even has some rushing upside as in his final season at Arkansas he had 14 carries for 112 yards and a touchdown.

The other players that I considered at this draft spot were Kenneth Walker, Jameson Williams, and Garrett Wilson. Kenneth Walker is arguably the most intriguing player this year in dynasty rookie drafts as he is being selected anywhere from second to around tenth. This is because he is stuck in a loaded Seahawks RB room, but possesses all the talent to be an RB1 in fantasy. Jameson Williams and Garrett Wilson are my number two and three ranked wide receivers. Both of these players are very talented and are fantastic fantasy options, but also have major question marks at quarterback, and have other good young WRs on their team. The Lions who drafted Jameson Williams already have Amon-Ra St Brown and just signed DJ Chark this offseason. The Jets have sophomore QB Zach Wilson and WRs Elijah Moore and Corey Davis.

With my second pick in this draft, and the seventh pick of the second round I selected former Liberty QB Malik Willis. Willis is projected to be the backup this season in Tennessee and will most likely be for the next two years until current QB Ryan Tannehill’s contract expires. Once his contract expires in 2023 he will be 34 years old, and I think that will be Willis’s time to take over as the starter.

Willis started his college career at Auburn where he appeared in 12 games over two years, but only had 14 passing attempts. He then transferred to Liberty in 2019 where he became the starter and threw for 5,112 yards, 47 touchdowns, and a passer rating of 103.7 in two seasons. Willis is an electrifying player with dual threat capabilities and a cannon of an arm. Willis ranked first in FBS last season in big time throw rate at 11% which is the second highest PFF has ever charted. Additionally, his mobility and willingness to escape the pocket will add massive fantasy value as he ran for 1822 yards and 27 touchdowns in his time at Liberty. Willis has 146 career broken tackles and some teams were even attempting to make him into a RB.

Willis is a very polarizing pick, as you draft him knowing that he will not start for at least another two years, making him a draft and stash kind of player. For these reasons I also considered Desmond Ridder in this spot as he is another third round rookie QB, but is one with an easier path to the field in the immediate future. He is currently the backup to Marcus Mariota in Atlanta, and was regarded by a lot of draft experts as the most NFL ready QB in the draft.

With my second pick in the third round, I drafted former Alabama WR John Metchie. Metchie was the Houston Texans first pick of the second round and they traded up to pick #44 to get him. Metchie will come into Texans training camp as WR4, but only has Nico Collins, Chris Conley, and Brandin Cooks, who has constantly been in trade talks, in front of him. I expect he will start the season as their WR3 and move his way up to WR2 by the end of his rookie season.

The concern from fantasy owners when drafting Metchie is that he is coming off a torn ACL that he suffered at the beginning of December, If not for this injury Metchie was viewed by many as a late first round pick in the NFL draft. Metchie has said that he expects to be cleared to play by June and has said that, “My recovery is going really well. All the doctors say it’s going really well, So I shouldn’t have any issues there at all.” Metchie was a two year starter at Alabama where he caught 155 passes for 2081 yards and 14 touchdowns.

He is a fluid and polished route runner who wins with his football IQ and craftiness. He projects as a slot receiver in the NFL which will help showcase his advanced release package and technical proficiency. Metchie will be a reception monster in the NFL as prior to his ACL tear in 2021 he had 96 receptions in 12 games which was 3rd best in the FBS. He also boasts a catch rate of 72% which is better than fellow rookie wide receivers Garrett Wilson, 68%, Chris Olave 63%, Jameson Williams, 67%, and Jahan Dotson, 62%.

I was hoping to draft David Bell at this spot who was selected the pick before. This is because he has more of an initial role on the Browns as their only WR who will demand targets is Amari Cooper and the rest of the room is very thin. Additionally, I think he has more upside than Metchie as he can do so many different things on the football field and will be helped by having Deshaun Watson at QB instead of Davis Mills.

With my fourth round pick and the last pick, I will be discussing I selected Jelani Woods, TE, who plays for the Indianapolis Colts. Woods started for three years at Oklahoma State where he was mainly used as a blocking TE compiling 31 receptions for 361 yards and four touchdowns. He then transferred to Virginia where he was utilized much more in the passing game, which caused him to break out putting up 44 receptions for 598 yards and eight touchdowns in his lone season there.

Woods is an athletic specimen standing at 6”7 with a 6”9 wingspan, he weighs 260 pounds and recently ran a 4.61 40 yard dash at the NFL combine. Furthermore, he put up 24 reps on the bench press at the combine and has a SPARQ (speed, power, agility, reaction, and quickness) score of 126 which puts him in the 93rd percentile for TEs. He is developing as a receiver and is fairly raw, but is a good blocker so will still see the field for the Colts and should open the season as their TE2.

This bests an all time score that held for more than 20 years.https://t.co/U4Ysrmq76y #RAS pic.twitter.com/3vULs3gPQU

Something the Colts love to do with their TEs is using them as red zone targets and throw fade routes near the goal line. Woods fits that mold very well with his frame, and his ability to make contested catches. He had 11 last season, good enough for eighth best in FBS and a contested catch rate of 61.1%. Lastly, he has a catch radius score of 10.42 which ranks in the 98th percentile of NFL TEs. He is a player I believe will take a few years to become a valuable fantasy player, but has some value in the meantime with fantastic future potential.