Players to Target & Fade in the Running Back Dead Zone 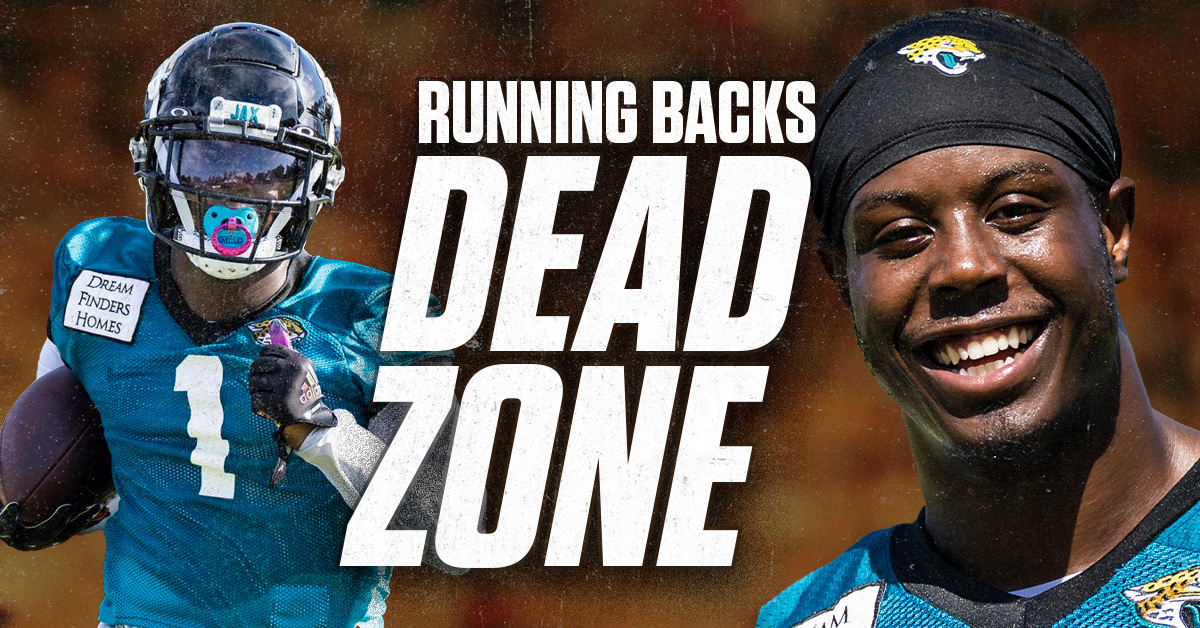 The running back dead zone is one of the most popular topics to discuss in fantasy football drafts every season. Being able to navigate it properly can  be the difference between winning your league or a harsh fantasy football last place punishment. The running back dead zone is determined to be between rounds 3 to 6 of your draft, these players are seen to have limited upside and high bust potential.

Last season there were more than a few running backs in the dead zone that could have tanked your fantasy football season, the most notable would have to be Miles Sanders, Mike Davis, Myles Gaskin and Chris Carson. But there were also a few that would have proven to be valuable to a potential championship run in D’Andre Swift, Javonte Williams and Damien Harris.

Running Backs in the Dead Zone

What sticks out from the history of the running back dead zone is finding value in youth. Most of the running back busts in this part of the draft come from veteran players who are being draft because of their depth chart and not their talent. AJ Dillon is the type of player many fantasy managers think can’t be the top back on his own team, but his talent tells me otherwise.

Dillon is a bust proof running back this 2022 fantasy football season, for a number of reasons. Looking back at last year, Dillon actually out-touched Aaron Jones inside the red zone, his 41 red zone carries ranked 10th at the position in 2021. With Davante Adam’s departure, don’t be surprised to see this team run the ball more in the red zone.  Green Bay threw the ball at the league’s 5th highest rate in the red zone, if this comes closer to league average we could see many more rushing touchdowns.

Matt LaFleur calls Aaron Jones and AJ Dillon running backs “1A and 1A.”

“They’re two of the premier backs in our league, in my opinion. They can do anything.”

Head coach Matt Lafleur has called this a 1A-1A tandem and it’s possible Aaron Jones sees more work as a receiver with limited pass catching options. Dillon is a pretty decent pass catcher himself, he has 37 receptions for 313 yards last season. So don’t think that Dillon is only valuable for his scoring upside on the ground.

David Montgomery is the case of a player who many anticipate is in line to be the clear workhorse in his offense. He benefitted from an 80% opportunity share during the 2021 NFL season. But the concern is in his efficiency and ability to score in this offense under a new head coach and offensive coordinator.

The Bears running back rarely breaks big plays, which is something he will need to do in a low scoring Chicago offense. Montgomery had a breakaway run rate of 3.1%, which ranked 37th at the position. His counterpart Khalil Herbert made the most of his limited opportunity, any work from the sophomore will significantly hinder Monty’s fantasy finish.

This isn’t a player you should be targeting the first four rounds of your fantasy football draft, there is much better value and upside at the wide receiver position in this spot. He thrives on usage and with a new offensive coordinator 270+ touches is no guarantee and I’d expect to see the mobile Justin Fields seeing more designed run work.

The Jaguars former first round pick is a league winning running back in my books. This reminds me of the situations D’Andre Swift and Javonte Williams were in last season, where his role isn’t solidified but his talent is there. A great recipe for a top-12 running back finish is being able to contribute plenty of receptions. Etienne can be a 60+ receptions and 150+ carries type of back.

James Robinson coming back from an achilles tear this quickly is a red flag for his production. Head coach Doug Pederson has said good things about his health and his role as a result but I find it hard to believe. Trevor Lawrence loved to target Etienne at Clemson but in the NFL he targeted RB’s at one of the league’s lowest rates in 2021. Getting a player as talented as Etienne and with previous rapport could result in a drastic change.

There is a lot of uncertainty with Etienne, he is certainly a risky selection in fantasy football drafts given there is no history to work off of. In my mind these are the types of players you need to be willing to gamble on in the best fantasy football draft strategy. After finally ridding themselves of Urban Meyer I think this offense is in for a major bounce back in production and Etienne will be at forefront.

It pains me to pile on a guy like Antonio Gibson, who I think is a very talented player, but avoiding him in the running back dead zone is mandatory. Gibson had the fourth most touches of any running back in fantasy football last season, as well as the 4th most red zone touches with 52. Despite this he finished as the RB10 overall and the RB19 in fantasy points per game.

As we look ahead to this season Gibson seems to have fallen out of favor with head coach Ron Rivera. Reports out of camp and from Rivera himself indicate a committee of backs with Gibson, rookie Brian Robinson and pass catching specialist JD McKissic. Taking away Gibson’s volume is going to be catastrophic as he averaged 0.71 fantasy points per opportunity in 2021 (50th).

We’re also talking about a Commanders team that has done little to improve it’s roster. The defense gave up 25.5 points per game last season, which doesn’t bode well for positive game scripts and being able to run the football. Gibson was a wide receiver in college, I still think he can make plays and compete for opportunity as a pass catcher. My concern is Brian Robinson stealing valuable scoring opportunity inside the red zone.

Gibson should be valued among some of the other low floor players at the position in the 7th to 9th round, instead he’s being taken in the 5th. This is a clear must avoid running back in your drafts this season.