It’s that time of year again, the NFL Draft is over and it’s time for fantasy football managers to get into their 2022 dynasty rookie draft.  The next Najee Harris or Justin Jefferson is out there somewhere. But for every Ja’Marr Chase, there is a Jalen Reagor. So identifying which is which is crucial.

In this article we will go over three players that you should avoid drafting in your 2022 dynasty rookie draft. These players either don’t have the necessary talent to succeed, are going to have a tough time carving out a role in a crowded offense or don’t have the draft capital invested that makes for long term fantasy relevance.

Your 2022 dynasty rookie draft is going to look a bit different then years past, especially in SuperFlex leagues. There was just one quarterback taken in the first round of the NFL Draft, that being Pittsburgh’s Kenny Pickett. So in the first round of your draft you’ll be focusing on the skill position players at wide receiver, running back and tight end.

Talent is going to win out in the end, even if they enter a roster farther down on the depth chart, if they have the talent necessary to win at the NFL level they will get their opportunity. In dynasty fantasy football, patience is key, often these rookie players won’t be weekly startable assets until ideally late in year 1 but even year 2 and beyond.

There are always a few players that well outperform their draft capital invested, that is why the team they go to is always of high priority when evaluating who to take in your dynasty rookie draft. Amon-Ra St. Brown, James Robinson and Alvin Kamara are great examples of that. 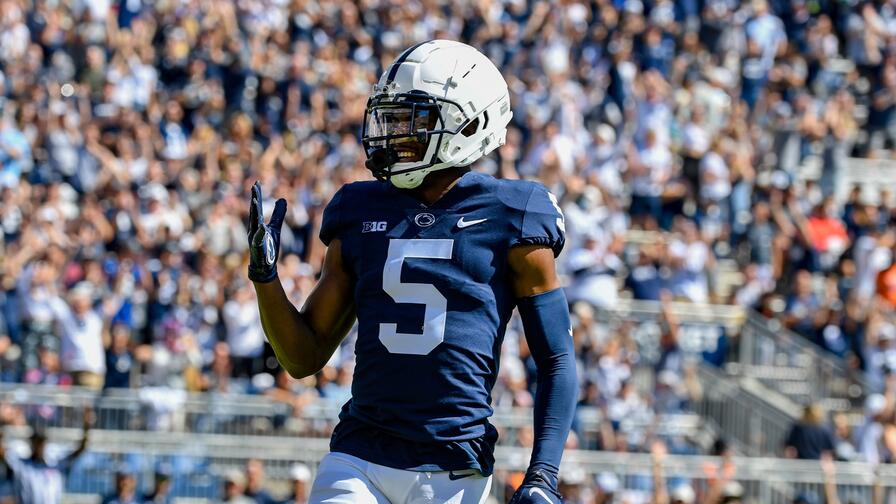 The first player I am avoiding in my 2022 dynasty rookie draft is former Penn State wide receiver Jahan Dotson. Dotson was the 16th overall pick in round 1 to Washington, being one of the more surprising picks of the first day. He’s coming off a very successful senior season, amassing 1183 receiving yards and 13 touchdowns.

Dotson’s current ADP in 2022 dynasty rookie draft’s is right around the turn from the first to second round in 12-team dynasty fantasy football leagues. In my dynasty rookie rankings he isn’t in the same tier as the wide receivers going in front of him. Christian Watson, Skyy Moore and Chris Olave are coming into a roster where being the WR1 is attainable.

In the last hour:

Night of the WR.

The situation for Dotson is quite different in Washington, Terry McLaurin is the unequivocal #1 passing option in the offense. Last season his 24.5% target share ranked 19th at the position. Being the second option in an offense quarterbacked by Carson Wentz doesn’t bode well for fantasy value. Wentz ranked 21st in YPA and 18th in deep ball passes in 2021. If he doesn’t get volume, then he needs explosive plays and Wentz doesn’t offer that.

The last and final thing that concerns me with Dotson is his talent. Dotson has excellent hands, perhaps the best in this class, he can make plays in traffic and has a great catch radius. But I struggle with his ability to create separation and make defenders miss. His 4.43 40-time does not show up on the field and he lacks the physicality to get off the line in press coverage.

The Falcons had one of the more perplexing performances on NFL Draft weekend. After deploying one of, if not the worst pass protection unit in the NFL last season the Falcons didn’t address the offensive line until ROUND 6! Instead choosing to spend a top-10 pick on a WR, their third round pick on Ridder and a fifth rounder on a running back.

These rookies are not being well positioned to be successful at the next level and that’s on the Falcons front office. Look at the struggles Zach Wilson had in year 1 with New York, why would that change if a less talented Desmond Ridder is promoted to a starting role in Atlanta? This is almost surely going to be one of the worst teams in the NFL in 2022.

Ridder is not worthy of an early second round pick in your 2022 dynasty rookie draft. Being a third round pick in the NFL Draft is not substantial draft capital for the quarterback position. Ridder’s biggest knock as an NFL quarterback has been his accuracy and that is something that you can’t live without in the NFL.

I see the Falcons adding another quarterback, with higher draft capital, in the 2023 NFL Draft. This will crush his dynasty fantasy football value and there just isn’t enough upside for you to want to hang onto him after that. I’d rather take Malik Willis or Matt Corral if I’m picking in that early to mid second round of 2022 dynasty rookie drafts.