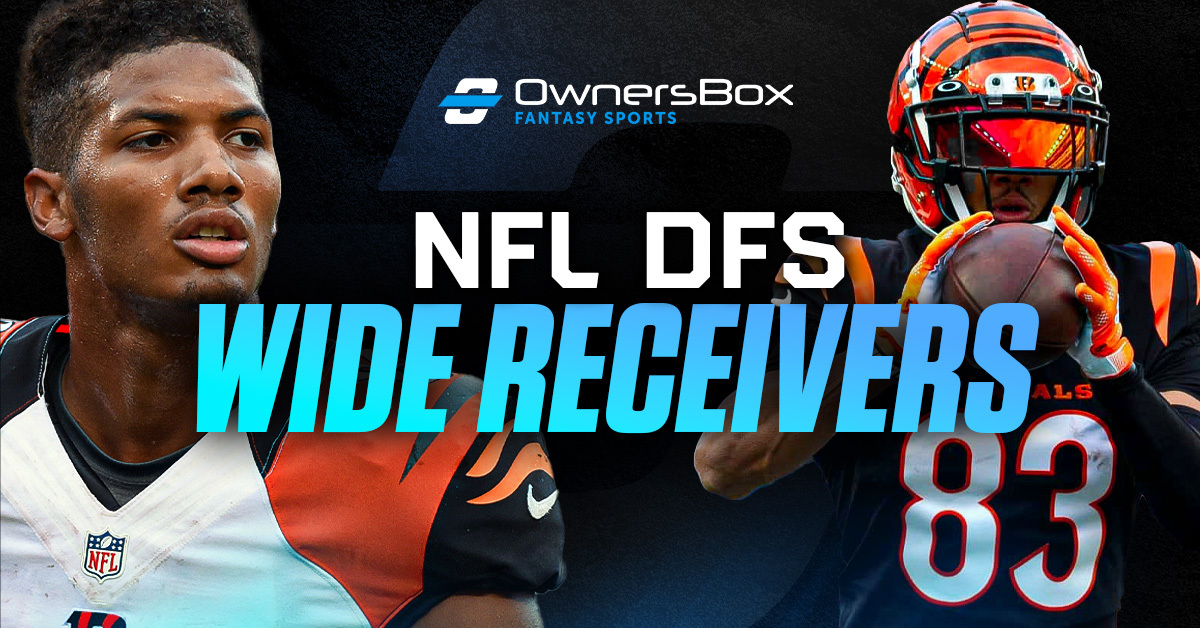 Week 2 is here, and we’re back with three more NFL DFS players to lock into your OwnersBox contests for Sunday, September 18th. Last week we looked at SuperFlex starts, but this time around, I’ll be taking a stab at three wide receivers that are MUST STARTS. Players like Tee Higgins, Keenan Allen, and other WRs have gone down with injuries, which means there will be undervalued players all over the board.

Michael Pittman Jr. finished as the WR5 last week, finishing with nine catches, 121 yards, and one touchdown against the Texans last week. Pittman has another great matchup against an AFC South rival, which is why he’s one of my must-start NFL DFS wide receivers this week.

The Jaguars had the fourth worst PFF coverage grade in Week 1, allowing Carson Wentz to throw for 313 yards and four touchdowns. Jahan Dotson and Curtis Samuel both finished inside the Top 16 of WRs in Week 1. Not to slight these two receivers, but Pittman is a tier above. At $6,100, the USC product should definitely be able to have an even bigger week against this Jags secondary.

Both safeties, Rayshawn Jenkins and Andre Cisco, posted horrid PFF grades. This leads me to believe Pittman will be able to stretch the field, so look for some big plays from the Colts in this AFC South showdown.

Pittman was limited at practice Wednesday, and not at practice Thursday, so be sure to monitor his injury news as game time approaches.

This could be a big week for Tyler Boyd for a couple of reasons. Tee Higgins suffered a concussion in Week 1 and continues to go through the protocol. Higgins did not participate in practice on Thursday, and if he ends up missing Sunday’s game, Tyler Boyd could see a nice uptick in target share.

Boyd finished with seven targets in Week 1 against a really tough secondary. The Cowboys’ secondary is much worse and will be much easier to exploit for Boyd as a slot receiver.

Most routes run in Week 1

Boyd has played two games without Tee Higgins since they’ve been teammates, and he’s put up solid fantasy football performances in both. In one game he scored a touchdown on four catches and just under 40 yards. In the other game, he finished with nine catches and 118 receiving yards.

Boyd is being priced in OwnersBox contests as the same as Seahawks WR Tyler Lockett. I’d much rather have a Joe Burrow led receiver than Geno Smith. More to that point, they’re calling for an absolute downpour in San Fran on Sunday.

I really like Donovan Peoples-Jones at this price as my best value NFL DFS wide receiver pick. If Devin Duvernay can put up WR10 numbers, so can DPJ.

Peoples-Jones was targeted 11 times in Week 1 against the Panthers. That’s five more than Amari Cooper, and with such a fresh receiving core, it seems like Brissett has found his favorite guy.

Peoples-Jones lined up all over the line of scrimmage as well. He predominantly lined up out wide, but he had a solid amount of snaps in the slot. This leads me to believe they are trying to find ways to get this playmaker the ball. He finished with a higher PFF grade than Amari Cooper in Week 1, as well.

I think Amari Cooper will get a lot of attention from Sauce Gardner in this game, which means DPJ will most likely line up against D.J. Reed. Peoples-Jones is being offered at a great price in NFL DFS Ontario contests and all around the US.