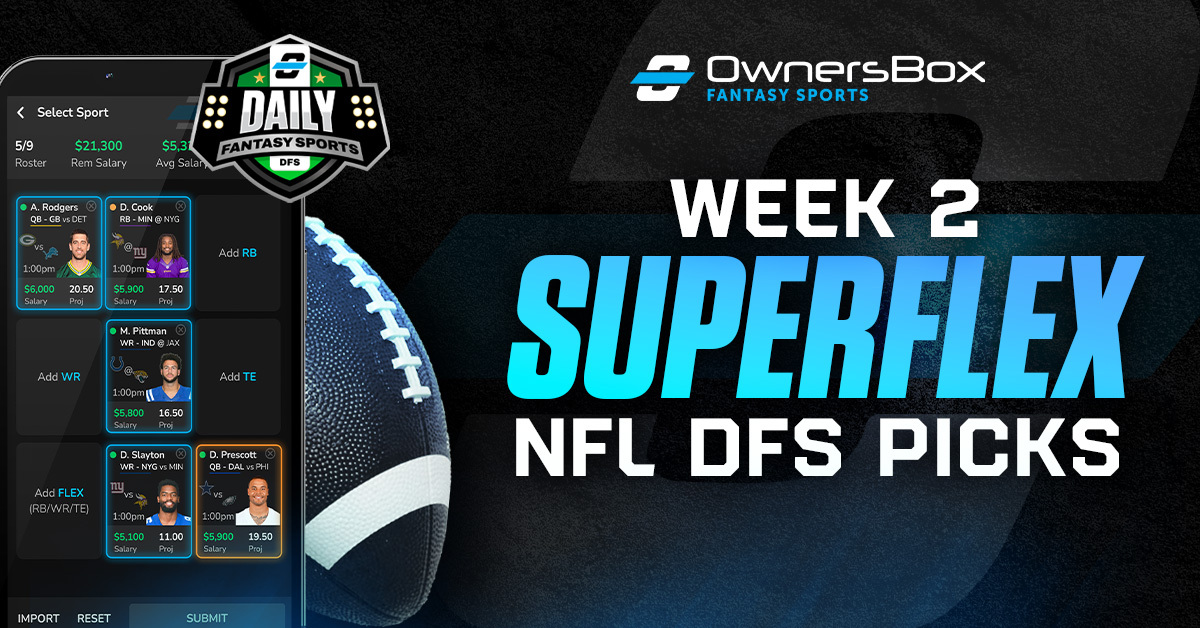 The Superflex Position on OwnersBox is without a doubt the most crucial decision-making point in your lineup construction. Whether or not you decide on playing a second quarterback or a value position player, options will always be plentiful. I have had a lot of success in the past playing multiple QBs, but as we saw in the 100K Sunday Smash last week, the winner did NOT have a Quarterback in his NFL DFS Superflex lineup, but rather a low-owned RB.

Let’s take a look at some potential routes to go for your NFL DFS Superflex contests in Week 2.

The Dolphins are off to a 1-0 start, largely in part thanks to the Patriots offering close to nothing on offense. Tua didn’t need to do much last week but looked decent enough to take a shot on here against Baltimore.

The Dolphins were right in the middle of the pack, throwing the ball at a 61% clip in Week 1, and that was with a commanding lead most of the game. Look for the Dolphins, a 3.5-point road underdog, to throw the ball, even more, this week in Baltimore, leading to a lot of opportunity for Tua, Hill, and Waddle.

There’s no way around it, this one is a bit gross. It’s not comforting to click Geno Smith’s name in NFL DFS in the year 2022, but here we are.

With that being said, I will have some Geno exposure in my OwnersBox lineups this upcoming week. The $6,100 price tag is cheap enough to warrant taking a shot on him after a promising Week 1 showing on the road against Denver. While I don’t expect Geno to be a pro-bowl talent week in and week out, the price tag he (and Tua) carry allows you to jam in the higher-priced RBs and WRs we want, creating maximum upside.

I expect Geno to be well under 10% owned, potentially under 5%, so it won’t take much to get over the field on Geno this week. There is a decent level of risk here, but if you can stomach clicking the name, don’t be afraid to roll out some Geno Smith at low ownership in Week 2.

Alas, we arrive at the Allen Robinson bounceback spot. Cooper Kupp had a huge night on Thursday against the Bills, but the same can’t be said for A-Rob. A disappointing debut for the Rams would be an understatement, as he was only able to corral one reception for a measly 12 yards on the night.

However, he did play 65 of the team’s 67 snaps, running 48 routes. He drew TWO targets for an abysmal 5.1% target share in what I believe was an extreme outlier.

The Week 2 $100k contest is live… Are you our next big winner? ⬇️https://t.co/i8xJm7S7IO pic.twitter.com/ZDqfwRLY0N

Fear not, as we have a great opportunity to take advantage of a beautiful bounce back spot for Robinson. Look for Matthew Stafford to get Robinson involved early and often in this one, as the Rams host Atlanta as 10+ point favorites in the NFL odds this week. I am expecting the Rams to use this game as a way to get Robinson comfortable in the offense without too much pressure being on him.

I won’t be “all in” here, but I do plan on deploying a fair amount of Allen Robinson shares this week, as this spot couldn’t get much better for a nice flop-lag after he let everyone down in Week 1. Be sure to make Robinson one of your NFL DFS wide receiver picks in a few contests.