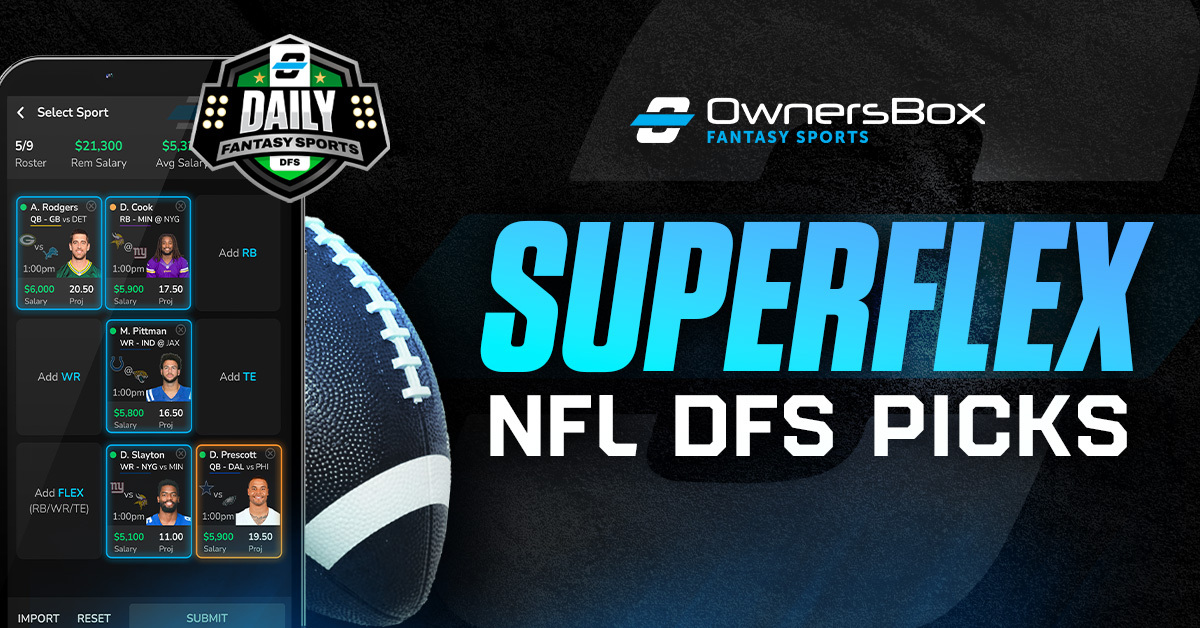 The NFL DFS SuperFlex position is always a tricky one to navigate because there are so many options. Targeting QBs can be one direction to go, however, finding a well-priced RB and WR is another option as well. Here are three NFL SuperFlex DFS options to use in all your OwnersBox entries for Week 1.

Trey Lance only got a few starts last year, but as the season went on his production increased. In Week 17, Lance finished as the QB10 in fantasy with 250 passing yards, two touchdowns, and 31 rush yards in a win over the Texans.

Texans had the worst PFF coverage grade last year, but he barely used his legs. However, this goes to show he can produce against bad secondaries. The Bears had a 57.5 PFF coverage grade, which was 23rd in the league. They head into the new NFL season with the 31st ranked secondary, so this defense is in the dumps especially without edge rusher Khalil Mack.

The second-year signal caller averaged 53.7 rushing yards per game last season, and he scored at least 22 Fantasy points in two of those games.

Matt Eberflus is implementing a new defensive scheme, which could mean there will be some miscommunications and rust to work through. Aiyuk had four catches for 96 yards in Week 17, so a stack with him and Lance could work well in fantasy football lineups this week.

I know, ya’ll think I’m crazy for backing Carson Wentz, a perennial choker. However, the Washington Commanders face the worst secondary from 2021 in the Jacksonville Jaguars, and he’s the 15th most expensive QB in NFL DFS SuperFlex contests at OwnersBox.

Even though everyone thinks Wentz hindered the Colts’ offense in 2021, he still managed to finish as the QB10 or better six separate times. His best finish actually came against the Bucs in Week 12 where he finished as the QB3. Tampa Bay boasted a solid secondary last year, so I feel like he could have a big game at home against the Jags.

And he was ELITE at getting open in college:

Dotson was Top-5 in targets in 2021 & is reportedly Carson Wentz favorite WR.

Wentz has played three career NFL games against the Jags throwing for 651 total yards, four touchdowns, and two interceptions. Jahan Dotson has been classified as Wentz’s favorite target throughout camp and preseason. He could be an interesting sleeper pick at $4,600 in OwnersBox SuperFlex DFS contests in Week 1.

With DeAndre Hopkins missing six games due to suspension, I think Marquise Brown at $5,800 in NFL SuperFlex DFS contests is highway robbery.

Hopkins commanded a 25% target share or mote five times last season. With Brown as the new WR1, there’s no reason he shouldn’t see this kind of production in Week 1.

The Chiefs’ defense is going to be a lot worse than what they fielded last year. Kansas City lost safety Tyrann Mathieu and cornerback Charvarius Ward to free agency. The only work they did to replace these guys was through the draft, so relying on rookies to be competitive in Week 1 usually isn’t smart.

L’Jarius Sneed will probably be tasked to cover Marquise Brown. He posted a 62.4 PFF coverage grade and allowed four touchdowns with a 72% catch rate. Brown’s speed and route running ability should be able to get him big points in what should be an offensive shootout.