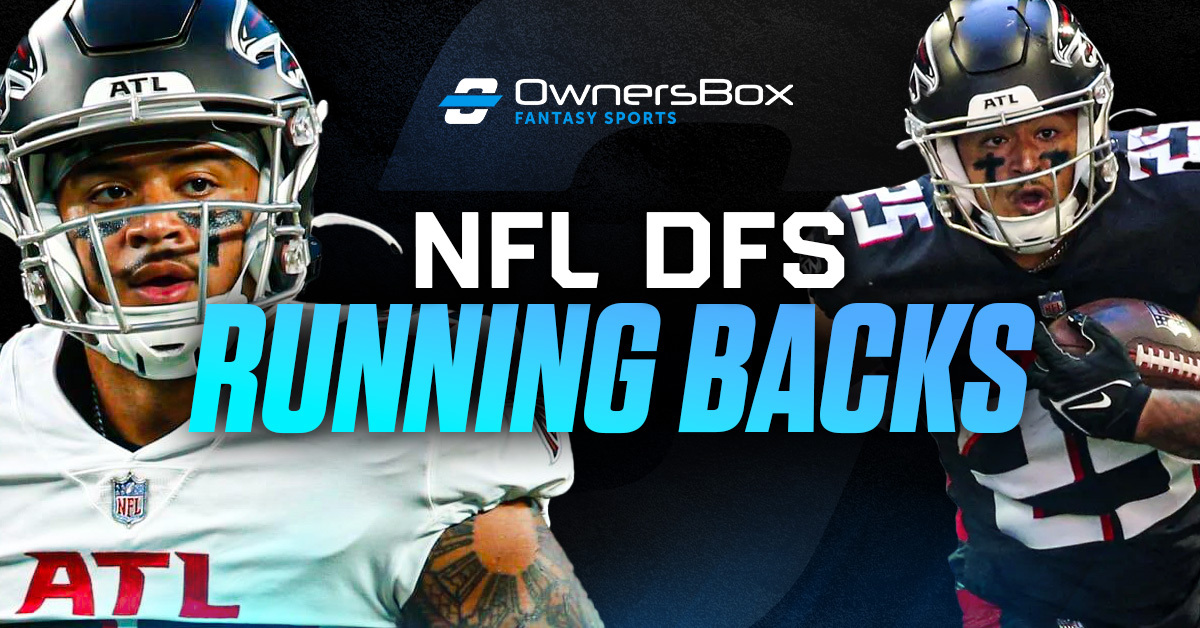 Welcome to Week 5 NFL DFS at OwnersBox! We will be looking into a fairly thin running back pool this week, at first glance, there is not a whole lot to get excited about. Nevertheless, we will be looking for three running backs to jam into your OwnersBox lineups in Week 5, so let’s dive right into this week’s plays.

New users who sign-up at OwnersBox before Week 5 can get a deposit match bonus of up to $500. Not to mention, users can get a free entry into any NFL DFS contest, along with one free entry into the brand new Lightning Lineups fantasy game. This is one of the best fantasy sports promos available across all markets.

OwnersBox is the only place to play DFS in Ontario, so be sure to lock in your lineups North of the Border below!

Falcons starting RB Cordarrelle Patterson is down for at least four games with a knee injury, thus opening the door of opportunity for rookie RB Tyler Allgeier. When Patterson went down last week, we saw Allgeier and third string RB Caleb Huntley both carry the ball 10 times.

Patterson enjoyed 55% of the snaps prior to going down, and afterward, we saw Allgeier take 25% of snaps and Huntley take 12%. This isn’t much of a sample size, but we can pretty safely assume here that Allgeier is going to see RB1 duties on Sunday against Tampa Bay.

Tyler Allgeier could be next up. pic.twitter.com/YQrn2aX4zY

Now here lies the problem. The matchup is sub-par at best with a stout Tampa Bay defense. There is a world where the Falcons get completely dusted on Sunday and none of their players produce to the level we want fantasy wise.

However, at the $4,700 price tag on OwnersBox, we need to find a way to save salary and jam in our higher-priced QBs and WRs, so taking a shot on Allgeier and his expected volume is a viable route this week.

Let’s hope the Falcons can be competitive in this game so Allgeier can bring us to the top of the leaderboard this Sunday as one of our top NFL DFS running backs.

This is a spot that is basically the dire opposite of the Falcons’ spot against Tampa Bay, where the matchup is less than ideal. Here, the matchup is all we could ever ask for, and I have a feeling that Rhamondre will dominate the Lions’ defense that is in complete and utter shambles.

Through four games, the Lions have allowed 662 yards rushing (3rd worst) and an absolutely dreadful 5.6 yards per carry (dead last). It goes without saying that this defense is a complete mess, and Stevenson finds himself in a great situation this week. The Patriots appear to be on their third-string QB, as Mac Jones is down for the counts, while Brian Hoyer is banged up with a concussion as well.

He has 10 targets in the last 2 weeks

Look for the Patriots to pound the ball on the ground and try to remove as much responsibility from third-string QB Bailey Zappe.  Although we do need to worry about Damien Harris being the one who racks up the touchdowns, the opportunity for Rhamondre is quite frankly too good to pass on in a week where RB talent and value is few and far between.

He checks both boxes, so I will be rolling with quite a bit of Rhamondre this week. As a side note, don’t be scared to play Damien Harris in lineups where you don’t have Stevenson. I won’t be pairing them together, but I’ll try to have one or the other in a majority of my teams on Sunday as one of my NFL DFS running backs.

In the three hole this week is Dameon Pierce, a potential ROY candidate early on in this 2022 campaign for the only winless team that remains in the NFL, the Houston Texans.

Pierce has been their bright spot, and they are giving him a full opportunity to be their “premier” running back, with Rex Burkhead taking a clear back seat while Pierce has carried the load in the last two weeks, racking up 34 carries for 211 yards and 2 TD’s, while also tacking on 8 receptions in those two games.

Dameon Pierce this season (among rookies):

Like, I have mentioned throughout this article, the running back value is really thin this week, which is why Pierce will be towards the top of my list. The matchup is once again nothing to die for, as we see Jacksonville in the top third of the league in rushing YPG allowed (94), and rushing YPC allowed (3.6).

While this isn’t looking good for Pierce, the volume and opportunity he will get on Sunday cannot be ignored in a week where RB value lacks. For that reason, I’ll have Pierce featured in a fairly high percentage of my teams this week. Good luck in NFL DFS Week 5!