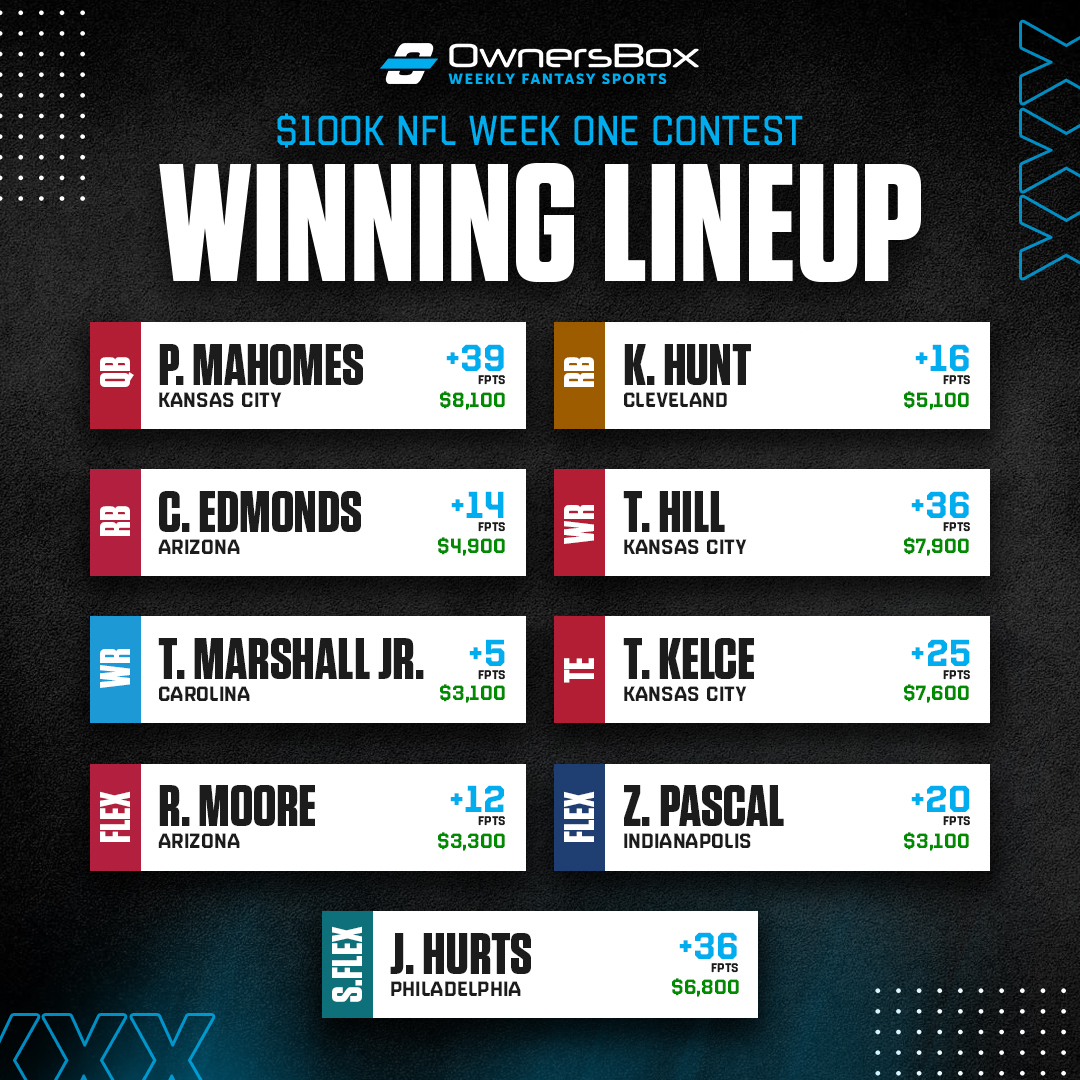 Here is the lineup that won the $15,000 grand prize in the $100k SuperFlex Salary Cap Contest! 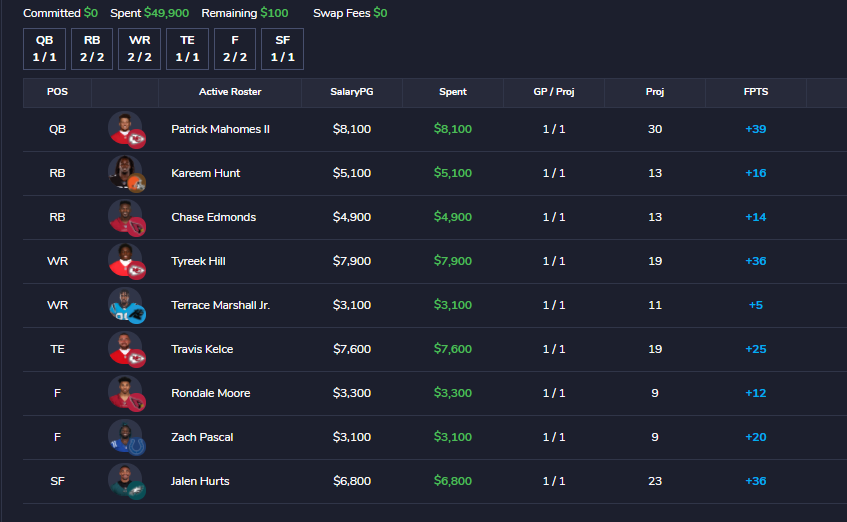 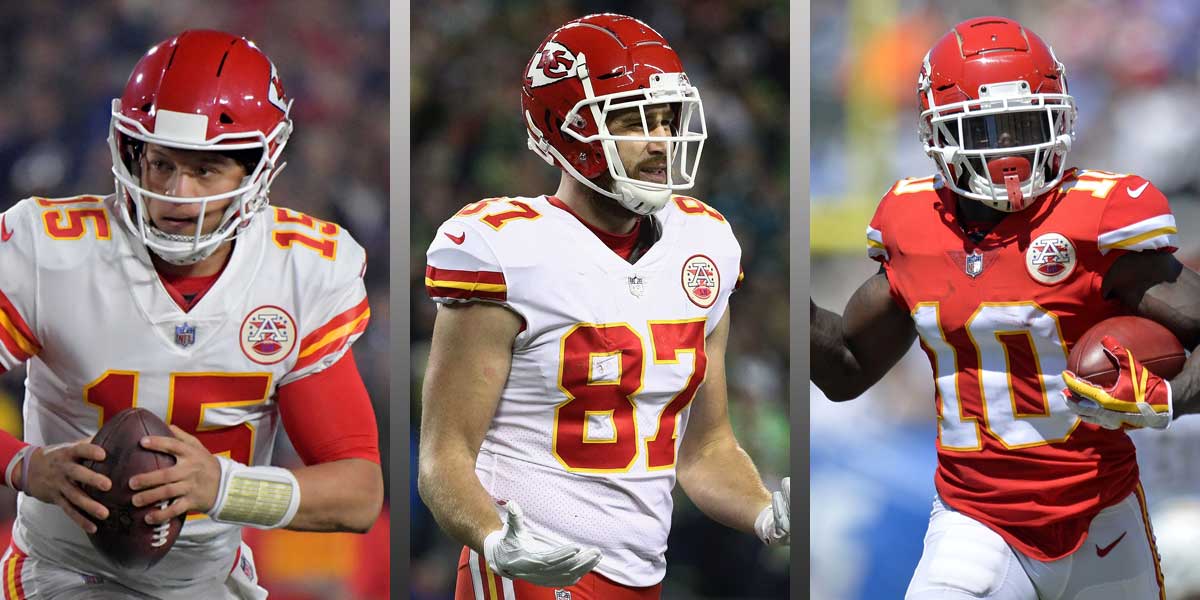 This $15,000 grand prize winning lineup for the OwnersBox NFL Week 1 contest featured an intersection of many intriguing strategies. The lineup is centered around a super stack of Kansas City quarterback Patrick Mahomes with two Kansas City pass catchers in wide receiver Tyreek Hill and tight end Travis Kelce, for a total salary of $23,600 out of the $50,000 salary cap allocating to the three Chiefs superstars. Laying down nearly 50% of the salary available on three players made the rest of the lineup a frugal spend, but also the three stars combined for 100 fantasy points so they were worth the high salaries. 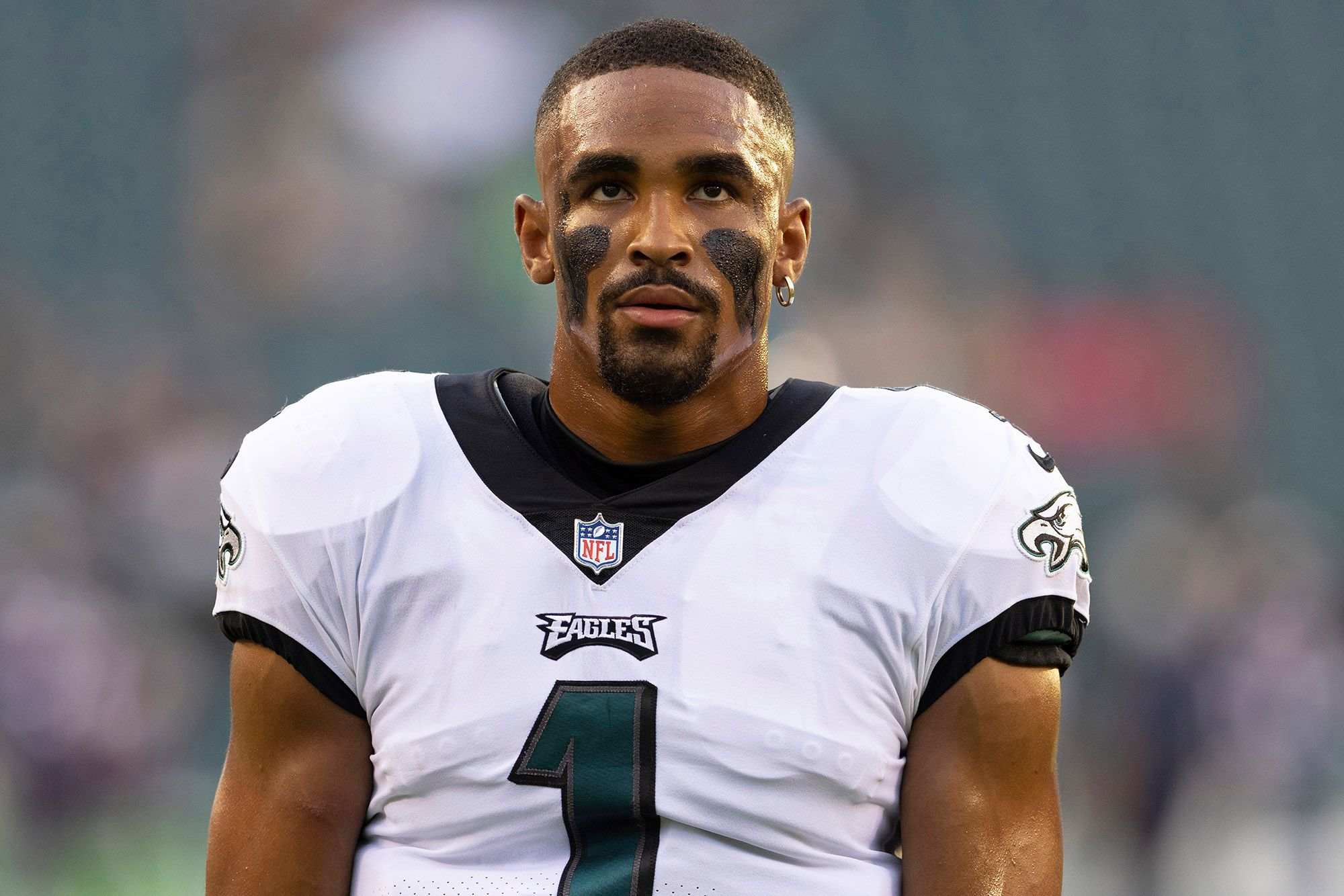 The winning lineup features Eagles’  Jalen Hurts in the SuperFlex position. Jalen Hurts had a fantastic matchup against a very weak Falcons defense and was able to cash in to the tune of 36 fantasy points after throwing for two touchdowns and rushing for 62 yards in an Eagles blowout victory over the Falcons. Hurts was smart pick for a the SuperFlex spot since quarterbacks receive 6 points for passing touchdowns and that Hurts has a high rushing floor that was demonstrated in this Week 1 matchup. Hurts could have gone for even more points had he found the end zone with his legs. The winning user was smart to place a mid-priced quarterback with rushing upside and an excellent matchup into the SuperFlex position, and it led to success. 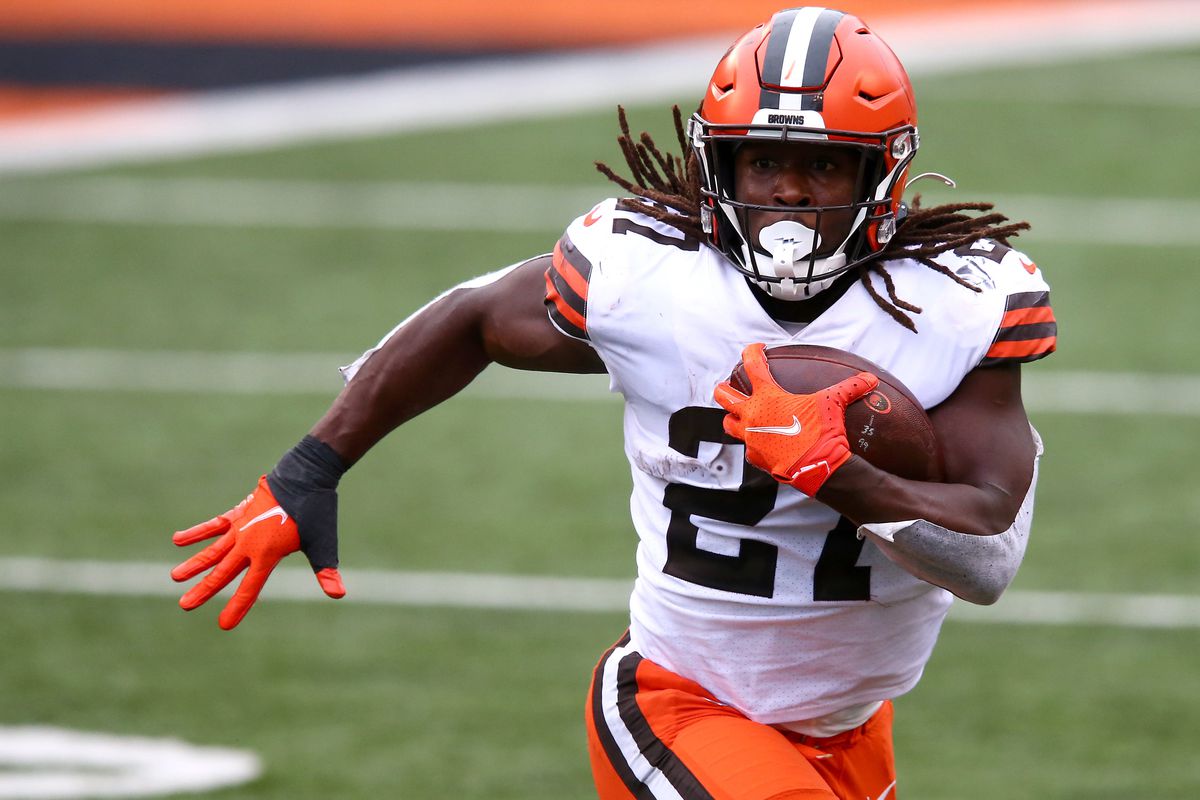 This lineup featured two discount options at running back that simply met their projection in the Cleveland Browns’ running back Kareem Hunt and Arizona Cardinals’ running back Chase Edmonds. Both running backs feature a high floor as pass catching specialists, but both back also retain a rushing role in their respective offenses.

While Hunt saw only 9 touches, the touchdown and two-point conversion salvaged his fantasy day, and Edmonds was able to create points without a touchdown. Moving forward, both these backs should continue to turn limited touches into fantasy points, and employing a mid-to-low cost strategy at running back is a great strategy at maximizing the ceiling of your OwnersBox salary cap lineups. While these two running backs didn’t win the contest for the lineup, they didn’t lose it either. 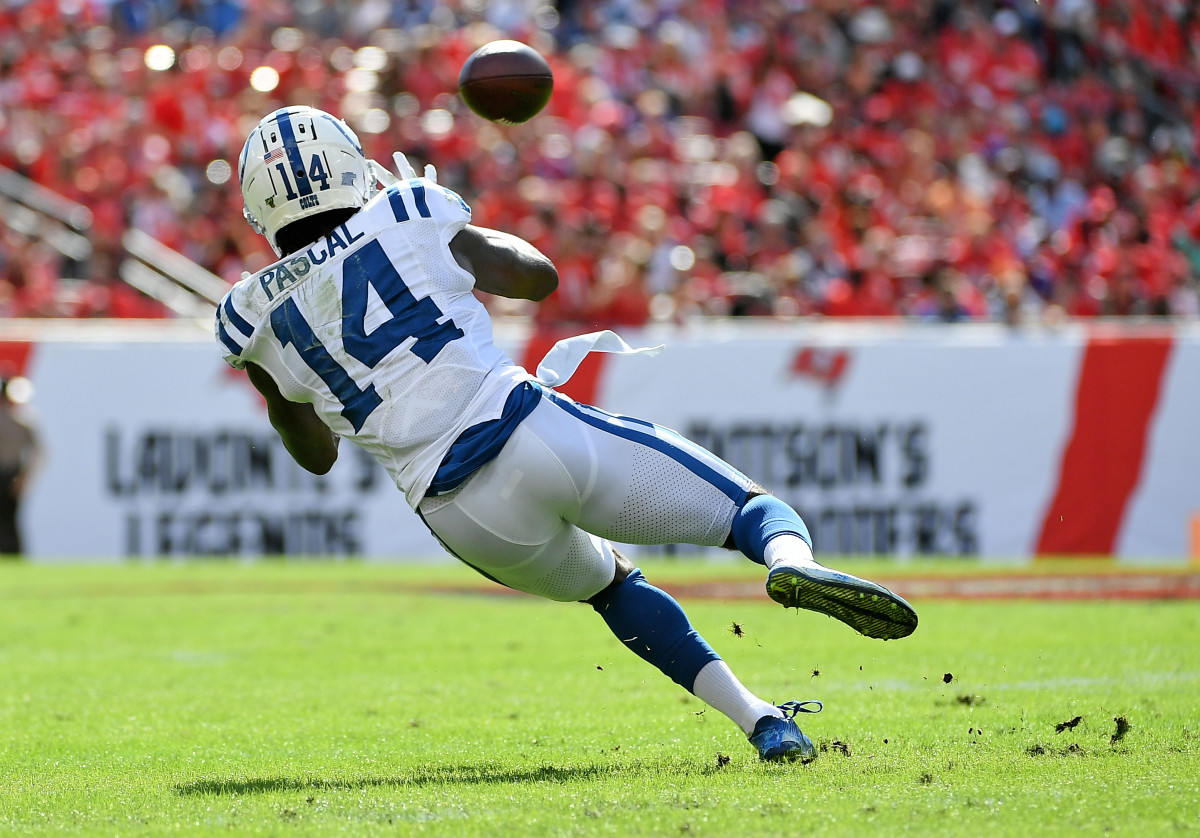 This is where this lineup was able to separate from the pack and claim the $15,000 grand prize. These three low cost dart throws combined for less than $10,000 in salary and contributed the 37 fantasy points that put this lineup over the edge for the top spot. Zach Pascal was able to emerge from the Colts wide receiver room to score two touchdowns from a nearly minimum salary, and rookie wide receiver Rondale Moore turned out 4 catches for 68 yards and chipped in return yards that count for fantasy points on OwnersBox. If you’re going to employ this “stars and scrubs” strategy where you start superstars like Mahomes, Kelce, Hill, you need to be able to find value with the players that are listed near minimum salary, and get a little bit lucky in terms of touchdowns, i.e. Zach Pascal!