Austin Ekeler WILL win you your league in 2021

After the departure of Melvin Gordon in 2020, Austin Ekeler was deservedly receiving a lot of hype. He was poised to take over that backfield and have a true workhorse role. Unfortunately, an injury in week 4 quickly derailed his efforts to build off an incredible 2019 season. Everything seems to be lining up for Ekeler to finish what he started last season, and be the league winning running back I expect him to be. 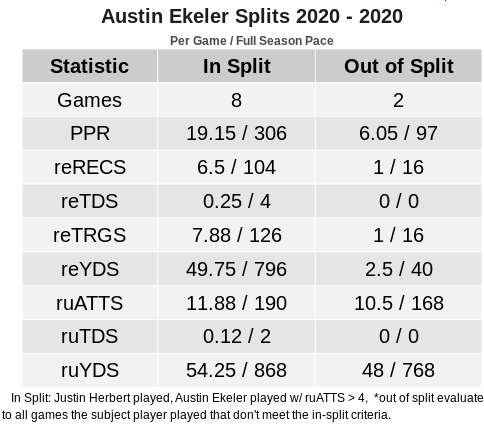 Despite suffering a grade 2 hamstring injury and missing almost 7 full games, Ekeler looked very good last season. As you can see by the splits, in the 8 games Ekeler played with Herbert (excluding the one he got injured), he was absolutely dominant. He averaged over 19 PPR fantasy points per game, with a 16 game pace of 294 touches, including 104 receptions, 1664 totals yards and 6 TDs. Yes, you read that correctly, Ekeler had a 16 game pace of 126 targets and 104 receptions with Herbert last season, beating his incredible 2019 mark of 92 receptions. That would be the 3rd highest mark of all time, only losing to McCaffrey in 2018 and 2019. Considering he had 993 yards from those 92 receptions in 2019, it isn’t unreasonable to think Ekeler has 1000 receiving yard upside.

Despite some incredible 16 game yard and reception paces, Ekeler was quite lacking in the touchdown department, something that’s essential for a league winning running back. There’s still a lot of question marks regarding who the goal line back will be in LA this season. This is how the 20 carries inside the 5 were divvied in 2020: Herbert: 7 Ballage: 6 Kelley: 5 Ekeler: 2 Jackson: 0. Ballage is no longer on the team and Kelley looked like shit last season, so I fully expect there to be a new main goal line back. Herbert as a big bodied QB will obviously take some of that, but Jackson clearly isn’t seen a goal line guy by that team.

The only potential RB threat I see to Ekeler on the goal line is the newly acquired Larry Rountree. He proved to be a very strong goal line option in college, scoring 14 touchdowns in his final season last year. However, he is only a 6th round pick, so he’d really have to prove himself to take that role full time.

Improvements to the Offensive Line

The Chargers had one of the worst run blocking offensive lines in 2020, ranking 4th last in Football Outsiders adjusted line yards. However, things are looking a lot better up front in 2021. They almost entirely revamped the offensive line, with just 1 returning player, Bryan Bulaga (who hasn’t even played much for them anyway). The biggest addition was All-Pro center, Corey Linsley signing a massive 5 year, $62.5 million dollar contract, a key piece to this new look line.

They then brought in Oday Aboushi, an underrated journeyman guard, ranking 26th out of 92 qualifying guards in 2020, and Matt Feiler from the Steelers, another above average lineman. To finish off this impressive revamp, the Chargers used their first round pick on tackle Rashawn Slater. Slater was a consensus top 2 offensive lineman in the 2021 draft and is expected to be an immediate starter who can both pass block and run block at a high level. Obviously with all these new pieces to the line, they’re going to need to gain some chemistry first, but this line has top 10 potential.

It doesn’t end there. The Chargers made quite a few changes to their coaching staff this offseason, finally giving Anthony Lynn the boot and replacing their OC Shane Steichen as well. Brandon Staley is coming in as the new head coach, however being a defensive minded HC, the OC is expected to make most of the offensive decisions. The man for that job is former Saints QB coach, Joe Lombardi.

I fully expect Lombardi to implement a pass first offense in LA, which actually could be a good thing for Ekeler. Look at who he was working with in New Orleans, I don’t see why he wouldn’t use Ekeler in a similar role as Kamara. Maybe not a workhorse role, but plenty of goal line touches and passing down work.

Everything they’re doing this offseason is pointing towards a massive season for one of the most efficient backs there is in Ekeler. I’m absolutely loving the value you can get on him right now as he’s still only being taken in the 2nd round. There’s no one I trust more outside of the top 3 RBs to finish as a league winner for your team in 2021.