5 Runnings Backs You Need in Your Week 7 Lineup 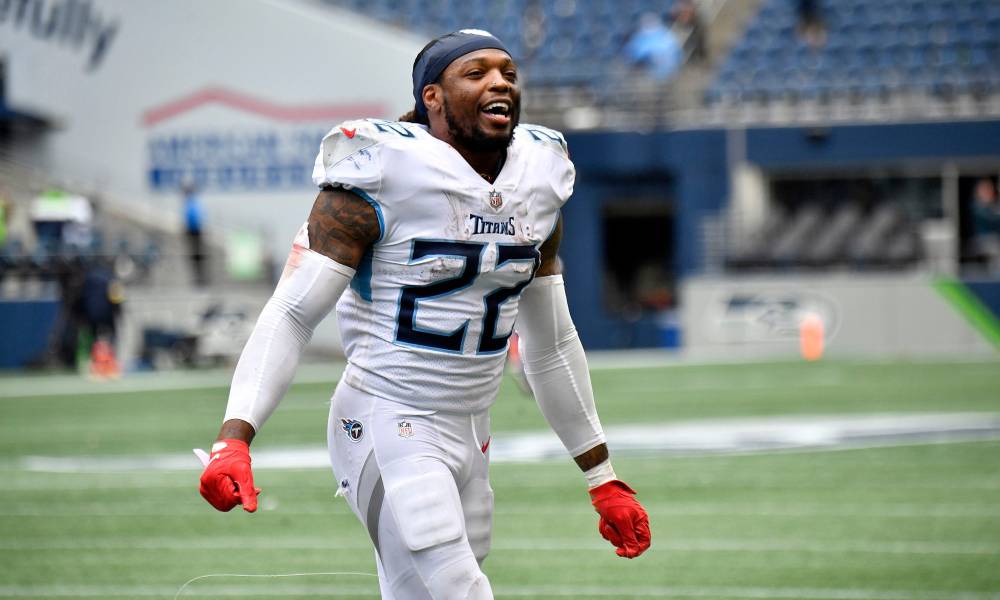 5 Runnings Backs You Need in Your Lineup

While so much of the focus in a SuperFlex lineup is on the dual quarterback option, we cannot forget the value of finding a key running back. Sometimes, it’s in the form of a backup pushed into a starting role. Other times, it’s in paying a premium for chalk that is in position to thrive — chalk can be chalk for a reason.

Whether it’s the starting point or just another requirement along the way to fill out a lineup, running backs of all shapes, sizes, and salaries need to make our short list. Here are the five that lead the way for Week 7.

Derrick Henry – TEN $8,100 vs. KC – How can we not start with Derrick Henry? Did you see what he did to the Bills on national television? Of course you did. Everyone did. The local police were probably made aware of the dangerous situation that is Henry barreling through another defense.

That was the Bills, who had been one of the best teams against the run this season.

Now, Henry gets to take aim at one of the worst defenses in the league in the Kansas City Chiefs. They are allowing the third-most yards-per-carry to date. 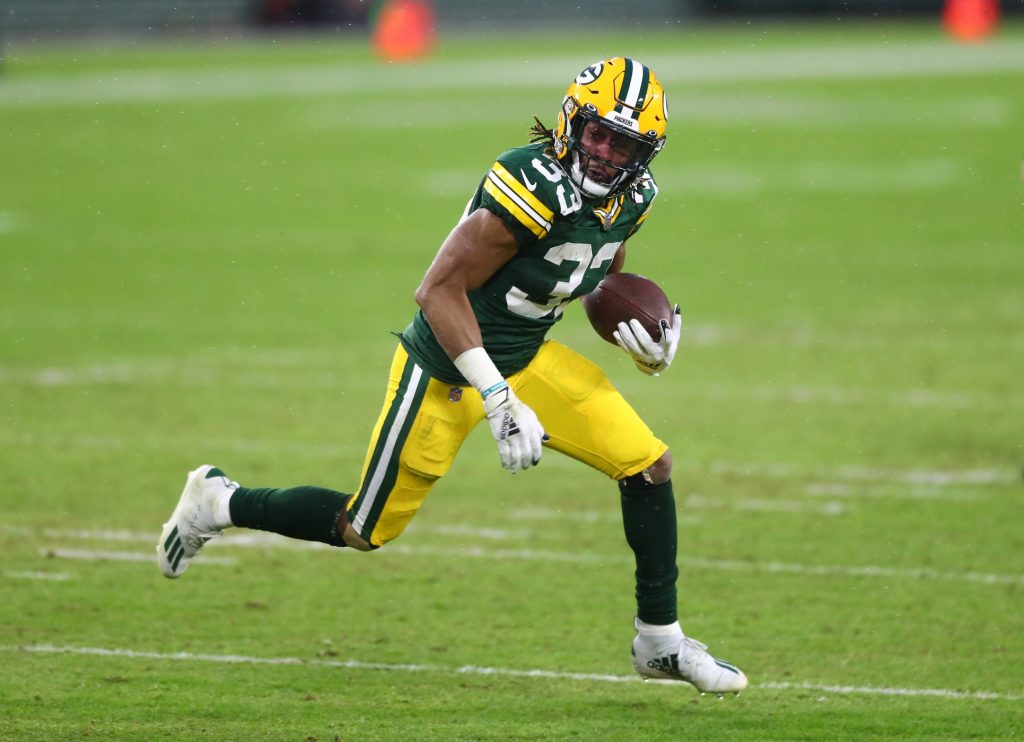 Aaron Jones – GB $6,900 vs. WFT – I’m all for paying up when a player warrants the premium, but it’s hard to ignore the immediate savings if we were to pivot from the aforementioned Henry to Aaron Jones. Jones is the third-most expensive running back on the slate, and he carries more than $1,000 of salary relief. He also has just as high of a ceiling.

Jones already has six touchdowns through six games, but four of them came from one matchup. It’s unlikely we get that same production anytime soon from anyone, but Jones has an excellent matchup and game script on Sunday against the Washington Football Team.

Washington just gave up 31 points for the fourth consecutive game and now ranks worst in the league in points allowed. The Green Bay Packers have scored at least 24 points all-but-once this year — Opening Day’s nightmare against the Saints — and they have won two-of-their-last-three games by double-digits. This sets up nicely for Jones to carry the ball late in the game and the Packers try to milk the clock and preserve a lead.

Darrell Henderson – LAR $6,300 vs. DET – If I wrote the words “milk the clock and preserve a lead” for the Packers against Washington, then I must repeat it for Darrell Henderson against the Detroit Lions.

The Los Angeles Rams might step onto the field with the lead. This immediately gives the running game a boost as Los Angeles has the perfect game script for a rushing attach. In prior years, that would have caused concern as to which Rams running back would lead the way, but Henderson has outpaced all of his competition so far. He has led the team in carries in each game for which he was active, and he reached a season-high 21 rush attempts last week against the Giants in an easy win. Why should this week’s game go any differently? 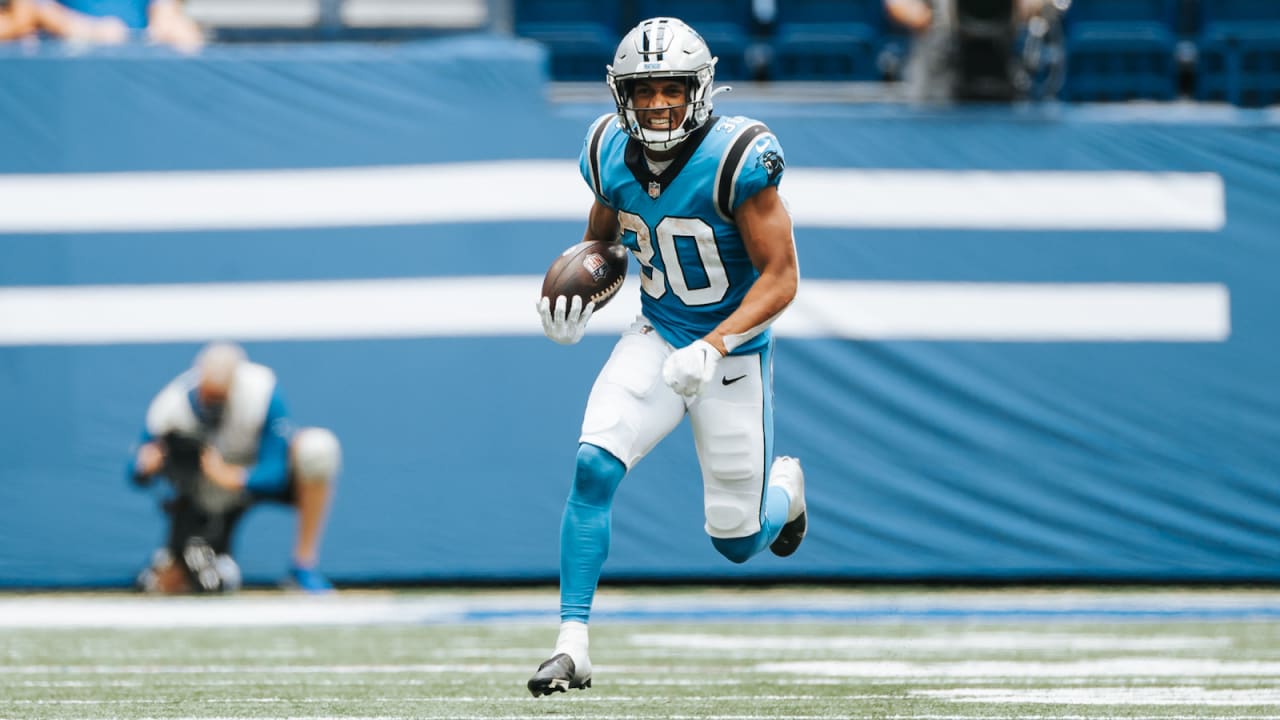 Chuba Hubbard – CAR $5,700 at NYG – I just referenced the New York Giants’ last game in which they were knocked out so early that the opposing running back had plenty of time to accumulate fantasy points through column alone. The Carolina Panthers don’t have as perfect a setup simply be virtue of their offense being less explosive, but that’s likely why Chuba Hubbard’s salary is so reasonable.

Hubbard is a low-risk-high-reward player who is continually being asked to step into the role of superstar Christian McCaffrey. Of course, Hubbard won’t be him, but the Panthers don’t shy away from funneling volume through the position, and Hubbard should continue to get his chances.

It also helps that the Giants are allowing the fourth-most rush-yards-per-game, where this could be the matchup Hubbard needs to finally explode.

J.D. McKissic – WFT $4,800 at GB – J.D. McKissic might be the easiest plug-and-play of the weekend if starter Antonio Gibson can’t start due to his injured shin. Granted, the matchup against the Green Bay Packers is far from ideal — the defense has allowed the eighth-fewest rushing touchdowns — but McKissic’s value isn’t directly from the numbers. It’s in the game flow expected from said matchup.

As I wrote in Aaron Jones’ blurb, the Packers are in position to take control of their game against Washington. If that happens, not only will Green Bay run, but Washington will be forced to throw. And that’s where we want to target McKissic. Really, it’s to the point where McKissic is in-play even if Gibson were to start.

Simply put, McKissic should be on all WFS players’ short list with him moving into a must-start position based on Gibson’s status.