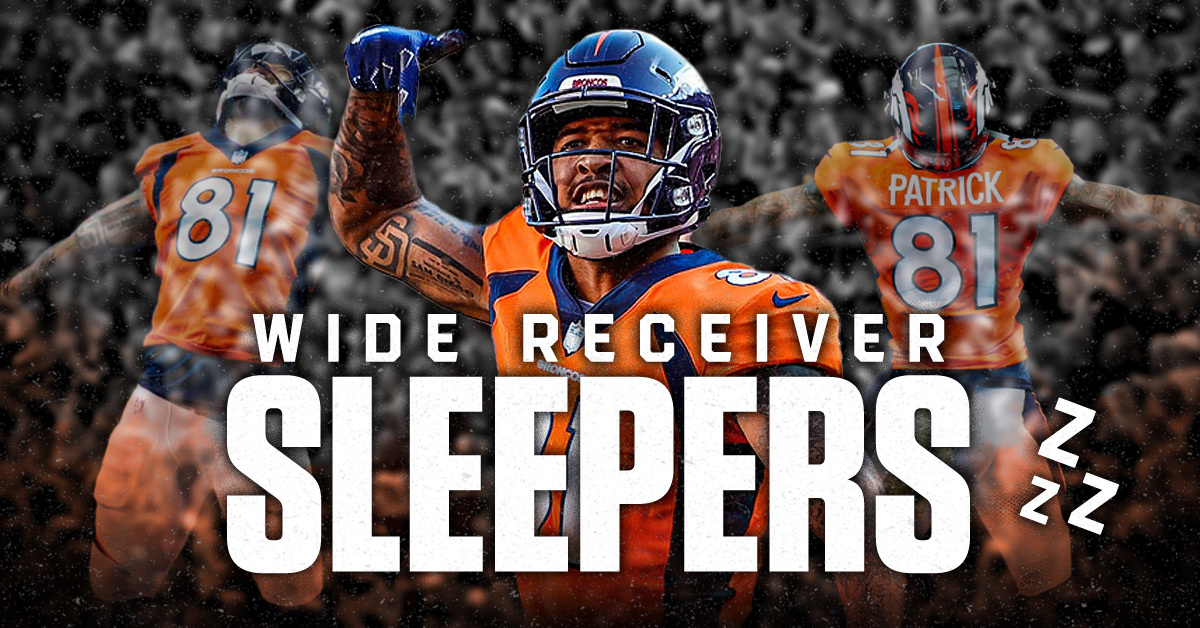 No fantasy football draft can be complete without the later rounds and your highly touted “sleeper picks”. There can be plenty of value beyond the first 10 rounds of your draft. It was on display last season with Mike Williams, Michael Pittman, and Hunter Renfrow. So in this article we’ll look at 4 players that could replicate those wide receiver sleepers from last season.

The best fantasy football draft strategy has to include some risky, high upside players combined with safe, high floor receivers. This isn’t just available in the early rounds, there are players of both ilk’s available in the later rounds.

Tim Patrick fits the description as a sleeper wide receiver that can provide fantasy managers with a high floor. He’s the clear WR3 on the Broncos depth chart but that doesn’t mean he doesn’t have value. An injury to either of Jerry Jeudy or Courtland Sutton would immediately make his draft capital worth it but that’s not the only reason I’m drafting him in the 13th round.

Patrick ran, and will continue to run, more than 70% of his routes out wide, he’s been doing it for the last 3 seasons in Denver. He’s also eclipsed 50 receptions and 730 yards in back-to-back seasons, despite quarterback play from Drew Lock and Teddy Bridgewater. Now Russell Wilson takes the keys at quarterback and Nathaniel Hackett will be calling plays.

Although Wilson has never elevated three pass catchers to fantasy relevance, he now won’t have to deal with Pete Carroll and his obsession for running the football. This could be one of the most pass heavy offenses of Wilson’s career. Patrick being an option on the outside for a quarterback who attempted passes of 20+ yards on 18.8% of his attempts is a dream scenario for a fantasy football sleeper.

Jarvis Landry has to be one of the most overlooked players in 2022 fantasy football, but that’s something he’s used to. Every season Landry has played 12+ games he’s finished no worse than a WR3, including three WR1 finishes. He has an excellent floor in PPR formats but in this Saints offense he can provide upside. Especially considering the uncertainty surrounding Michael Thomas.

The Saints offense was a shell of what it could have been last season, throwing the ball on just 51.5% of plays. That came down to the early season injury to Jameis Winston and the ragtag group of receiving weapons at their disposal. Now the cupboard is stocked with Landry, Thomas and first-round pick Chris Olave.

New Orleans should be much more comfortable throwing the ball this season and with a potential suspension coming for Alvin Kamara it may be a necessity. 13.7% of Jameis WInston’s passing attempts were for 20+ yards (7th in the NFL), so even if he’s not chucking it around at quite the degree he was in Tampa Bay there is still valuable targets for Landry to snatch up.

All the talk this offseason has gone towards Gabriel Davis and that’s no surprise considering how he finished the year. Highlighted by an 8 reception, 201 YDs and 4 TDs performance in the AFC Divisional Round. But his ADP in the 6th round has him as a must avoid wide receiver for me, considering that he hasn’t eclipsed 35 receptions in a season his entire career.

Let me introduce you to Isaiah McKenzie, who you can take a flyer on with your last pick in fantasy football drafts. He could be someone you end up dropping after week 1 or he puts his freaky athleticism and speed on display and does what everyone thinks Gabriel Davis will do.

McKenzie will be running the vast majority of his routes from the slot this season, and he’ll be in competition for those routes with 29 year-old Jamison Crowder. The slot wide receiver in the Bills offense has proven to be the second most efficient option in the offense, Cole Beasley posted 750+ yards in three straight seasons.

As reliable of a target as Crowder has proven to be in his career, McKenzie does have an establish rapport with Josh Allen. Like Davis he hasn’t proven himself to be an impactful fantasy asset but he gives you a chance to invest in the Bills offense without having to significantly overpay for it.

The entire Cincinnati Bengals offense could end up being a fantasy goldmine this season. We could see a similar output to the one that the Tampa Bay Buccaneers had in 2021. Boyd is firmly the third wide receiver on the depth chart, but the departure of CJ Uzomah over the middle of the field could open up more production.

Cincinnati ran 3-wide sets at the second highest rate in the NFL, a 77% clip, this is also known as 11 personnel. This was done with one of the worst offensive lines in the NFL, with the improvements they’ve made in the off-season we could see them rivaling the Rams 86% rate from last season.

Boyd’s 18.9% target rate is certainly modest but his 67 receptions ranks 31st amongst wider receivers. With Ja’Marr Chase and Tee Higgins taking so much attention from opposing offenses Boyd was able to average 1.95 yards of separation per target, which ranked 8th at the position. If he stays healthy I can guarantee you he will outperform his WR52 label as he’s been WR31 or better in 4 straight seasons.