3 Wide Receivers to Start in NFL DFS Lineups on OwnersBox 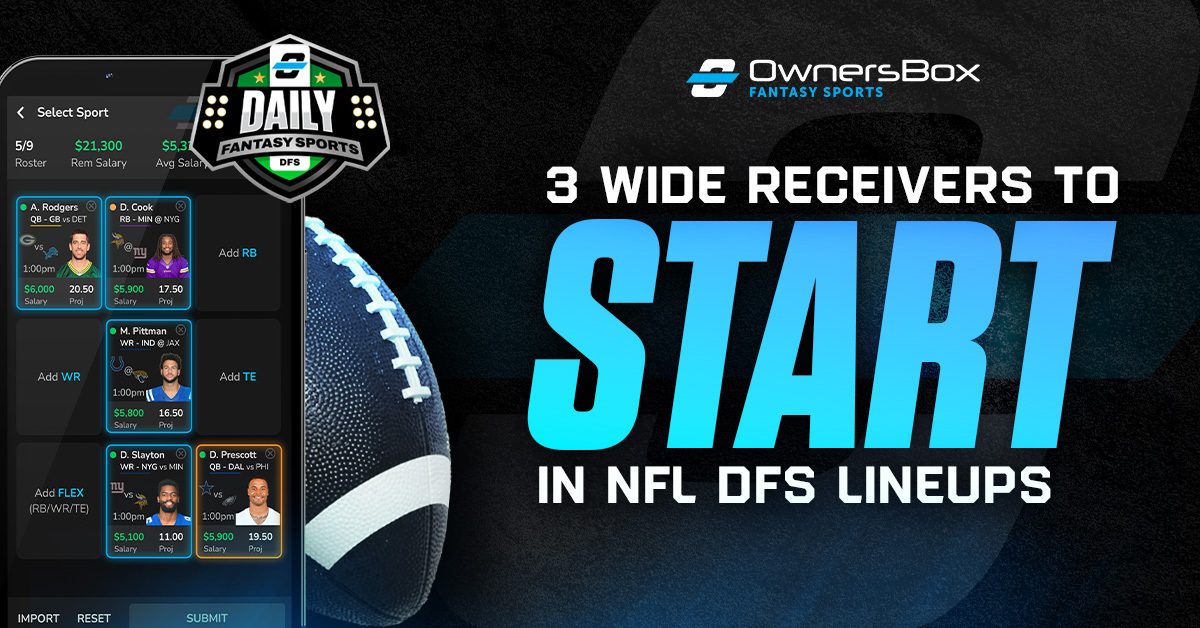 We’ve made it, it’s time to start building your DFS lineups for the first week of the 2022 NFL season! OwnersBox is kicking things off with their $100K Sunday Smash NFL DFS contest, with $20,000 going to the winner. We’ll take a look at the player salaries at the wide receiver position and find three of the best values to include in your lineup this week.

The Jaguars are coming off a pedestrian 2021 season offensively, scoring just 14.9 points per game. As a result this team has seen some major overhaul, including head coach Doug Pederson along with Christian Kirk, Travis Etienne, Evan Engram and Zay Jones. Kirk in particular was given a massive $72 million deal this off-season to come to Jacksonville.

It’s no surprise the Jaguars paid up for a slot receiver like Kirk. The former Cardinals wide receiver had a breakout season after moving to the slot, while running 78.6% of his routes from the slot he posted 77 receptions, 984 yards and 5 touchdowns. He now pairs up with Trevor Lawrence who targeted the slot on 41% of his passes last season.

A matchup with the Commanders is a great way to get this new pairing off to a great start. Washington ranked 25th per PFF in coverage with a grade of 50.1 in 2021. The Commanders also allowed 6.5 receptions and 63.7 yards per game to the slot position last season. With Chase Young sidelined for Washington this should give Lawrence a chance to work under a clean pocket more often.

If you’re keeping tabs on the Cardinals offense this week, you’d know that AJ Green is an eye popping option for week 1. We already touched on Christian Kirk’s departure, DeAndre Hopkins is suspended, Chase Edmonds and his 43 receptions are in Miami, Zach Ertz was not practicing as of Thursday and Rondale Moore has a 50-50 chance to play according to Kliff Kingsbury.

We’ve got a really appealing matchup for the Cardinals passing attack this week against the Chiefs. Kansas City lost Charvarius Ward and Tyrann Mathieu in free agency and did little to replace it. Other then adding the undersized Trent McDuffie in the draft. Even with those two available in 2021 the Chiefs were 25th in fantasy points allowed to wide receivers.

Green stands at 6’4, there isn’t a single player in the Chiefs secondary above the height of 6’1. Not only is Green in line for significant volume in this game, he’s likely the best red zone option this team has left. The Chiefs vs Cardinals odds list the game total at 53.5, the highest total on the weekend, implying plenty of touchdowns will be scored. Green is an undervalued player on OwnersBox this week at $4,500.

We’ve been able to save some money with these first two players, so let’s use that to our advantage and throw Mike Evans in the flex spot. I fully expect him to help the winner of the Sunday Smash DFS contest on OwnersBox claim the $20K grand prize. The Bucs are another team with question marks at wide receiver, Chris Godwin seems unlikely to play and Russell Gage has been limited with a hamstring injury.

Their Sunday night matchup with the Cowboys is a juicy one for fantasy managers, especially with Trevon Diggs and Anthony Brown still 1/2 on the depth chart at corner for Dallas. The Cowboys gave up 11.1 yards per pass completion (29th) in 2021, despite Diggs ability to force turnovers he’s also prone to giving up big plays.

Evans has always had a nose for the end zone, scoring 13 and 14 touchdowns in the last two seasons with Brady. What’s kept him from elite fantasy wide receiver status is volume. Well it’s possible is only target competition will be 33 year-old Julio Jones and Scotty Miller on Sunday night. With his outlook he’s a solid SuperFlex option for OwnersBox DFS lineups in week 1.

Click here to sign-up at OwnersBox for a FREE $10 entry into an NFL week 1 contest with fantasy sports promo code ‘DFS10’!