3 Undervalued Players You Need in Your Lineup

It’s no secret that getting the most out of your fantasy money is one of the key components of winning a tournament, and that simply boils down to finding the right value plays. They can explode and carry a lineup to victory as well as allow for room in a roster for higher-priced names. The good news is that, while these players aren’t always the easiest to identify, there are more than enough on a weekly basis for us to comb through and name a few.

The other benefit to using undervalued players — in addition to the obvious of gaining points for a low price — is that the risk is small because it cost so little to gain exposure to said player. If a low-priced asset fails, it likely won’t destroy a lineup.

Low-risk. High-reward. The ultimate dream for any lineup.

QB Justin Fields – CHI $4,900 vs. SF – Justin Fields’ tenure as the starting quarterback of the Chicago Bears has not exactly gone as planned. He has yet to crack a 100 quarterback rating, and he has thrown for over 200 yards just once five starts. Adding difficulty into the mix, he will play against one of the best defenses in the league on Sunday, when the 49ers — who have allowed the sixth-fewest yards-per-game — come to town.

Why the recommendation for our WFS lineups? Because he’s a starting quarterback who is priced below $5,000.

It also helps that he can run.

It almost looks like Fields tried to pace himself in his first few starts — that, or the Bears intentionally limited him — where he ran exactly three times in each of his first three starts. In his latter two, he tallied six and eight, respectively.

Fields is less expensive than many skill position players on Sunday, and he can be used in the SuperFlex slot on OwnersBox. There’s no indication that he will be suddenly benched, so even a performance near the bottom of his range is perfectly acceptable for the low price. 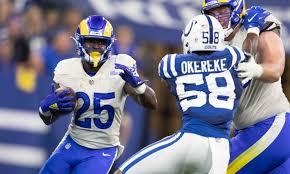 Naturally, we should expect Darrell Henderson, Jr. to carry the workload for the Los Angeles Rams, but the team has an incredibly easy matchup against the Houston Texans — admittedly, nothing is as “easy” as it seems in the National Football League, but this is as good a setup as we can get. The Rams love to run the ball late in games when milking the clock with a lead, and they have no qualms about mixing in Michel.

The risk is obvious in that Michel probably doesn’t get as many carries as any starting running back on Sunday, but he’s undervalued simply by virtue of being next-in-line with an extreme likelihood to get his number called.

WR Amon-Ra St. Brown – DET $3,900 vs. PHI – We’re clearly digging in the bargain bin if we are targeting players like Amon-Ra St. Brown, but such is the nature of this article: to find the players who are undervalued.

St. Brown is undervalued. In fact, he may not be valued at all now that Kalif Raymond saw eight targets and delivered a team-high 115 receiving yards in last week’s game. But before we write off St. Brown, we have to ask, “Which of these is not like the other?”

Sure, I italicized it to give away the answer, but the point is that St. Brown is still on the field at an excellent rate and yet mysteriously vanished in last week’s game. The Detroit Lions will always be throwing — because, presumably, they will always be trailing — and St. Brown is one of the few consistent pieces of an otherwise struggling offense.

He’s basically at the bottom of the price scale, and it’s the perfect time to buy.

Bonus: RB Kenneth Gainwell – PHI $4,800 at DET or Boston Scott – PHI $4,400 at DET – I included both Kenneth Gainwell and Boston Scott because their values on Sunday are directly tied to the health of starting running back Miles Sanders. If he can play, then Scott falls off the list and Gainwell remains. Obviously, if Sanders is out, then Gainwell is a starting running back at less than $5,000 in a game against the winless Detroit Lions.

No further explanation is needed.

If you seek further explanation, then I’ll add that Gainwell is active in the aerial attack with multiple targets in every game this year and as many as eight just a few weeks ago. That was with Sanders in the lineup, who had 47 snaps of his own.