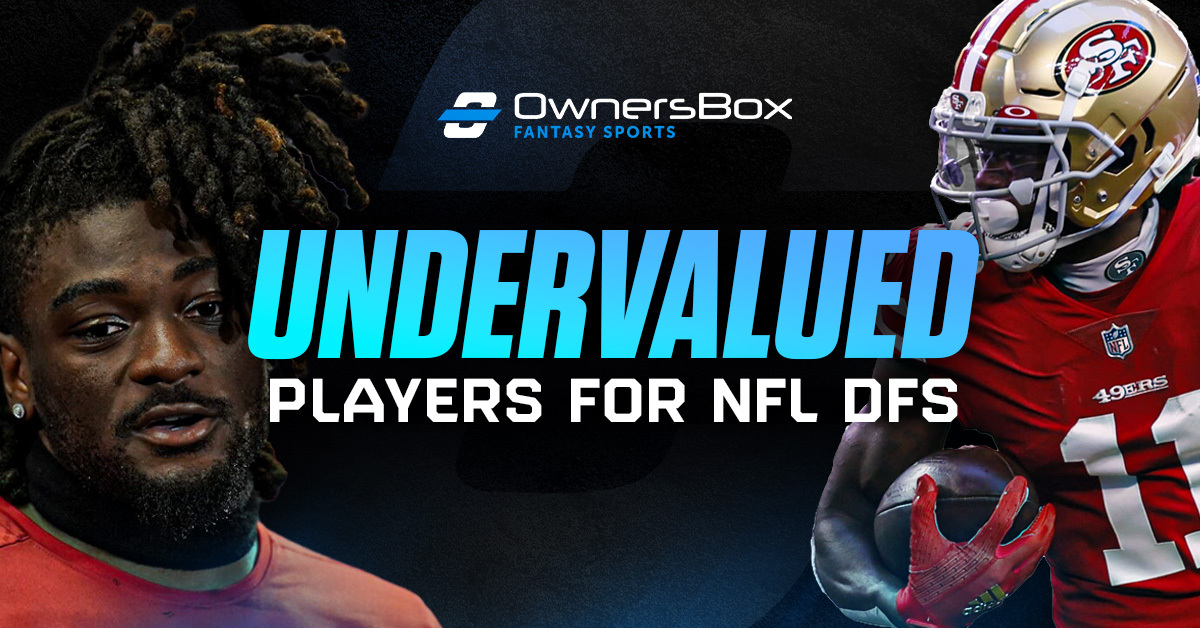 Here we are folks, NFL DFS for Week 1 is finally here on OwnersBox. When we are looking at the player slates for the $100K Sunday Smash contest, I wanted to dig deep into some players that I think are undervalued, based on their price or how much they should be started in NFL Week 1.

All the coach speak from camp has been that Brandon Aiyuk has been Trey Lance’s favorite target. Aiyuk started last season in Kyle Shanahan’s dog house, due to some poor practice habits and concerns about overall professionalism, but by the end of the season Aiyuk found his groove and became more involved. Last year in his matchup with the Bears, Aiyuk had 7 targets which he turned into 4 receptions for 45 yards. In his last 5 games of last season including the playoffs, Aiyuk only had one game where he saw less than 6 targets, and that was in the snow bowl in Green Bay.

Rolling right, Fred Warner in his face, hits Brandon Aiyuk on the move with Charvarius Ward in coverage. 🎯 pic.twitter.com/1kGzXNo1me

I think Trey Lance has more arm strength than Jimmy G to this point of their careers, and should be able to lead a more dynamic offense getting Aiyuk more invloved. If the plan is to play Deebo out wide more than in a running back position this season, Aiyuk shouldn’t be going up against number 1 corners. The Bears secondary is ranked 30th according to Sharp Football Analysis and are poised to start rookie Kyler Gordon at nickel corner.

If Aiyuk and Trey Lance really have as good chemistry as some of the beat reporters have mentioned, Brandon Aiyuk could well outperform his salary in Week 1 and be an excellent wide receiver for NFL DFS lineups.

There has been a ton of coach speak on the strides that Rhamondre Stevenson could take heading into Week 1. Bill Belichick usually likes to run his backs into the ground on the last year of their contracts, and that’s what is going on with Damien Harris but, Rhamondre Stevenson was a really good back last season. Stevenson and Harris were named co-starters on the first depth chart of the season, and some of the reports coming out on Rhamondre in camp this year were talking about how he could be used a lot more in the passing game. Let’s not forget that Ownersbox contests use a PPR format which could be super valuable.

Teams didn’t run on the Dolphins a lot last year, only 39.32% of opponents plays were rushing attempts, to the tune of 4.4 yards/rush and 0.9 rush TD’s/game which weren’t great numbers for the defense. Should Stevenson get involved in the passing game, his upside could be through the roof in Week 1.

Toney (leg) wasn’t listed on the Giants’ injury report Wednesday, Dan Salomone of the team’s official site reports. None of the receivers around this price have the target upside that Kadarious Toney had last year with Daniel Jones. From Week 4 to Week 11 and including Week 16, Toney had 4 games where he got 9 or more targets befoire injuries derailed his season. Kadarious Toney demands targets with how good of a player he is. When I’m looking at players who are undervalued, I’m looking for a guy who can bust open a big game, and Toney can do that.

The Titans defense ranked dead last, last year to the wide receiver position, so Toney should have a chance to repeat a Week 5 Cowboys-esque performance. I like the upside and Daniel Jones’ ability to get him the ball for him to outperform his price.

Click here to sign-up at OwnersBox for a FREE $10 entry into an NFL week 1 contest with fantasy sports promo code ‘DFS10’!