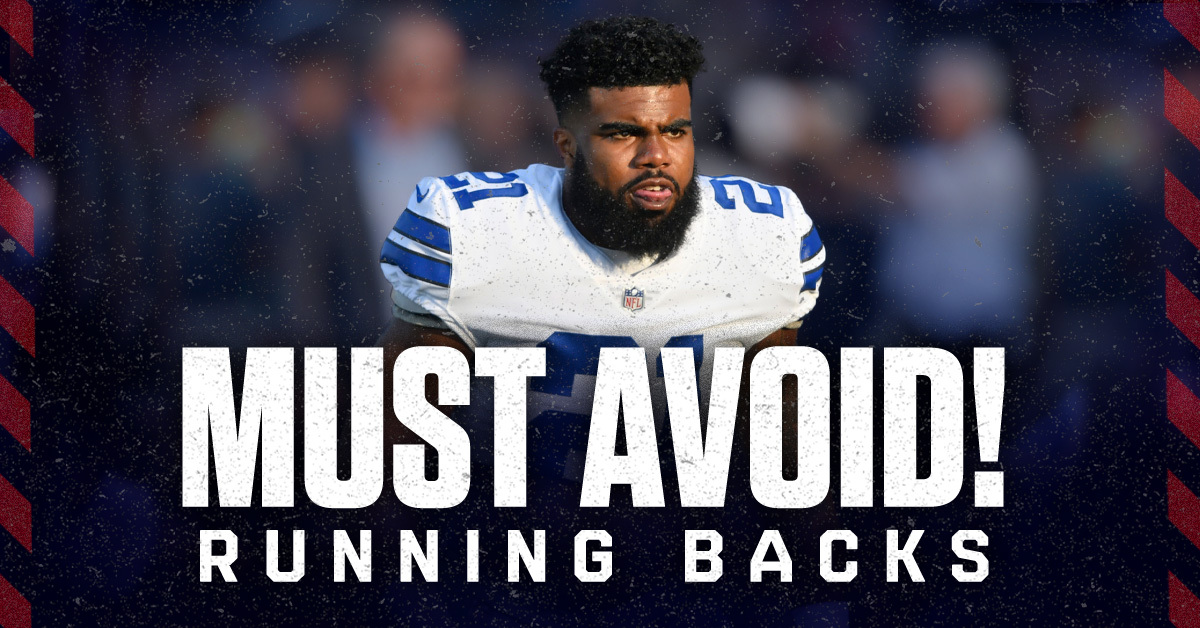 Here is a look at three must avoid running backs for the 2022 Fantasy Football season.  As fantasy owners get closer to their drafts, it’s always good to know which players you should avoid drafting. Here are my takes on which Fantasy Football running backs owners should avoid when drafting their team for the 2022 NFL season. These are players who I believe will drastically underperform their ADP, an example of this from last season is Saquon Barkley who was drafted as the RB8 and finished as the RB35.

Ezekiel Elliot has been on a downward decline ever since 2018. His touches have gone down every year from 381 in 2018 to 284 in 2022. As a result, Tony Pollard’s touches have gone up yearly since 2019, he had 169 last season. Zeke actually had an all-time low opportunity share last year of just 57.7%, down from his 90.1% in 2018. Elliott has not been an efficient runner for multiple seasons now, and his opportunity share last season was similar to players like Devin Singletary and Clyde Edwards-Helaire.

Almost all of Zeke’s fantasy value from last season came from his 12 total touchdowns, which was sixth-best in the NFL. He is not a true three-down bell-cow back anymore and has become somewhat of a touchdown or bust player. Additionally, he has only finished as a top-12 fantasy RB in 35% of games in the last two seasons. Zeke is ranked 19th in our running back rankings, as we believe he will underperform his ADP.

Elijah Mitchell has bust candidate written all over him. Last season, Mitchell had the 13th highest snap share and third highest opportunity share, but only finished as the RB26. This is because of how frustratingly inefficient he is running the ball. Last season, he ranked 54th in fantasy points per opportunity (0.73), 34th in yards created per touch (2.38), and 142nd in expected points added (-19.4).

I know we don’t like to credit or blame the RBs but Elijah Mitchell was 37th out of 40 RBs in rushing yards over expected in 2021 pic.twitter.com/BgdtQ2KxWo

The main reason I am fading Mitchell this season is because of how the 49ers deploy their running backs. Mitchell’s 207 carries are the most ever by a Kyle Shanahan running back and were caused by injuries in the running back room. Seven different running backs had carries for San Francisco last season, and they could not seem to find someone they like outside of Mitchell.

In the offseason, they brought back three running backs from last season, Trey Sermon, Jeff Wilson, and JaMycal Hasty. While they also drafting Tyrion Davis-Price and signing Jordan Mason. I believe the 49ers will have a RB by committee approach next season, and I do not trust Mitchell to stay as their RB1 for the entire season.

Chase Edmonds is another guy who screams bust to me. Similar to the first two backs I talked about, Edmonds was not a very efficient runner last season, and James Connor basically took his entire role by week nine. Last season, he ranked 84th in expected points added (-2.1), and 34th in yards created. Additionally, he has very limited usage in the red zone and had just 2 rushing touchdowns last season. Edmonds has 217 carries in the NFL, and only one has come inside the opponents 6-yard line.

Duke Johnson and Chase Edmonds have the same amount of targets since 2018.

What are we really chasing here
He’s a side chick

In 2021 the Dolphins averaged the eighth most passing attempts per game at 36.2. This number is only expected to rise with the addition of Tyreek Hill, who had 159 targets last season. Additionally, Tua is expected to take a jump in his third NFL season, and become the focal point of this offense. The Dolphins also have a terrible run-blocking offensive line and their PFF grade ranked last in the NFL. Edmonds is not a player who has touchdown upside, and if he is not an efficient runner I don’t know how he could finish as a top 35 running back.