Quarterbacks That Should Breakout in 2022 Fantasy Football 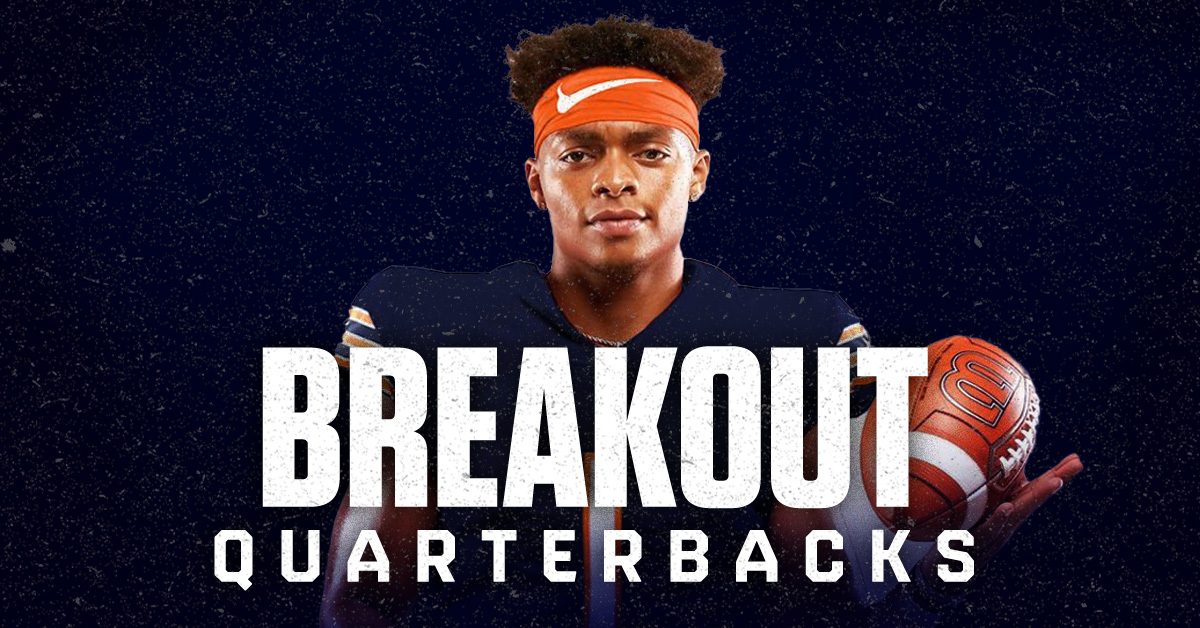 Two quarterbacks that fit this mold last year were Jalen Hurts and Joe Burrow. The recipe for success here is just not being given the opportunity the year before and then developing over the offseason as they familiarize themselves with the offensive schemes, which both of these players did. Burrow’s a little bit of an exception because he had a season-ending knee injury in 2020, but he was drafted in around the 10th-11th round and finished as the QB8 averaging just over 20 fantasy points per game.

I think Daniel Jones and Justin Fields fit this mold this year as quarterback sleepers that can breakout.

I think Justin Fields will take a big step forward this year and should be on all Fantasy Football owners’ lists as a quarterback sleeper. One of the reasons is the coaching change. No matter what angle you look at this, Matt Nagy took this offense in the wrong direction with his inconsistent play-calling.

Matt Eberflus brought in Luke Getsy from the Packers who will be bringing over a wide zone run-heavy offensive scheme. The same reason why I think Fields will have success is the same reason why Khalil Herbert is one of my running back sleepers for the 2022 Fantasy Football season.

Justin Fields is ready to take that Year 2 leap 🚀 pic.twitter.com/J9cwVY4Nuk

Establishing an efficient running game is crucial for Fields’ success. Fields’ four best games last year came when the Bears had their team’s best rushing performances (Detroit, Las Vegas, Pittsburgh, San Francisco). In two of those four weeks, Field finished as the QB3 and QB9. Not to mention, in his last two healthy weeks of the 2021 season he finished as the QB8 (Week 14) and QB10 (Week 15).

If the Bears’ new run-heavy offense works, Fields will become even more valuable because of the increase in his rushing volume. Despite the lack of receiving options, I think Fields can be a valuable spot starter in a lot of 2022 Fantasy Football leagues.

There are a number of reasons why I think Daniel Jones can be a viable option at quarterback for the 2022 Fantasy Football season. For starters, he has the easiest strength of schedule for QBs. Pair that with the new offensive mind of Brian Daboll and some key weapons, and Daniel Jones is looking like a tasty quarterback sleeper. We have the Giants signal caller as our QB17 in our quarterback rankings heading into the year.

Daboll ran one of the most explosive offensives in the NFL over the last two seasons. Now, Daniel Jones isn’t Josh Allen, but it’s not a stretch to say they have some similarities. Jones has shown flashes of his athleticism, especially with his legs. One of the reasons why Josh Allen has been such a good Fantasy Football quarterback is his red zone volume. Allen had the most passing attempts (123) within the red zone last season, which produced 28 passing touchdowns.

I think Daboll is going to give Jones a real chance in this offense. According to the Athletic’s Dan Duggan, the Giants want to unleash quarterback Daniel Jones this season. Jones had a surprisingly great start to the 2021 Fantasy Football season. Before getting concussed in Week 5, Jones averaged 23.3 points per game and was the QB8.

I think Daboll can unlock his true potential here, especially as they continued to bolster this offensive line by drafting Evan Neal. Not to mention, he still has Kenny Golloday, Ka’Darius Toney, and Saquon Barkley to help him get there. Not saying Daniel Jones should be your A1 starter, but he’s a great option in 2 QB or superflex leagues.