What will the Kings do at the NBA Trade Deadline?

What will the Kings do at the NBA Trade Deadline?

As we approach the Feb. 10 NBA trade deadline, one team has emerged as the most intriguing buyers on the market. In the midst of another disappointing season, the Sacramento Kings will likely look to shake things up before the deadline and make some notable moves. Let’s take a look at who they can offer, who they might pursue, their best course of action and how we got here.

The Kings’ last playoff appearance was in 2006, and the 15-year playoff drought is by far the longest in the NBA. Since that appearance, Sacramento has won just 37.7% of its games, the second-lowest mark in the Association. The Kings have been a moribund franchise for more than a decade, and there’s no reason to keep losing with such a promising tandem of young guards in Tyrese Haliburton and De’Aaron Fox.

De’Aaron Fox
He’s in the midst of a down year but still averaging 21.0 points, 5.2 assists, 3.8 rebounds and 1.2 steals per game. Turnovers and lack of a three-point game have always been notable aspects of his game, but Fox is one of the most athletic guards in the NBA and an incredible finisher at the rim. He averaged better than 25 points and seven dimes a season ago, and there’s obviously room for him to be even better than he was in 2020-21.

Tyrese Haliburton
The second-year guard was in consideration for Rookie of the Year honors in 2020-21 after a strong season, and he’s doing more of the same in Year 2. In four games without Fox from Dec. 17-22, Haliburton averaged 23.5 points, 11.5 rebounds, 4.5 rebounds, 2.8 triples and 2.0 steals. He’s more than capable of running an offense and operating as a primary scorer.

Buddy Hield
Buddy Buckets is one of the best three-point shooters in the NBA right now and shaping up to be one of the best of all time. He’s one of four players in NBA history to average at least 3.0 triples per game for his career alongside Steph Curry, Duncan Robinson and Damian Lillard. Hield is knocking down 3.5 triples at a 38.3% clip this season, and he’s hit at least 3.4 per game in four straight seasons.

Harrison Barnes
Barnes has averaged 16.3 points, 6.0 rebounds and 2.0 triples this season. He can play either forward position and offers scoring, rebounding and threes that should be highly valued to most NBA teams.

Marvin Bagley
The No. 2 pick hasn’t panned out to this point in his career, and a change of scenery could do wonders to inject some life into his career. Bagley appeared in 62 games as a rookie but just 56 total over the next two seasons. Bagley isn’t a strong defender or passer, doesn’t have much of a three-point game and shoots poorly for a big.

1st Round picks
The Kings own all of their first-round picks for the foreseeable future which will likely be used in any potential deals.

The Kings have a few glaring needs, most notably rebounding and playmaking. The team is currently 23rd in assist ratio and 18th in offensive rating. An additional reliable scorer would also be welcomed. Sacramento is also 26th in rebound percentage, and the team allows the third-most offensive rebounds per game at 11.4. This has led to 15.1 second-chance points allowed, which ranks 29th in the NBA.

Domantas Sabonis
The two-time All-Star averaged 19.4 points, 12.2 rebounds, 5.8 assists and 1.0 steals over the last two seasons. He’s established himself as a premier scorer, rebounder and facilitator and is likely on his way to a third straight All-Star nod with averages of 19.0 points, 11.9 rebounds, 4.9 assists, 1.0 steal and 57.7 FG% this season.

Myles Turner
Turner offers a unique combination of defense and floor-stretching abilities and would be a prized addition to most teams in the NBA. Turner is a two-time blocks champ and leads the league in that category this season. He’s averaged at least two blocks per contest in five seasons overall. He’s averaged 2.8 blocks and 1.4 triples over the last four seasons, and he’s averaging 12.9 points, 7.1 rebounds, 2.8 blocks and 1.5 threes this season. Turner isn’t a tremendous rebounder, but his ability to operate as a stretch five would add another dimension to this Kings’ offense. None of Richaun Holmes, Alex Len or Tristan Thompson have an outside game.

Ben Simmons
Simmons’ struggles from deep and from the free-throw line have been well documented since he came into the league, but what he can bring to the table is absolutely intriguing as a nearly seven-foot-tall point guard who pass, rebound and defend at an elite level. If he ended up in Sacramento, it would either cause floor-spacing problems with De’Aaron Fox or stunt the development of Tyrese Haliburton. Sacramento shouldn’t pursue Simmons.

Jerami Grant
In 78 games with the Pistons, Grant has averaged 21.2 points, 2.0 triples, 1.1 blocks and 0.9 steals. He can provide Sacramento with quality scoring, threes and defense.

Al Horford
The oldest player listed as an option for Sacramento, Horford brings a high basketball IQ, defense, passing, shooting, spacing and rebounding to the table. He could be a great addition to the frontcourt at PF alongside Richaun Holmes. A potential deal with Boston involving Marvin Bagley or Harrison Barnes could make sense for both sides.

The Kings apparently have Ben Simmons at the top of their list of trade targets with Sabonis second. There have been a number of articles and tweets that give credence to the idea that Sacramento would be willing to move Fox or Haliburton, but there have been a number of other articles and tweets to suggest that both guards are off-limits and will form Sacramento’s core for years to come. If that’s the case, I can’t envision a Simmons trade happening. Darly Morey’s asking price will be more than Buddy Hield, Harrison Barnes and Marvin Bagley.

The most likely scenario then is a trade for Jerami Grant centered around Buddy Hield. Detroit is 26th in made threes and 29th in 3PT% at 31.5%. Adding one of the best three-point shooters in the NBA should do wonders to help out this team. Losing Grant might sting, but both sides are apparently ready to part ways, so a return of Hield and a future first-round pick might be the best available haul. If the Kings wanted to sweeten the deal, they could include Harrison Barnes and/or Marvin Bagley, with Detroit sending Kelly Olynyk and including another low-impact player so that salaries match.

If the Kings are able to entice Detroit to give up Grant for Hield and a pick, Barnes and Bagley could be used to acquire an additional impact player, such as Al Horford. He doesn’t fit with the young core rebuild, but he would be an upgrade to Bagley with his defensive abilities, floor spacing and ability to find teammates. A Horford-Schroder deal for Barnes and Bagley could pan out for both sides. Boston would get more offense from the forward spot and could choose to keep Bagley and develop him while moving off of Horford’s expensive contract. 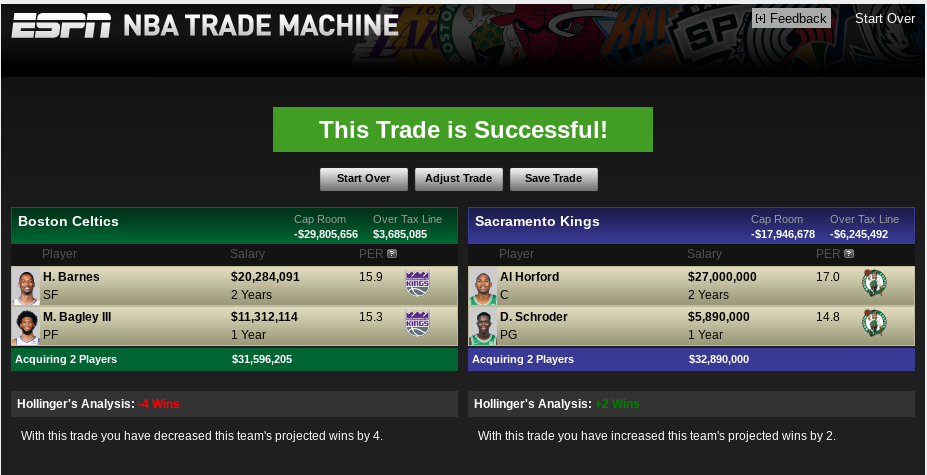 If Fox is available, a Fox for Sabonis trade makes a ton of sense. Tyrese Haliburton could take over as the team’s primary ball-handler in a role in which he’s excelled this season. The addition of Sabonis could immediately improve the team’s dreadful rebounding and second-chance points while providing elite scoring and playmaking in the frontcourt. The fit alongside Richaun Holmes could be an issue, as Holmes is a player who thrives in the paint, as opposed to Sabonis’ current teammate in Myles Turner.

Play Weekly Fantasy Basketball on OwnersBox for FREE using code “NBA10” for a $10 entry! Our $1K Contest of the Week starts every Friday and new contests are being played daily. Check out the NBA page on the blog for more basketball content!