I recently got together with some very talented minds in the fantasy basketball industry and completed a rest-of-season draft for a 9-cat roto format. It was a great exercise to see how we all value players for the second half of the season and to see just how different the draft board looks compared to September and October.

Injuries caused precipitous falls for Paul George, Damian Lillard, Kevin Durant, and Lonzo Ball. Ja Morant, Miles Bridges, and Tyrese Haliburton are some of the biggest risers, and there was a notable uptick in rookies that included Evan Mobley, Scottie Barnes, Franz Wagner, and Herb Jones – all guys who were typically selected after pick 100 or left undrafted. Oh, how the times have changed.

I had a ton of fun participating in this draft, and I think I snagged some great value with Garland and Time Lord as my third and fourth picks. I reached a little bit with Mo Bamba in the sixth round but found a gem in Anfernee Simons in Round 5.

Here’s the full breakdown with some notable picks from each stage of the draft.

No surprises here as Nikola Jokic went first off the board. Steph Curry has gone ice cold as of late, and Joel Embiid is in the midst of an incredible heater. Embiid has been the NBA’s highest scorer since Christmas and has risen quickly up the fantasy ranks and MVP leaderboards. It wasn’t shocking to see him go off the board at No. 2.

The usual suspects followed Joker in the first round, though Luka going this early felt like a surprise considering he’s ranked 22nd in 9-cat leagues. The upside is there for top-15 value, but this still felt like a reach. Fred VanVleet was a second-round draft pick this season but is ranked 10th on the year. There’s no reason he or any of the other players (besides Luka) taken in the first round can’t continue that level of production moving forward.

Rudy Gobert and Chris Paul were highly undervalued in fantasy drafts as they typically are, but we made up for that here, with both going inside the top-20. Tyrese Haliburton has been incredible this season, and there’s optimism he can be even better if Sacramento moves on from De’Aaron Fox by the trade deadline.

Due to a lengthy injury layoff, Anthony Davis fell all the way to 18th, but he can be a top-10 player if he stays on the court. Dejounte Murray was drafted in the third or fourth round (and sometimes later) but has proven to be a second-round guy with first-round potential due to his stat-stuffing abilities.

Some notable players slipped in these rounds. DeMar DeRozan has been a first-round guy for much of the season, so snagging him at 22 was a value to be sure. Kristaps Porzingis doesn’t get the respect he deserves as a consistent top-15 producer this season, and he wasn’t selected until pick 33.

Bam Adebayo has lost a lot of his luster this season due to the Kyle Lowry effect. Bam’s assist numbers have fallen off considerably, and he ranks 58th per game, a far cry from his second-round ADP.

Kevin Durant is expected out until the end of February at the earliest due to a knee injury, but he’s ranked second on the season in per-game production. Grabbing him at 26 felt appropriate given the games he’ll miss.

Miles Bridges is probably the biggest steal in fantasy drafts this season thanks to his eighth to ninth-round ADP and third-round ranking. He’s enjoying a career-best season and is firmly in the conversation for Most Improved Player. Just like Bridges, Darius Garland is in the midst of his best season ever and ranks 33rd on the season. I snagged him at 29, and it felt so good. 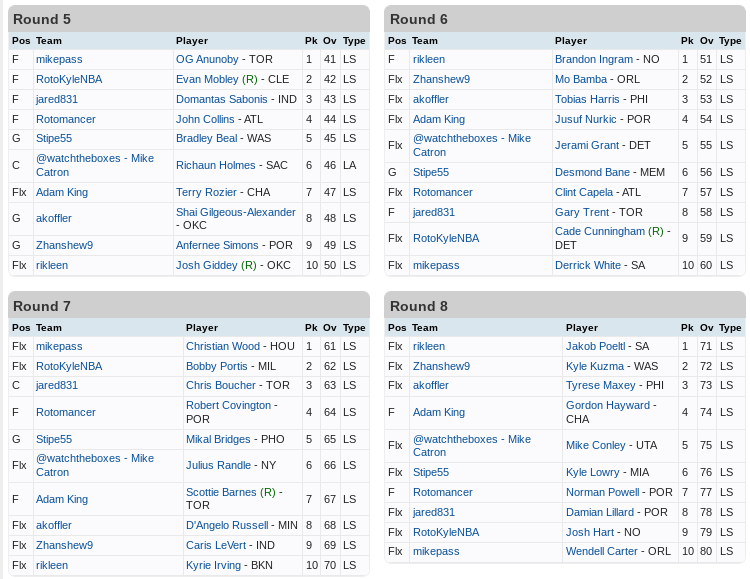 Evan Mobley is another huge riser, and he got taken at pick 42. The play of Mobley and Jarrett Allen has been nothing short of incredible this season, and Cleveland should be a playoff team without the help of LeBron James for the first time since 1998. After his Most Improved Player award a season ago, Randle’s ADP climbed into the 30’s and as high as the upper 20’s in some drafts. His efficiency has gone down the toilet this season (along with New York’s playoff hopes), and he wasn’t selected until pick 66. That’s the right spot.

Bradley Beal and Shail Gilgeous-Alexander haven’t played up to snuff this season, but going at 45 and 48 respectively was a bit too low. I’m quite happy that I snagged Anfernee Simons at 49, as I expect him to return second-to-third-round value the rest of the way. I can’t imagine Damian Lillard (taken at 78) returning this season, so Simons should continue to post some gaudy stat lines. Desmond Bane went at 56, and he’s in contention with Miles Bridges, Evan Mobley, and Jarrett Allen for best fantasy value. Bane was drafted outside the top-100 and typically after De’Anthony Melton, but he’s soared in his second season for the surging Grizzlies.

One of the most polarizing players in the NBA, Kyrie Irving went at 70. He can only play away games, but when he’s available, he can offer first-round value. It’s another calculated risk in the seventh round, but it’s one that can certainly pay off in a big way. 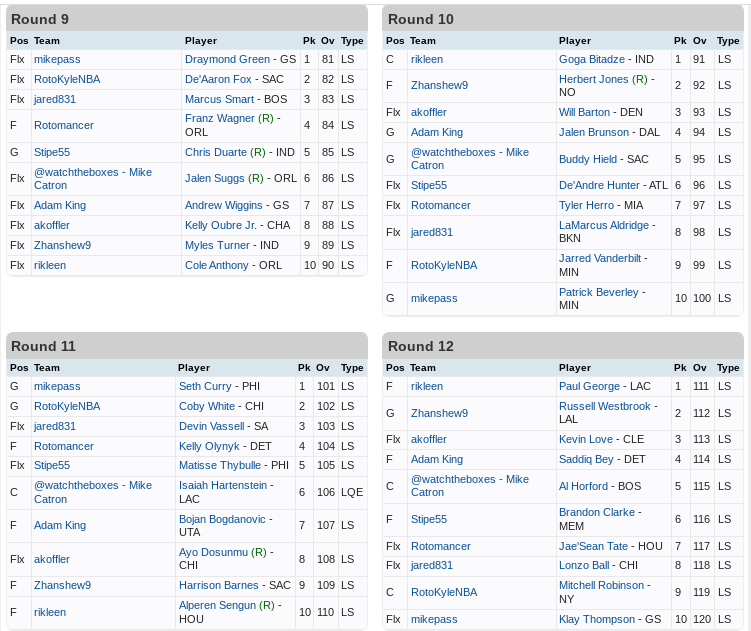 Draymond Green is injured, so he fell to 81, but prior to his injury, he ranked 54th in per-game production. This was a nice value pick so late in the draft and a calculated risk. I found it interesting that De’Aaron Fox went right in the same range as Marcus Smart, Chris Duarte and Franz Wagner. It’s a testament to how well the rookies have played and far Fox has fallen. The same can be said of Russell Westbrook, who I took at 112. He hasn’t been great recently, making some Shaqtin’ a Fool-worthy highlights with shots that clunk off the top of the backboard. Even with all of the negativity surrounding him, Westbrook is better than 112, so I feel like I got some great value, despite the trash talk from everyone in the draft room.

Ayo Dosunmu has been on fire lately, and he ranks 83rd per game over the last two weeks. Injuries to Lonzo Ball (drafted at 118, ranked 29th on the season) and Alex Caruso have propelled him into the starting lineup, and he’s flourished in that role. Goga Bitadze went at 91, which is totally appropriate. He should start for as long as Myles Turner/Domantas Sabonis are out.

The last pick certainly wasn’t Mr. Irrelevant, as Klay Thompson can put up some monster numbers when he’s hot. He’s shaking off the rust of a two-year layoff, so grabbing him at 120 felt like a real steal.

Play Weekly Fantasy Basketball on OwnersBox for FREE using code “NBA10” for a $10 entry! New 7-day contests start daily on OwnersBox! Check out the NBA page on the blog for more basketball content!