We’re halfway through the season, so what can we learn from three months of NBA action? It’s time for a little reflection, as we hand out some mid-season fantasy basketball awards. We’ll be sure to revisit these at the end of the season, but here’s how every award shakes out as of now. Happy New Year, everyone! 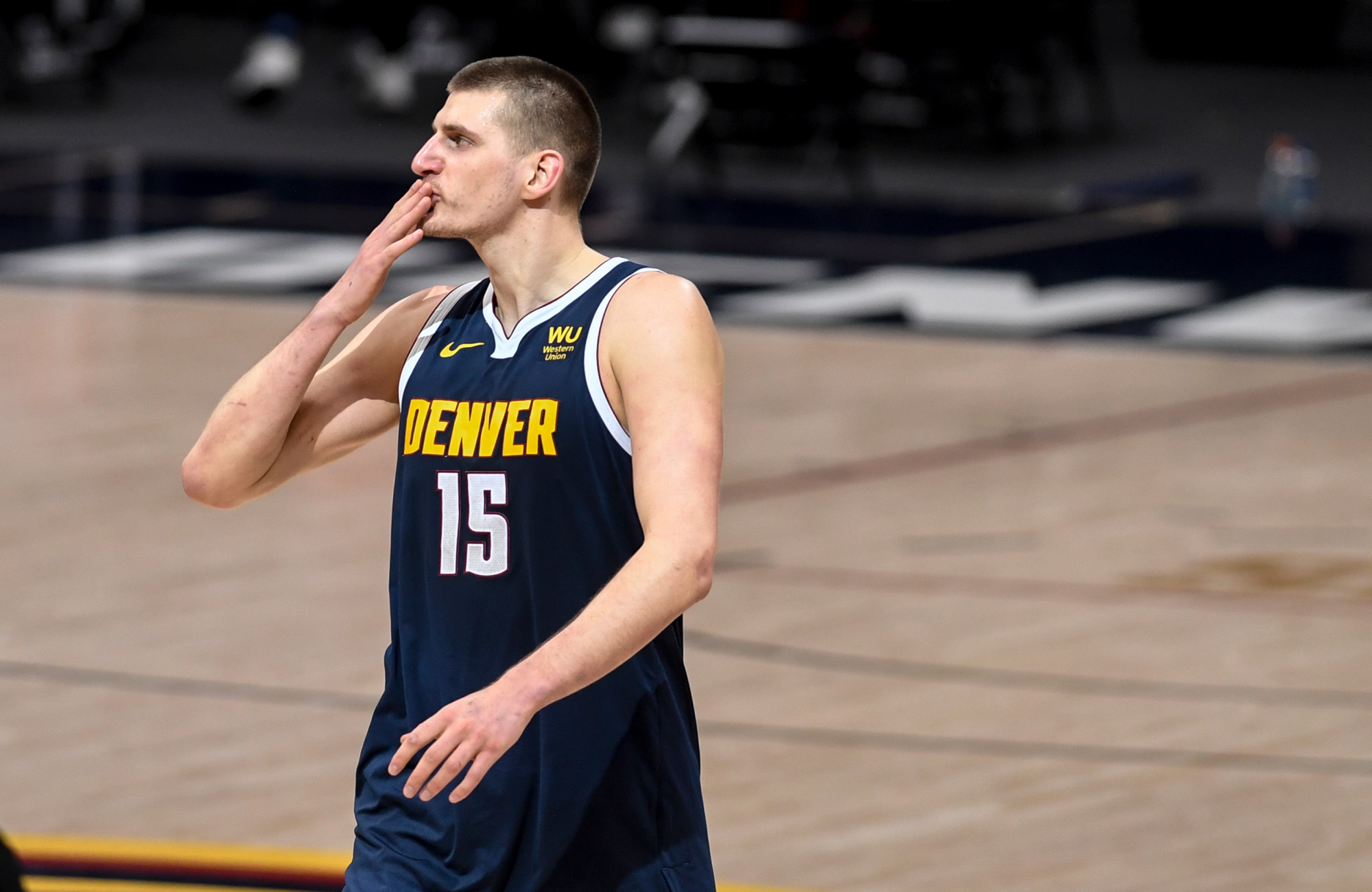 Could there really be another? Jokic was drafted as the first or second player off the board in most fantasy drafts this season, and he’s lived up to that ridiculous draft capital by posting ridiculous numbers for the second straight season. He’s averaging 25/14/7 while making threes, blocking shots, shooting efficiently from the free-throw line, pulling down boards at a career-high rate and posing as a triple-double threat every time he takes the court. Arguments can be made for Steph Curry, LeBron James, or James Harden, but the Joker is the MVP at the mid-point.

I would’ve been fine awarding this one to Bradley Beal, who was drafted as a first-rounder and is providing sixth-round value this season. I also would have been fine to hand it out to Luka Doncic, who’s currently ranked 37th after being drafted as a back-end first-rounder. Instead, I’m giving the Biggest Bust Award to Christian Wood. Wood was drafted as a third-rounder and is outside the top-120 in 9-cat rankings. His scoring, threes, shooting efficiency and defensive numbers are down, resulting in a remarkably disappointing performance thus far.

Rookie of the Year

By the end of the season, we may be heralding Cade Cunningham or Scottie Barnes as the winner of this award, and Franz Wagner is making a strong push of his own. For now, it’s got to be Mobley. He leads all rookies in per-game and total fantasy value behind 14.1 points, 8.3 boards, 2.4 assists and 1.7 blocks while shooting 48.4% from the field and 78.3% from the charity stripe. He’s posting fourth-round numbers as a rookie and is sure to see his ADP skyrocket next season, potentially into the second round.

Comeback Player of the Year

It’s tough to argue against Morant for this award after he spurned fantasy managers a season ago with a putrid finish of 133 in 9-cat leagues. He’s providing third-round value with some even bigger weeks mixed in thanks to improved efficiency and scoring to go with the usual high assist numbers and a boost in rebounds and steals. Morant has shown an uncanny ability to take over games in Year 3 while making good decisions with the ball and without compromising his efficiency. In his last two games (as of the time of this writing), he’s averaged 37.0 points, 7.0 boards, 4.5 triples, 3.0 dimes and 3.0 stocks in back-to-back wins over the Suns and Lakers. He’s in contention for Most Improved Player

Breakout Player of the Year

There were several players deserving of this award, but I’ve got to give it to Bane. Among my short list for this award, he was the farthest down in ADP at the time of fantasy drafts, and he’s played so far beyond expectations this season. Bane has averaged 17.3 points, 4.3 boards, 2.9 triples, 2.2 dimes, and 1.0 steals with 47/42/94 shooting splits. He’s ranked 61st in 9-cat formats on the season, and he’s ranked 41st over the last week.

There are a lot of great options who I could’ve gone with for this award, but Horford stands out above all. He started out the season posting first-round value, and he’s still riding high with third-round value midway through the fantasy season. Horford was drafted after the seventh round on average and outside the top-100 in many leagues. The move back to Boston has suited him well, as he’s played a key role on both ends of the court, resulting in plenty of fantasy value.

Another tight race between the top-three choices in Jonas Valanciunas, Lonzo Ball, and DeRozan, but DeRozan has to be the winner. He’s putting up second-round numbers and has been in the MVP conversation at various points throughout the season. Ball and JV aren’t far behind him in fantasy production, but DeRozan was drafted after both on average and has enjoyed the best fantasy season of the trio. Of all players who switched teams in the offseason, he’s the clear award-winner.

Gobert is one of the most vanilla fantasy options there is, but he gets the job done. Ranked ninth in total fantasy value last season, he’s eighth this season. He might not be a first-rounder in terms of per-game average, but his ability to stay on the court and post consistently elite numbers makes him a stalwart in roto leagues and an excellent option in weekly head-to-head leagues as well. The big man is seemingly undervalued every season, but he gives you elite rebounds, blocks, FG% and turnovers without hurting you in scoring. There are other guys who deserve consideration here, but Gobert is the man of the hour.

No Risk it, No Biscuit Award

This award is for high-risk fantasy picks with a ton of upside who had some red flags leading into the season, so it’s only natural for Porzingis to win it. Porzy averaged just 49 games per season over his last three campaigns played, and he missed the entire 2018-19 season. After a dreadful playoff performance against the Clippers in Dallas’ first-round loss, KP gave fantasy managers plenty of reasons to doubt him. He went in the fourth or fifth round of most fantasy drafts, but he’s a borderline first-round value thus far, averaging 20.4 points, 7.9 boards, 2.2 dimes, 1.5 triples and 2.5 stocks while shooting 44.4% from the field and 88.5% from the free-throw line.

Turning Back the Clock Award

A lot of folks (myself included) wrote off LeBron this season at his ADP of the first or second round. That wasn’t to say he was predicted to fall off a cliff, just that he wouldn’t live up to his draft capital given the addition of Russell Westbrook, presumed health of Anthony Davis, recent injury history and a new supporting cast. In true LeBron fashion, he’s carried the load from Game 1, posting some incredible numbers and ranking in the top-5 in per-game average in 9-cat formats. He just reached his 36,000th career point, and he hasn’t shown any signs of slowing down. There’s a reason his nickname is “King.”

Collins is a guy who continually amazes me in the realm of fantasy hoops. He’s a guy who doesn’t hurt you in any category, providing at least something useful in all nine. He consistently scores, rebounds, blocks and shoots at a highly efficient level from the field, the free-throw line and three while rarely turning over the ball. Even as Atlanta has added countless quality players to its roster, Collins has stayed steadfast in his elite production. It’s no wonder he’s ranked 35th per-game in 9-cat leagues and consistently outperforms his ADP.

The Best is Yet to Come Award

There have been a lot of amazing performances this season from young guns like Miles Bridges, Desmond Bane, LaMelo Ball, Ja Morant, and the handful of rookies I mentioned above, so the winner of this one is extremely difficult to name. After a long deliberation, I’m handing this award out to Murray, who is ranked 20th in 9-cat leagues and looks like he’ll be a bona fide stud for years to come. Murray ranks fourth in assists (8.8), is tied for third in steals (2.0) and has six triple-doubles under his belt this season. He’s one of only four players in the NBA averaging at least 17 points, eight rebounds and eight assists along with Russell Westbrook, Luka Doncic and James Harden.