Only 6 hitters have 100+ PA, K% below 20% and barrel% above 12%. They are Yordan Alvarez, Christian Walker, Juan Soto, Luis Robert, Freddie Freeman and Anthony Rizzo.

Mike Yastrzemski is slashing .300/.412/.550 since coming back from injury, with career-highs in hard-hit rate and average exit velocity on the season so far. He quietly had a good season last year, after a tough start and he’s been an underrated fantasy asset since 2019 . He’s crushing the ball, top 6% of the league in avg exit velo, a wrc+ of 140 and wOBA of .366. He’s got great bat to ball skills, and an advanced approach with a 95th percentile chase rate. Yastrzemski is a really solid player and a nice pickup if you need outfield help.

Nick Pivetta had a really tough schedule to start the season. The Yankees, Twins and the Blue Jays twice in April alone. Since the end of April: 31 IP, 19 H, 2.03 ERA, 0.77 WHIP, 5 BB, 31 K. Obviously the complete game against the Astros last night is the cherry on top. But I honestly think Pivetta can be relevant in all fantasy formats going forward. Pivetta has a FIP of 3.75 showing he’s pitching better than his ERA would indicate. His curveball has been a really good pitch with a 33% CSW rate and the 24th highest spin rate.

If you need steals in a roto league, Jorge Mateo is probably the best option on a lot of waiver wires. Mateo is the everyday shortstop for the Orioles and is second in the big leagues in steals. His profile doesn’t have a lot of power, but an obp of around .300 should help him keep this stolen base pace. Not much other than a boost to your steals.

Wade hasn’t played much this season due to a knee issue, but how the Giants have used him when he was healthy is the reason I think you need to pick him up. He was the leadoff hitter for 7 of the 8 games that he has started. He is 1B and OF eligible which is always nice to have that flexibility to replace injured players or a bench bat. Wade had 18 Homers and 6 steals in 109 games last season, with an ops of .808. I think Wade is another underrated fantasy asset that you can pick up to help your teams.

Hitting 3 or 4 in the Rays lineup recently but this is a hidden gem on your wires. Especially in deeper leagues, look to pick up Harold Ramirez. 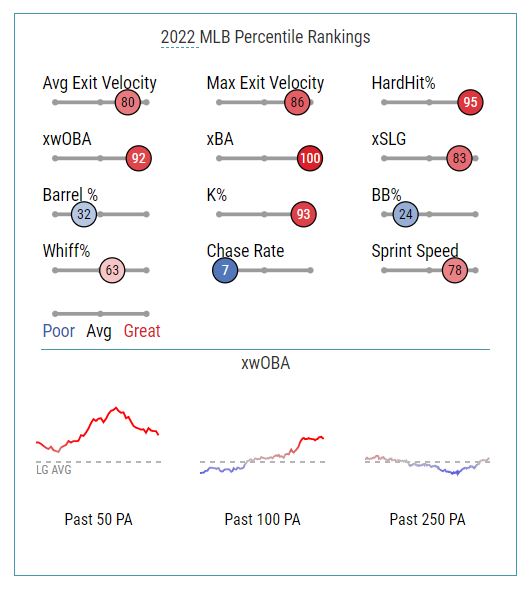 All of these metrics are great but he still has an average launch angle of 0.2 degrees. That will figure itself out as his career average is 4.6 degrees. Ramirez should contribute in 3 categories and could even add a couple steals if the home runs don’t come.