One of the hardest things for me to do in Fantasy Baseball is to drop players. I have a bad habit of thinking any player I have picked up or taken a chance on will figure things out, and obviously that isn’t the case. Cutting ties with a player at the right time can be crucial to continued success in your fantasy leagues. I’m going to dive into 3 players I think you need to drop in your leagues.

Jesus Sanchez got off to a blazing start for the Marlins. The former top prospect hit all 3 of his homeruns in the first week and a half of the season and has been downhill since then. In the last 14 days the slugger has hit .103 with 4 hits and 11 strikeouts, an OPS of .295 a K rate of 26% and a -5 wRC+ in 39 at bats.  Safe to say that is pretty horrible. His statcast profile has also turned ice cold, take a look. 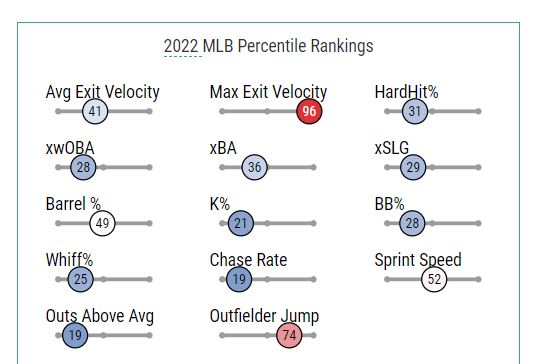 He’s taken a turn for the worse as pitchers have been able to exploit him. The tools are there, but until the homeruns outweigh the swing decisions, we should be cutting ties with Jesus Sanchez.

This is a no-brainer, but boy does it break my heart. The Red Sox have all but given up on Bobby Dalbec at this point. The righty is in a platoon with Franchy Cordero, and has a stud in Triston Casas itching for a big league chance with the Woo Sox. Dalbec has somehow struggled this mightily while running the lowest strikeout percentage of his career at 31%, but also running a career low in AVG (.165), OBP (.238), SLG (.253), wOBA (.227) and wRC+(43).

Dalbec has been exploited by major league pitching this season, but it doesn’t seem to be because of swing decisions. The z-contact % is the best of his career at 76% and the strikeout percentage really hasn’t changed. With all of that information, I look at BABIP which is (.233) the lowest of his young career. I think Bobby can eventually figure it out in spurts, but not yet worth rostering over a full season, even in one of the best batting lineups in MLB. 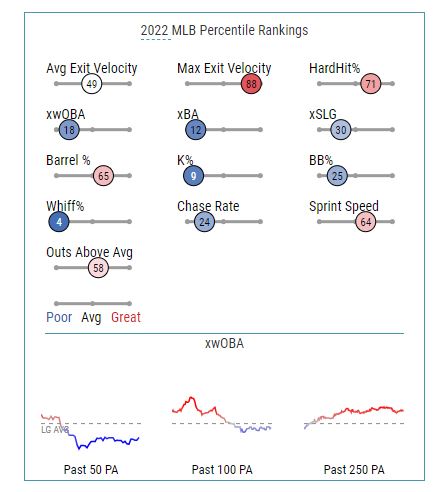 A player who is currently on the IL, I don’t really think Garver is worth holding on to at this point if you can’t stash him in an IL spot. The Rangers backstop got off to a hot start, and a guy I was pretty high on this season at his ADP, but the hits have dried up, and the park he plays at isn’t playing towards his power potential. Let’s take a look at his stat cast metrics. 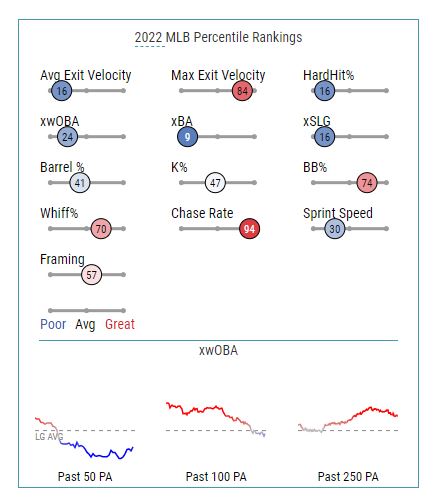 The chase rate and BB% are the only things that would excite me if I were in a league that OBP counts in the scoring system. Other than those, this is a pretty weak profile. His strikeout percentage is the lowest of his career, his wOBA is .289 and he has a wRC+ of 93. Mitch Garver is a guy that I would love to find favorable matchups for to plug in play, but would hurt my average with not enough power output to be an everyday guy in my leagues.