The All-Star break has come and gone, and the next big thing on the season is the trade deadline. I wanted to dive into a couple Fantasy Baseball players that I believe are going to have a big second half, whether it be breaking out, or a destination change that will help them out in a big way.

Vinnie Pasquantino’s start to his big league career may be disappointing if you just look at the counting stats, but if you dive deeper into the numbers, you could see there is a lot of reason to like what he’s done so far. Let’s compare some of the actual stats, to the expected stats for the left handed slugger.

These numbers are very similar to what Alex Kiriloff did at the midway point of last season. He is an elite hitter with really good quality of contract metrics as well as an advanced approach at the plate. Even if he doesn’t explode in the second half like I expect him to, I think its a really good dynasty buy. If he is on your wire, or even available via a trade due to some injury issues on your team, it’s a guy I want to go out and get.

No one in baseball has had more home runs taken away from them than Trey Mancini. Mancini has 9 actual homeruns and 16.1 xHR and that is because of the stupid left field wall at Camden Yards. But, Mancini is preparing to play his final games as a member of the Orioles and a change of scenery would really help Mancini’s numbers in the second half. 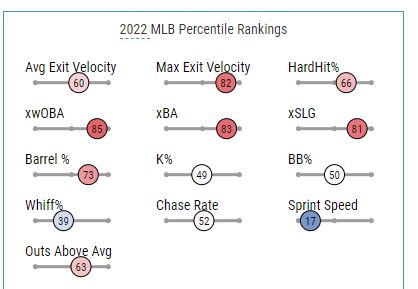 He has a .339 wOBA, a wRC+ of 113 and an xBA of .273. His xBA, xwOBA and xSLG are all greater than the 82nd percentile. I think Mancini is a pretty cheap player to try and acquire at this point of the season, and would want to acquire him before he gets an awesome park upgrade.

Going to go with another player that I expect to be dealt in Luis Castillo. The numbers have been fantastic in a nice bounce back season for the righty, the only issue? Wins. In your ROTO leagues we’re getting hurt with his lack of production in that category and it isn’t really his fault. If he gets traded to a contender, he should have no problem fixing that, and could easily be a top 20 arm for the rest of the season.

He has a 3.26 xERA and a 3.05 FIP.  His xSLG and Barrel % are over the 80th percentile. Let’s also look at the metrics on one of the best fastballs in baseball.