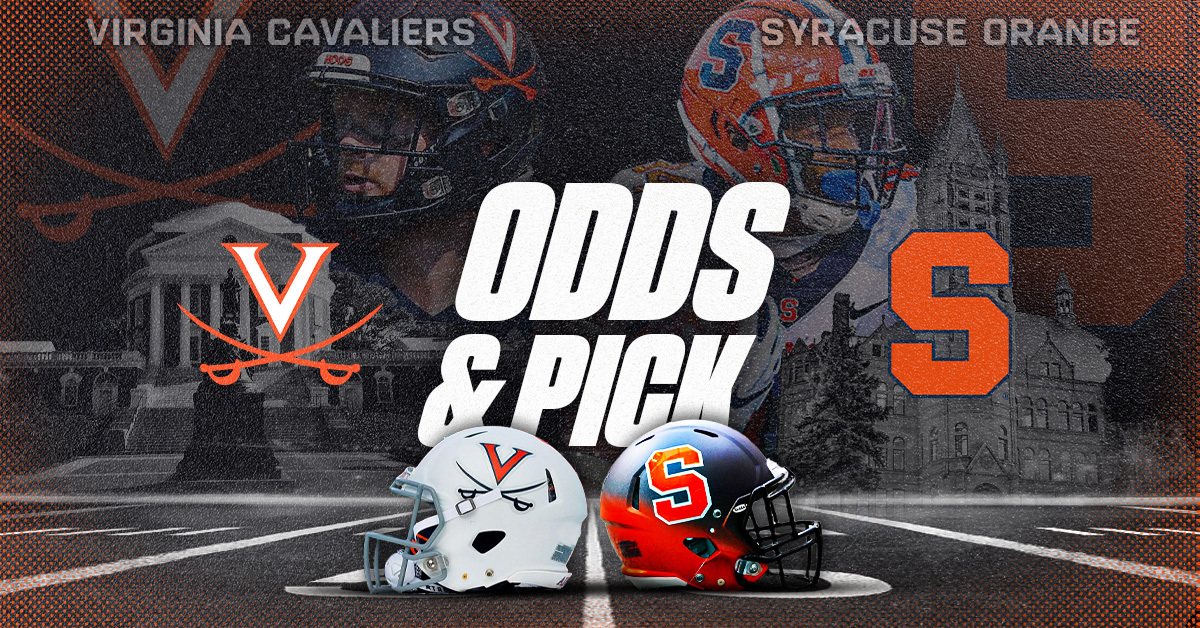 When the 2021 college football season came to an end you’d have much different expectations for where these teams would sit three weeks into the 2022 season. Bronco Mendenhall and the Cavaliers were on the rise with Brennan Armstrong at QB and Dino Babers job looked to be on the brink with the Orange. Fast forward to today and the Cuse are significant college football betting favorites in the Virginia vs Syracuse odds.

Syracuse currently sits at 3-0, with statement wins over Louisville and Purdue. While Virginia is 2-1, it hasn’t exactly been pretty, with a -2 point differential and a 2-point win at home over Old Dominion. So how will this game shake out with the Orange being two score favorites on Friday night?

New York sports betting markets list Syracuse as 9-point favorites in the college football betting odds for Friday night of week 4. The Orange have been profitable favorites lately, in the last 5 years they are 12-7-1 against the spread, at home though that drops to 7-6-1 ATS. Meanwhile, in that same time span Virginia is 10-11 ATS as a road underdog.

Virginia sports betting markets have the Cavaliers paying +270 on the moneyline! If you sign-up at DraftKings Sportsbook and bet $5 you’ll instantly receive $200 in free bets! Bet on college football this weekend by clicking the banner below to take advantage of the welcome offer.

A lot has changed since Virginia’s 6-6 2021 season came to a close, with Mendenhall surprisingly stepping away Tony Elliott is now the head coach. The former Clemson offensive coordinator does not have this offense operating anywhere near last seasons output. Some of that isn’t surprising as they lost a number of pieces from last season. But with Brennan Armstrong still at QB the fall off wasn’t expected to be this far.

The biggest problem is the revamped offensive line that has looked horrendous through three weeks. Sports Info Solutions gives them a points above average in pass blocking of -6.31, only six FBS teams are worse. It’s no better in the run game either. With Elliott having an offensive background at Clemson he’s had his hands on the offense, trying to make it more balanced then last season, passing the ball on a modest 52.3% of plays.

There are only six teams that return less on the defensive side of the ball then Virginia, but that might not be a bad thing. They allowed 466 yards and 32 points per game in 2021. Bringing in former Air Force DC John Rudzinski has made an impact early on. The position group that may be strongest is their front 4, led by Miami OH transfer Kam Butler, who’s already posted 2.5 tackles for loss and 2.0 sacks this season.

Can Syracuse Continue Their Hot Start?

The Orange are off to an incredible start to the 2022 season after finishing 5-7 and tied for last is the ACC Atlantic last season. That credit should go to their offense, that has reinvented itself after the loss of Tommy DeVito. Running back Sean Tucker and quarterback Garrett Shrader have led a dynamic offense that’s been able to stay ahead of the chains.

Syracuse is 15th in the nation in returning production for 2022, so it’s benefitted early to have that familiarity across the board. With these two dynamic runners on offense they’ve made the ground game a focus, running the ball on 58.6% of plays. The offensive line has been able to create space for their runners, ranking 27th in points above average in run blocking per SIS.

This weekend we won Syracuse 32 Purdue 29. I'm pleased with the outcome of the game. You have to love 3-0. I'm not pleased with my performance, I expect more from myself. The grind never stops nor will #34! I rushed for 42yds and 2 rec for 23yds. #PL34SED pic.twitter.com/kVhU93P3un

The defense was stout in week 1 against Louisville but did have some trouble against Purdue’s pass happy offense. The Boilermakers threw for 424 yards and 3 touchdowns through the air. The pass rush has been able to generate pressure but hasn’t been able to convert those into sacks, with a 6.4% sack rate that ranks 80th in the country.

There’s a lot to learn from the first few weeks of the season, it’s important to not continue holding onto last seasons narratives. Both these teams look very different schematically from last season and that’s something we can find value on.

John Rudzinski has consistently fielded elite run defenses while at Air Force, in all four of his seasons in that role his team was at least top-35 against the run. He’s now working with better talent and I think the success of his scheme will translate because of that. After getting carved up by Illinois on the ground the Cavaliers bounced back to allow just 89 rushing yards 30 attempts against Old Dominion.

The Orange haven’t been playing at a fast pace so far this season, ranking 76th in seconds per play. I don’t think they’ll run away with this game so I’m taking their team total under 31.5 points on Friday night.