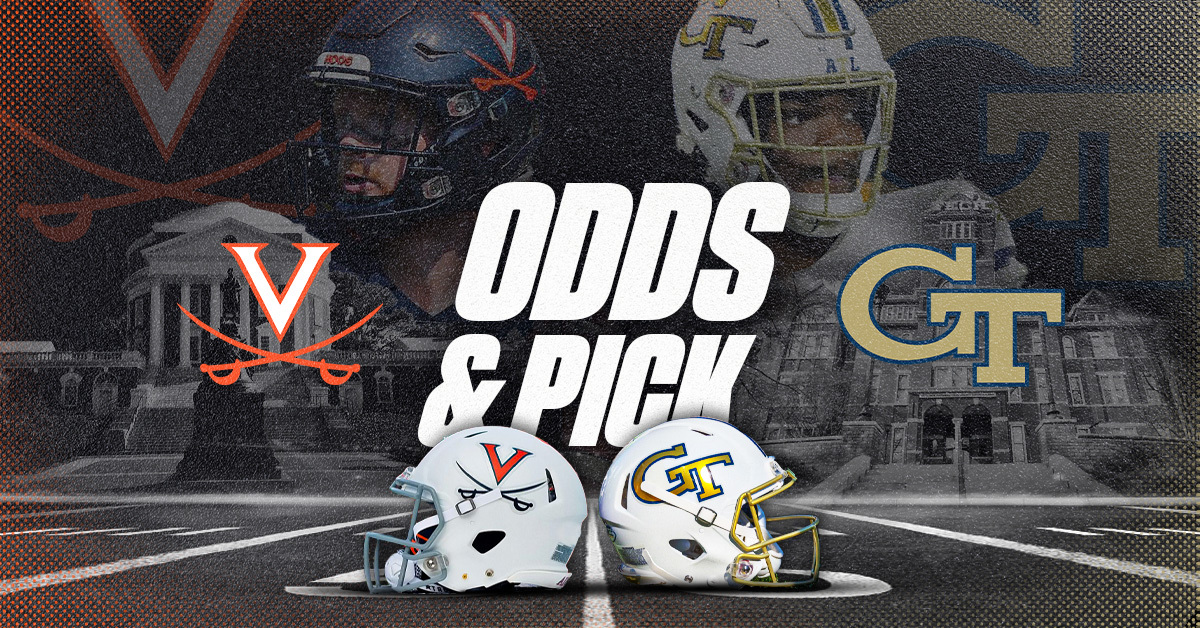 As we get later into the fall, college football season just gets better. Late October is a nice teaser, with college football now being played from Thursday through Saturday. November though, that’s perhaps the best month of the year, with the MAC offering us CFB five out of seven days of the week. It’s already week 8, so let’s get our week started with some ACC action in the Virginia vs Georgia Tech odds.

The Cavaliers have struggled mightily this season under Tony Elliott, they’ve yet to pick up a conference win. Falling to Syracuse, Duke and Louisville in consecutive weeks. Meanwhile, after getting off to a 1-3 start and firing Geoff Collins, Georgia Tech has won back-to-back games, with both being in-conference against Pittsburgh and Duke.

Virginia sports betting markets list the Cavaliers as short underdogs on the road. Virginia is 0-3 straight up and 1-2 against the spread on the road this season. Both Virginia and Georgia Tech have been two of the most profitable teams to the under in 2022, sporting a combined record of 9-1-1. Despite that fact, the total has crept up from it’s opening number of 45.5 to 47 and even 47.5 at BetMGM.

Claim the BetMGM bonus code ‘OWNERSBOX’ for a risk-free bet up to $1,000 this college football season!

This was not the type of fall off many expected from the Cavaliers in 2022, losing Bronco Mendenhall and offensive coordinator Robert Anae has crushed the offense. It’s not all on the playcalling though, quarterback Brennan Armstrong has been running for his life. Virginia ranks 115th in opponent stuff rate and 116th in opponent pressure rate.

When your offensive line can’t create holes or time for your playmakers, things get ugly in a hurry. 15.5% of Virginia offensive possessions end in 0 or negative yards and 43.1% of offensive drives don’t result in a first down. Those numbers are both outside of the top-100 in the nation. For a team that throws the ball at a top-20 rate in the country, they’re struggling immensely, their 6.1 yards per attempt is 108th in FBS.

Defensively, the Cavaliers have had to vastly improve, and they’ve answered the bell. They’re not generating a lot of pressure up front, but they’ve been one of the best tackling teams in the ACC. They’ve also been able to limit explosive passing plays, allowing just 6.0 yards per coverage snap.

The Yellow Jackets don’t deploy much of an explosive offense, averaging less than 200 passing yards per game and having an average throw depth of 7.8 yards which is 102nd in the country. Even with such a low average depth of target, they’re still only completing 58.3% of their passes. To make matters worse, quarterback Jeff Sims’ status is up in the air for Thursday night.

Not only is Sims the straw that stirs the drink for the passing game, he’s also averaging 15+ rushing attempts in 2022. Being without him could cause some issues on the ground, the Yellow Jackets desperately need a dual threat running game to keep opponents off-balance. Their opponent stuff rate ranks 8th worst in college football at 30.5%.

Georgia Tech should be able to take advantage of a horrible Virginia offensive line, they’re in the top-50 in both pressure rate and sack rate this season. They’ve also been excellent in coverage, opposing quarterbacks are completing just 57.9% of their passes and averaging just 6.5 yards per attempt.

Best UNDER teams in CFB with margin:

A lot of what we’ve discussed throughout this preview is how bad these offenses have been. Naturally that would lead us to the game total under. But pace of play is important, even with bad offenses you can have enough possessions that they still go over the total. Both teams are in the top-40 in seconds per play, with Virginia ranking 17th.

But what’s kept these teams under the game total this season is their terrible red zone offense, ranking 122nd and 128th respectively in scoring rate. They also just cannot stay on the field offensively, both ranking outside the top-100 in third down conversion rate. The full game under is the way to go in this one.