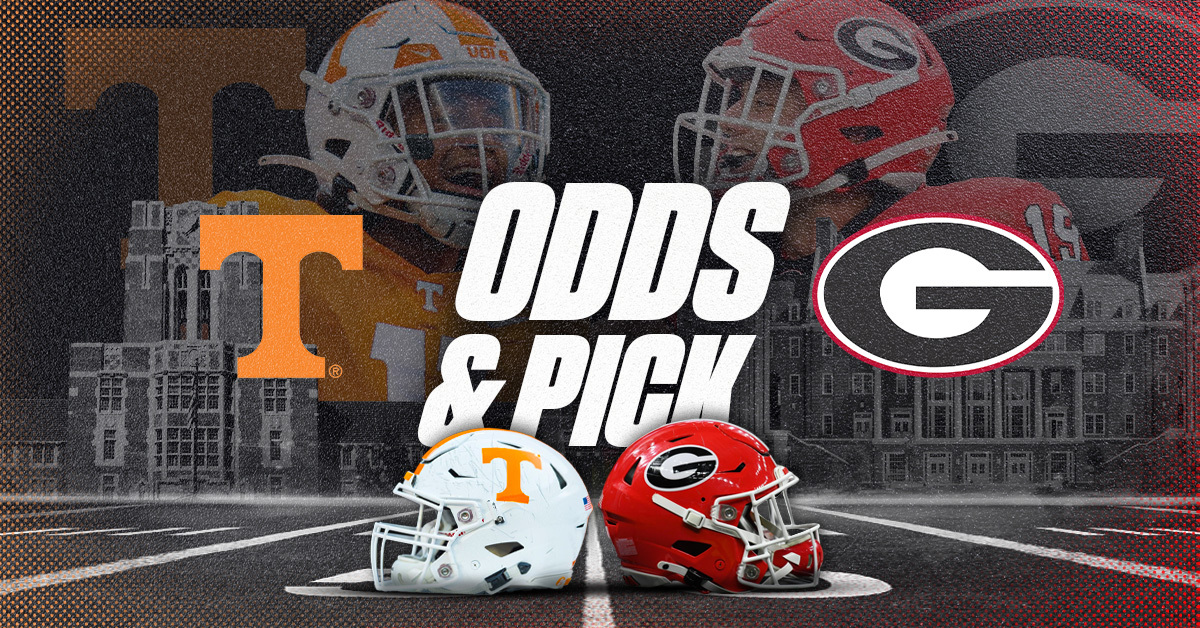 Just like that it’s week 10 of the college football season. November is here, by the end of the month we’ll be deciding conference champions. This matchup in Athens, GA will play a major factor in who represents the East division in the SEC Championship game. The Tennessee vs Georgia odds tell us this game won’t be as close as their #1 and #2 ranking would indicate.

The last time the #1 and #2 ranked teams in the AP Poll met in the regular season was 2011, when LSU beat Alabama 9-6 in overtime. Tennessee sports betting sites aren’t expecting that kind of defensive slugfest, as the game total is listed at 66.5 points.

Let’s take a look at the Tennessee vs Georgia odds before breaking down one of the best matchups of the 2022 college football season.

The Volunteers are the best team in the country against the spread this season, sporting a 7-1 record, highlighted by a 44-6 shellacking of Kentucky last week. The Bulldogs meanwhile, have been one of the most profitable teams for under bettors, cashing in 6 out of 8 games.

Sign-up in Tennessee using the BetMGM bonus code ‘OWNERSBOX’ to receive a $1,000 risk-free bet! Click the banner below, bet on Tennessee moneyline risk-free, and win up 3.4x your money if the Volunteers pull off the upset.

With the College Football Playoff rankings being released on Tuesday, Tennessee was made the #1 seed, meaning that those not betting on college football wouldn’t see this game as an upset. Averaging 47.1 points per game is one thing, doing it in the SEC is another, but being able to do it against Georgia is a whole different animal.

This Volunteers offense is as talented as they come, led by now Heisman favorite Hendon Hooker. He’s has the benefit of being the most well protected quarterback in college football, the offensive line has the lowest pressure rate in FBS. There are plenty of weapons at wide receiver to work with too, with USC transfer Bru McCoy, Jalin Hyatt and Cedric Tillman. The question will be can Jabari Small and Jalen Wright move the ball on the ground enough to keep this Georgia defense guessing.

The defense is rounding into form and perhaps deserves more respect. Especially considering they gave up just 13 points to now #10 LSU, as well as just 6 points to Kentucky. The run defense has been stout, allowing just 3.8 yards per carry and ranking 18th in stuff rate. Can they replicate this success against the Bulldogs?

The Bulldogs are reigning National Champions, they sport one of the most talent rich rosters in all of college football. They’re deserving favorites in this matchup, they have the defensive depth to handle this Josh Heupel scheme. Expect Kirby Smart to better replicate Kentucky’s approach last weekend, where they played under a light box and played with 6-7 defensive backs.

Jalen Carter made his return last week against Florida, playing about 20 snaps at the defensive tackle spot, his availability is massive for Georiga. But the absence of Nolan Smith, who is set to miss the rest of the season with a torn pec, could be a problem as he led the team in sacks. But they’ve got plenty of players in the pipe to fill in, expect this defense to limit explosive pass plays and invite the Vols to run into a light box.

Georgia edge rusher Nolan Smith is out for the rest of the season with a torn pectoral muscle suffered in the Florida game, sources confirm to ESPN. The timeline for his return amid the NFL Draft process is still fluid.

Stetson Bennett and the Bulldogs offense have been incredibly balanced on offense this season, with a 49-51 run-pass split. The offensive line has been a driving factor for their success, ranking in the top-9 in both pressure rate and stuff rate allowed. Daijun Edwards and Kenny McIntosh will be key in attacking this stout Tennessee run defense.

We have two very different offensive attacks when it comes to pace of play, the Volunteers are 6th and the Bulldogs are 108th respectively in seconds per play. I’d lean towards the game being played more towards the slower paced team typically, especially so at home.

Georgia is going to be looking to play red zone roulette here, forcing the Volunteers to drive the distance of the field and limiting over-the-top pass completions. It’ll be an epic matchup of the country’s best red zone offense vs red zone defense. These are the types of things that decide game totals and spreads.

On the offensive side for Georgia, they’ll be looking to win the time of possession battle and keep Hendon Hooker off the field. But that’s going to mean running into a talented Tennessee front four. I like this game to play well under the total.