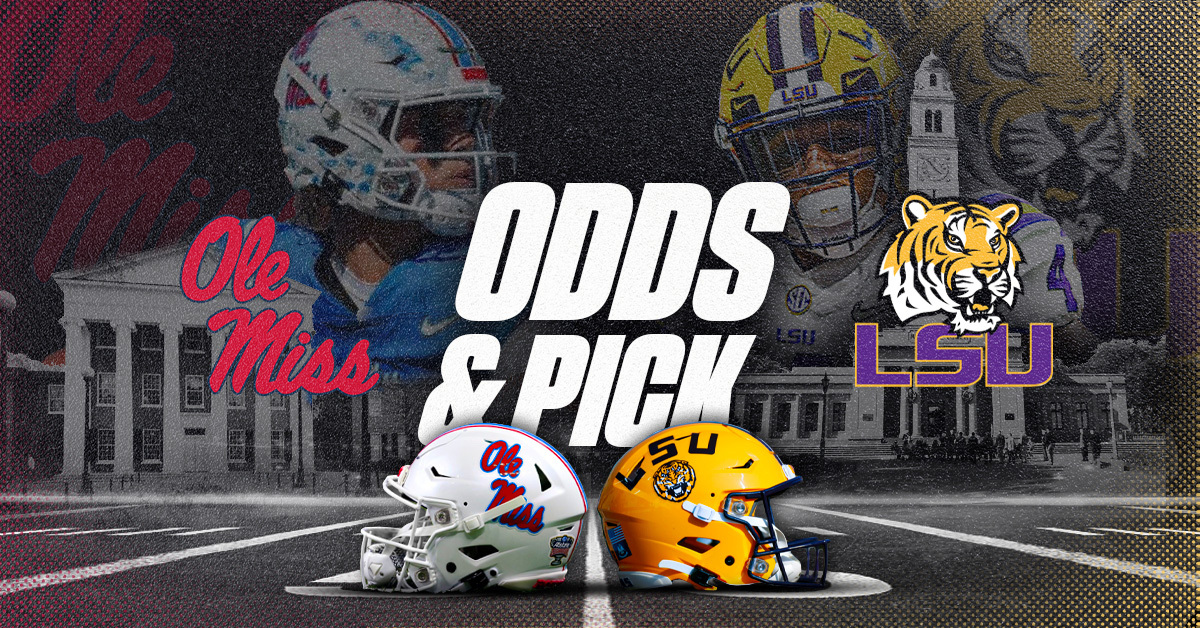 Ole Miss enters Saturday’s matchup versus LSU as road underdogs. The Rebels are 7-0 for the first time since 1962 but this might be their toughest test yet. As for the Tigers, last week they traveled to Florida and beat the gators in The Swamp. Entering this Saturday with a 5-2 record and a 3-1 record in conference, their sole conference loss coming from Tennessee.

As we know… Tennessee upset Alabama in quite the thriller last week. With LSU being favorites in the Ole Miss vs LSU betting odds, it makes you wonder if the Rebels are ready for an atmosphere like Death Valley.

The game kicks off this Saturday, October 22nd at 3:30 PM EST at Tiger Stadium.

Louisiana sports betting markets making the Tigers favorites is likely surprising to the casual fan, as the Rebels are a top-10 ranked team in the country. LSU hasn’t been overly profitable in this spot either, with a 4-4 against the spread record as a home favorite since 2020.

Click here to place a risk-free bet on LSU moneyline up to $1,000 this weekend at BetMGM!

The Rebels entered the 2022 season with the third best odds to win the SEC. Last season they won 10 games with Matt Corral at quarterback, who left for the 2022 NFL Draft. USC transfer Jaxson Dart has filled Corral’s shoes quite well for a transfer coming into a new school, throwing for 1488 yards and 11 touchdowns in his first seven games.

The one question I have regarding the Ole Miss quarterback involves his accuracy and ability to perform against good defenses, he has six interceptions on the year. Four of the six coming against SEC opponents. His best performance coming against Vanderbilt, throwing for 448 yards and three touchdowns.

With the Rebels being two-point underdogs in the Ole Miss vs LSU betting odds, it makes me believe that sportsbooks also doubt that Dart is ready to face a tough LSU defense on the road in Baton Rouge.

I expect this to be Dart’s biggest challenge yet, needing to rely heavily on Quinshon Judkins and Zach Evans to move the ball effectively down the field. The two racked up 275 yards rushing on 46 carries versus Auburn last week.

When LSU is mentioned in any conversation, the first player that comes to mind is Jayden Daniels. He is the heart and soul of this LSU team, leading the team in both passing and rushing, racking up 10 passing touchdowns and 6 rushing touchdowns in seven games.

This will be the first real road test for this Ole Miss team, they haven’t played in any true hostile environments this season. Death Valley reigns supreme in terms of causing mistakes and I expect this LSU run defense to slow down the Rebels rush game.

BJ Ojulari, the brother of New York Giants edge defender, Azeez Ojulari, has put up one of the best pass rush grades in the SEC this season. Accumulating six sacks in the first seven weeks of the season. Look for him to make his presence felt when Dart is put in long down and distance situations.

As mentioned earlier, I believe this is going to be quite the test for Jaxson Dart. LSU should focus heavily on stopping the run and force the Rebels to beat them via the pass. Causing Dart to create more plays with his arm, and as we have seen, Dart has thrown majority of his interceptions versus SEC teams.

According to PFF College, LSU’s rush defense is graded at an 89.1, number two overall in the SEC, right behind Alabama. If this rush defense can put Ole Miss in long down and distance situations, I expect mistakes to be made.

The LSU fans were left disappointed with their blowout loss at home versus a scary Tennessee team. With the great performance versus Florida last week, LSU fans are pumped for another home game against a top ranked Ole Miss team.

I expect a lower scoring game in this matchup, especially with both teams’ defenses matching up well versus the opposition’s offensive strengths. But Jayden Daniels will prove to be too much to handle with his dual threat abilities. Geaux Tigers.