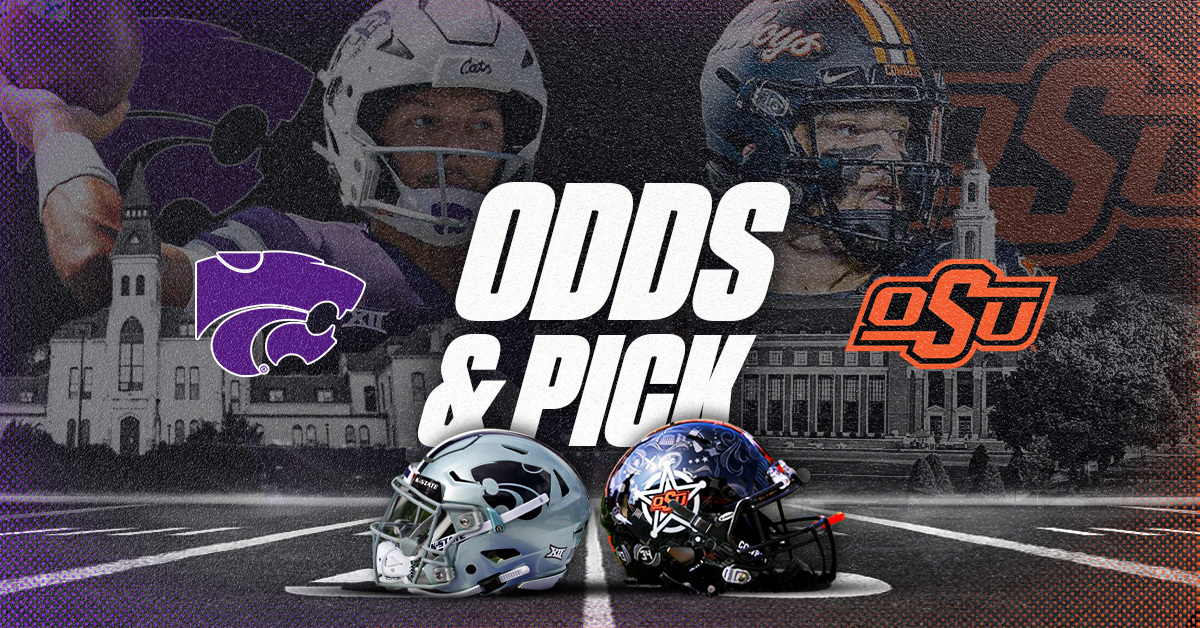 The BIG-12 has become the most entertaining conference in college football this season. The last place team, Iowa State, has lost their four in conference games by an average margin of 3.5 points and every one of them by one score. These exciting games will continue in week 9, the Oklahoma State vs Kansas State odds separate these two teams by less than two points.

Two teams will play for the conference title, TCU is in the drivers seat as they’ve taken down both these teams in back-to-back weeks. Both the Wildcats and Cowboys sit at 3-1 in conference play, a win here and your BIG-12 Championship odds increase significantly. Let’s take a look at the Oklahoma State vs Kansas State odds before previewing this matchup.

I’m surprised to see the Kansas sports betting markets listing the Wildcats as favorites in this one. Quarterback Adrian Martinez is labelled as a true game-time decision and backup Will Howard left the game last week when replacing him. The line being what it is makes me believe one of these two will be available.

Those looking to back Kansas State can do so with Caesars Sportsbook Kansas promo code ‘OWNERSBOXFULL’ and get their first bet on Caesars up to $1,250! Click the banner below to sign-up and claim the offer.

The status of Adrian Martinez is on the minds of many Kansas sports bettors, but I wouldn’t expect to see him. The last real word from Klieman was on Tuesday when he told the media that Martinez didn’t do anything at practice and he was quoted saying “I don’t know if he will be available”. Klieman did say Will Howard will be able to play and he’s had plenty of experience as the starter at K-State.

Regardless of who the starter is, expect this team to lean on the ground game plenty, they’re running the ball on 61.2% of plays this season. They’re doing it quite efficiently as well, ranking 33rd in EPA/rush and running for 5.7 yards per carry. Deuce Vaughn is enjoying another terrific season, averaging 106.3 rushing yards per game.

The strength of the K-State pass defense lies in their secondary, where they rank 30th nationally in EPA/pass. The problem has been against the run, where they’re bottom-10 in broken tackle rate and have just a 17.2% stuff rate.

The Pokes are looking to get the other side of a gauntlet last five week schedule with a 4-1 record. They’ve battled Baylor, Texas Tech, TCU and Texas in consecutive weeks. They are very banged up as a result, Spencer Sanders has been playing through a shoulder injury but he could be without his starting running back Dominic Richardson, as well a few receivers and three (3!) centers. Not to mention a few other injuries on defense.

Oklahoma State plays as fast as anyone in the country and they’re averaging 41.7 points per game because of it. It will be a very contrasting style to that of K-State. If it wasn’t for their pace they wouldn’t be scoring nearly as much, they’re completing just 59% of passes and average just 3.9 yards per carry.

The Cowboys could not stop the run in the first half last week against Texas, but made some excellent adjustments to allow just 3 points in the second half. Stopping the run will of course be the focus, they rank 11th in stuff rate but have allowed opposing RB’s to break far too many tackles. They’re getting stops in important situations though, opponents have just a 40% power success rate which is 3rd in the nation.

Betting an under in a game that Oklahoma State is playing in is pure torture. Their pace of play makes the game last forever, especially at home. The Cowboys are 6-1 to the over this season, while the Wildcats are 3-4. I’m going to leave this total alone here.

Instead I’m going to look to Kansas State on the moneyline. I don’t see a significant downgrade in Will Howard at quarterback but this team will lean on Deuce Vaughn anyways. Unlike Texas last week, I expect K-State to ride their run game for all four quarters. While the defense limits the explosive pass plays from Spencer Sanders and helps them play this game at their pace.