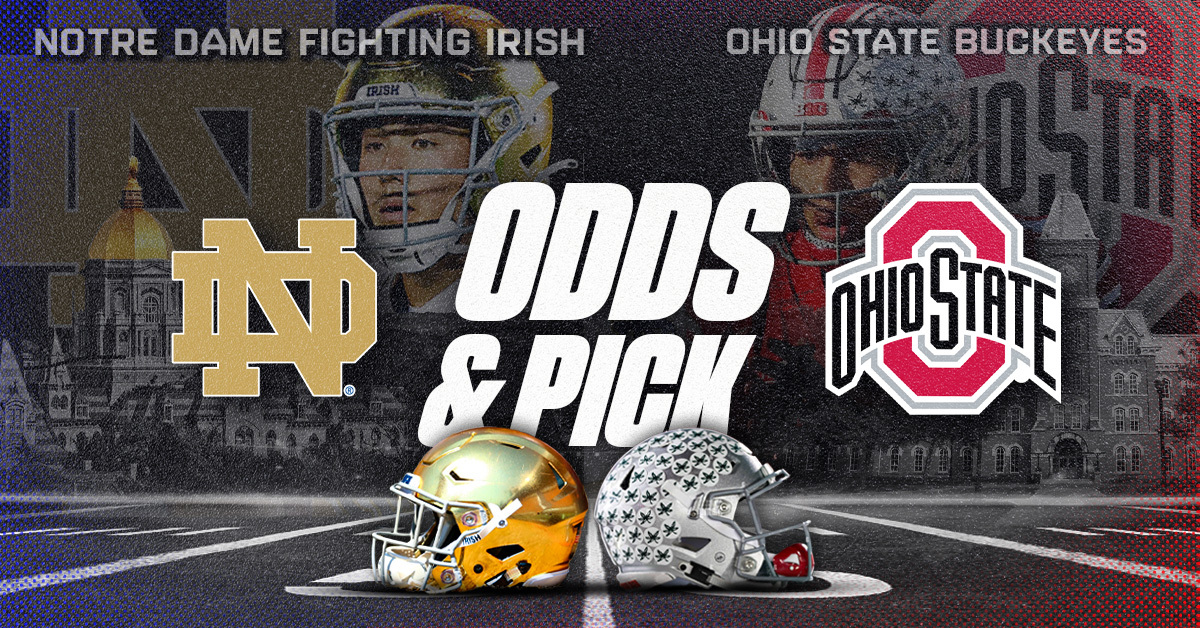 Two national powerhouses meet in Week 1 for the first time since New Year’s Day 2016. The #5 Notre Dame Fighting Irish and first-year head coach Marcus Freeman travel to Columbus, Ohio to take on the #2 Ohio State Buckeyes. The game will take place at Ohio Stadium on Saturday, September 3rd at 7:30PM EST on ABC. The Buckeyes, to no surprise, are 17.0-point favorites in the Notre Dame vs Ohio State odds.

Marcus Freeman returns home to his alma mater to take on an extremely talented Buckeyes team. Let’s take a look at the Notre Dame vs Ohio State odds at BetMGM Sportsbook and see where we can get some value.

Although it’s not legal yet, Ohio online sports betting will be launching on January 1st, 2023.

The Buckeyes and Irish have met only six times previously, with OSU winning the last four games. Notre Dame hasn’t defeated Ohio State since 1936, in a game they won 7-2. In the most recent meeting, Ohio State got four rushing touchdowns from Ezekiel Elliott in a 16-point win (NCAA).

Notre Dame and Ohio State are two of the most storied programs in the country. These two teams have combined for 1,873 wins all time.

Head coach Marcus Freeman took over for Brian Kelly, and there was nothing but excitement for those that stuck around the program. The Irish had an 11-2 record last season, with their two losses coming to Cincinnati and Oklahoma State. The Irish only return 59% production, with 49% returning on offense and 69% (nice) on the defensive side of the ball.

Last year the Notre Dame offense ranked 18th in points per game with 35.2 and had the 43rd most yards per play (5.9). They threw the ball a lot more effectively than they ran the ball – 4.1 yards per rush vs 8.1 yards per pass.

Defensive end Isaiah Foskey and safety Brandon Joseph are great players on the Notre Dame Defense. Foskey tied for the most forced fumbles in the country, and Joseph led the country in interceptions in 2020, but they will definitely miss safety Kyle Hamilton who left for the NFL.

Offensive coordinator Tommy Rees is one of the most conservative play callers in FBS but may need to start freshmen on the offensive line against a revamped Ohio State defense.

What led to some struggle last season if we have to nitpick was on the defensive side of the ball. The Bucks D ranked 31st in opponents points per game and 35th in yards per play. New Buckeye defensive coordinator Jim Knowles was brought in to make this one of the best units in the country.

I am all in on the Ohio State Buckeyes this season, and what is the worst thing they could do this Saturday? Give up points.

I believe that Ohio State and Notre Dame are going to do more than their fair share of scoring, and this total will fly over.